The Marine Corps buckle shown here is a previously unknown Tiffany fake. The majority of the fake buckles marked Tiffany date from the mid to late 1970s although production continued at least through the 1980s.

But all these large buckles marked Tiffany are fantasy items; Tiffany never made any similar items. Marks in all the fantasy buckles were formed in the same crude molds which created the buckles. Marks in authentic bronzes by Tiffany Studios have die-struck marks, authentic marks were not molded.

Sellers of the fake buckles went to the trouble and effort of writing a 90 page book to "document" their forgeries. Titled "Tiffany & Gaylord Express & Exhibition Belt Plates," the book presents altered catalog pages purportedly printed in the 19th century depicting the fantasy buckles. The book has a false copyright date and a fictitious author. Smithsonian expert J. Duncan Campbell exposed the entire belt buckle hoax in his book "New Belt Buckles of the Old West" published in 1973. 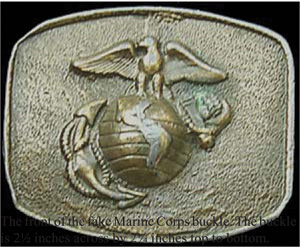 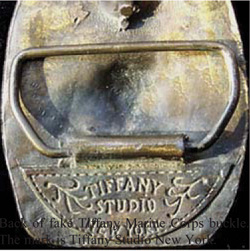