Made in China and Indonesia

Sleek smooth sailing ships have always been admired. From Victorian times to about 1910, "Pond Yachts" gave boys smaller versions of the ships Harold Vanderbilt and Thomas Lipton built in their international sailing matches. Adults, in America and abroad, often devoted countless hours to building models of their own which are now prized as folk art. Either way, as toys or folk art, vintage ships are worth considerable amounts of money.

New replicas of finely made wooden ships have been imported from China and the Philippines. These pieces look very similar to turn-of-the-century originals in both materials used and construction. This article will compare some of the details that separate the new replicas from vintage folk art models and original toy ships.

New ships range in size from 28″ to 43″ in length which is within the range of originals. All are made by hand virtually the same way as old. Decks and hulls are made of individual boards nailed into separate frames. Decks are varnished mahogany; hulls and masts are stained dark and varnished.

Base your evaluation on how the suspected ship is presented: is it being offered as a toy or as a model? If the piece is sold as a toy, it would logically be expected to float. Closely inspect every point where any object is attached to the hull such as rudder shaft, main mast, etc.

Virtually without exception the new replicas have no seals at these points to keep water out; original toys have carefully made seals. Now pick the ship up. All sailing toys require a weighted keel to hold the ship upright against the push of the wind. Any toy without a weighted keel would topple over. The new replicas are not weighted. All the new ships we have seen have Philippine mahogany in the deck; good quality ca. 1900 toys used Honduran mahogany. The varnish on the new hulls is thin and not waterproof; varnish on the old is thick and tough and withstands water.

If the piece is represented as an old model built from scratch or a piece of folk art, pay attention to small details especially any metal work. Most model builders and folk "artists" in particular, were more skilled working with wood than metal. Precision metal work requires expensive machinery while wood can be worked with knives and other common household tools. That is why almost all home builders adapt, rework, or "scrounge" metal already at hand. Most of these pieces are easily recognizable.

This is very obvious in the genuinely old model shown in Fig. 6. In this case, booms are capped by bullets (Fig. 7), the main mast is set in a piece of brass pipe and the rudder is connected by a Rube-Goldberg system scrounged from that coffee can of parts everybody has in their garage or basement. A number of parts are soldered together and are obviously hand made. A wide range of sizes and types of fasteners is also used (screws, nails, glue, pins, etc.).

In short, the majority of old models, built over months or even years, show an individual one-of-a-kind spirit. The builder wasn't going to mass produce ships and did not buy or have made thousands of matching fasteners or metal fittings. New ships, by contrast, show a dull uniformity all the fasteners are basically the same whether used in the hull, deck, masts or rigging. Metal fittings are identical from new ship to new ship.

Construction clues are your best guide to evaluating age but you can also use black light. The new sails have a bright glow to them; most old sails, unless recently washed, do not fluoresce. Most new thread and string used to stitch the sails and in some of the rigging also fluoresces. 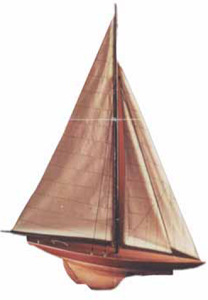 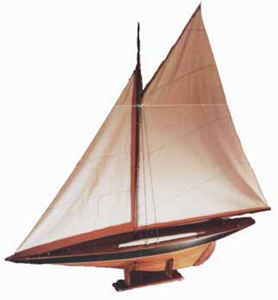 Fig. 3
Parts of a Typical Yacht. 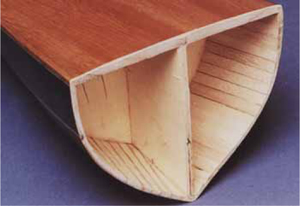 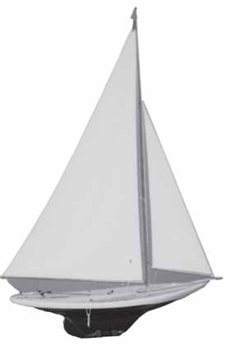 Fig. 6 Authentic made from scratch sailing yacht; 32″ in length, 48″ tall. Constructed with thick varnish, weighted keel, and variety of fasteners and improvised hardware.

Fig. 7 Shell casing and bullet end cap is an example of adapting ordinary items for use on vintage models. 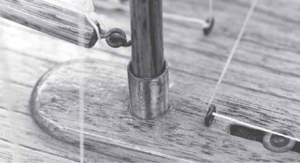 Fig. 8 This old mast is supported in a brass socket above the deck. Masts in new ships go through a hole in the deck which would leak water if actually used for sailing. Note ordinary hardware.

Fig. 9 Another adaptation of scrounged parts in an old model.