New cut glass "liquor jars" and "apothecary show globes" have been made. The new pieces are available in several sizes. So far they are known in 14″, 20″ and 31″. They are available in pink, clear crystal or with various colored overlays including cobalt and electric blue. Names of various liquors are etched, engraved or cut into the fronts such as "WHISKEY," "GIN" and "BRANDY."

Buyers have said the pieces were represented to them as a fixture from an English pub, an advertising piece, from an apothecary shop and similar stories. Wholesale prices for the new pieces were: 14″–$28; 20″–$60; 31″–$175.

These new pieces are based on a late 18th and early 19th century original shape called a wine urn or wine cistern. Although some pieces are attributed to American glass houses, the basic shape and majority of production was from Irish and English glass factories. The basic shape was essentially the same regardless of where the piece was made: a large, goblet-like body with a large, hollow domed foot and cover.

There are several relatively easy ways to separate old from new. The first test begins by examining the spigot, or faucet. Originals were virtually either solid silver or at least silver plated. New spigots are solid brass. Virtually all original spigots fit into a glass neck or glass collar which extends from the body. The neck or collar is generally a separate piece of glass fused while hot to the body or glass worked out of the body during finishing while the glass is hot.

New jars are fastened to a separate glass neck which has been glued to the body. Holes for the necks have simply been drilled by modern carbide tipped bits in the sides of the glass when it was cold. Then the neck is glued into the hole. You can feel the rough hole with your finger by reaching down inside the body. The hole is rough and unpolished. New spigots are also fastened by glue to the new necks. Old spigots were generally plastered in place.

All the new glue is easily detected by long wave black light. The glue fluoresces bright bluish-white. New bodies are also glued to the new bases. You can see the joint fluoresce under black light. The vast majority of original bodies and bases were permanently joined while the glass was hot. Some, but a distinct minority of originals, were joined by metal collars, usually silver and always of the very highest quality and complemented the overall design.

All of the known originals we have handled in person or ever seen in reference books have been clear crystal. Any colored pieces should automatically be suspect and be examined with extra care. Most, but not all, new pieces have etched lettering on the front such as gin, brandy, etc. Only one original we've seen has had a name etched or engraved. That particular piece had the brand of Irish whiskey engraved on the front.

The fit of the lid is not an indication of age. All new lids and the majority of original lids are loose fitting. That is to say the lids and jar rims are not ground to create a tight seal.

New pieces are made in China. They come from the wholesaler without a permanent mark, only a removable paper label. But originals virtually never have a permanent mark either, so the presence or absence of marks is not a reliable clue to age. In fact, if a piece is marked, it is far more likely to be a forgery than an authentic mark.

Overall quality of the glass is poor with lots of streaks and swirls with the occasional unmelted bits of sand, or "seeds." Cutting is also poor with obvious grinding marks and misaligned patterns which frequently show mistakes. Originals show the same care and precision as all other cut glass. That means nearly flawless glass blanks with evenly spaced patterns cut with almost geometric perfection.

We have had reports of the new jars selling for $300-$1,000. If you see these shapes, be sure to get a written receipt that includes the approximate age of manufacture. 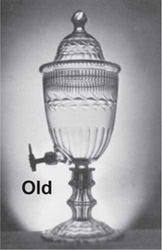 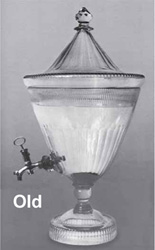 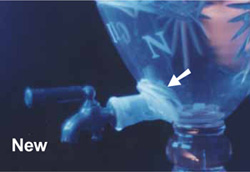 Fig. 5 As seen in black light. The brass spigot and glass neck are glued to the body of the new urns. The glue fluoresces bright white under long wave black light (arrow). 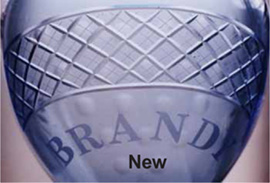 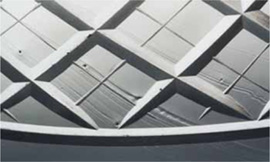