A new line of comic character toy flashlights imitates a highly collectible series of vintage originals. The new lights wholesale for less than one dollar each. Vintage lights with original boxes can sell for $250-$350.

The originals were made in the United States by United States Electric Mfg. Corp. under the trade name Usalite from ca. late 1940s through the 1950s. Original lights are known featuring Roy Rogers, Superman, Lone Ranger and Tom Corbett Space Cadet.

Original lights are about 7 inches long and battery operated. Bodies are lithographed metal with a red plastic top. Original bases are silver-colored metal and pierced with equally spaced holes. Original lights have a three-function switch on the side which operates a regular flashlight bulb, a Morse code flashing bulb and a siren (which is why there are holes in the base).

New lights are made in China and will be so marked. The other name on the packaging is Schylling, an American toy company. The first new lights were advertised in Roy Rogers and Superman versions but other styles could follow. New lights were wholesale priced at six for $4.85. 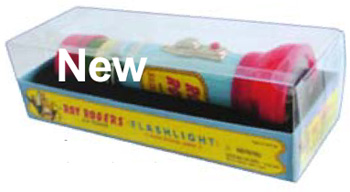