The year 1998 marked the centennial of the Spanish American War. Next to Teddy Roosevelt, that war's leading hero was Admiral George Dewey who commanded the United States naval fleet. Under Dewey, the American fleet attacked and sunk the majority of the Spanish fleet at the Battle of Manila Bay in the Philippines on May 1, 1898. Dewey became an instant hero and his image appeared on everything from whiskey flasks to demitasse spoons and was used to advertise just about every type of product from phonographs to "chocolate segars" on the reproduction tray.

It can be identified as modern because it has the characteristic dot clusters found in modern color printing. It measures 13½" X 10½", made of pressed steel. Full color front; history of chocolate and cocoa is printed in sepia color on reverse. 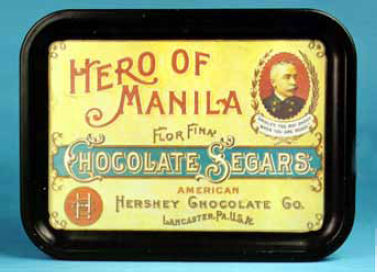