Pressed glass hatchets with George Washington's portrait are widely represented as souvenirs of the 1893 Worlds Fair. Although there are old counterparts, the great majority of these pieces in the market today are reproductions.

The first authentic glass hatchet was introduced at the 1893 Chicago World's Fair by Libbey Glass. Co. Libbey installed a working glass factory on the Fair grounds and sold large numbers of glass souvenirs such as the hatchet. The original Libbey 1893 hatchet was made primarily in clear crystal, but is also known in milk glass and vaseline.

Reproductions of the 1893 hatchet began appearing in catalogs of AA Importing Co., a large reproduction wholesaler, in the mid-1970s. Blades of new hatchets also have the Washington portrait on the front of the blade and World's Fair on the reverse. The most important difference between new and old 1893 hatchets is that the Libbey mark is missing on the new handle. The edge of the new blade is also more rounded, almost semicircular in shape. The original blade is almost straight-edged.

Washington's portrait on the new blade is less lifelike and more cartoon-like. The original portrait is quite realistic and natural. The top of the original hatchet is nicely ground; the same area on the copy is very coarse and rough. If you have a clear example, you can also test it with your black light. The original clear crystal Libbey hatchet fluoresces a bright yellow-green in long wave black light. Clear reproduction hatchets do not fluoresce.

It is likely that Libbey did not actually manufacture the glass hatchets that bear its name. Demand for souvenirs was so great at their 1893 Fair exhibit Libbey couldn't keep up and jobbed out work to other glass shops1. Since Libbey's main product line at the time was cut and engraved glass and colored art glass, they would not have the pressing equipment to produce large quantities of pressed novelties.

The likelihood some other company owned the hatchet mold is reinforced by the mold being used again for the 1904 World's Fair. The reverse of blades produced for that fair are embossed, "World's Fair 1904" are marked in raised letters. The backs of the 1904 handles are marked "St. Louis." No reference is made to Libbey on the St. Louis handle.

After St. Louis, the glass hatchet continued to be produced without the 1904 inscription. It remained a popular souvenir item through the late 1920s. It is most commonly decorated with painted or printed city names or celebrations. Quite a few pieces have names of persons engraved, usually on the handle.

1. Fauster, Carl Libbey Glass since 1818 © 1979, Len Beach Press (out of print). Discussion of Libbey commissioning 1893 souvenirs from outside suppliers discussed on page 229. 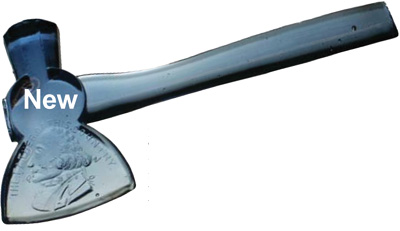 Fig. 1 New 8-inch glass hatchet. The front of the blade is embossed with the portrait of George Washington and the raised lettering, "Father of his country." The reverse of the blade is shown in Fig. 2. 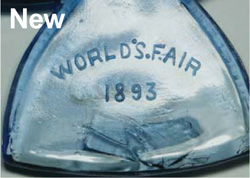 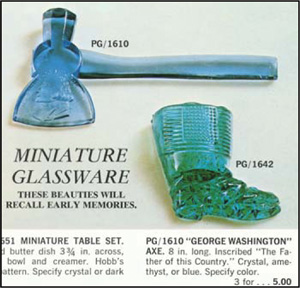 Fig. 3 New glass hatchet in a 1977 catalog of AA Importing Co. The new hatchets were selling then at three for five dollars. Made in crystal, amethyst and blue listed here, plus cobalt blue and turquoise listed in other catalogs. 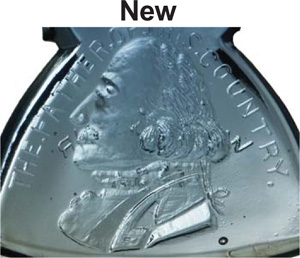 Fig. 4 Washington portrait as it appears on a reproduction AA Importing hatchet (blue glass). Note the bubbles and flaws. Poor detail in the face especially around the eye, cheek, forehead and bridge of the nose. 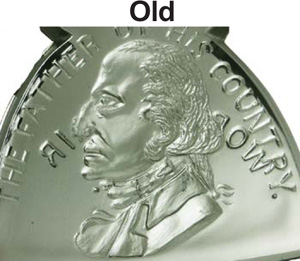 Fig. 5 Portrait in authentic hatchet (clear glass). Note facial detail in bulges around forehead and cheekbone. Well detailed eyelids and bridge of the nose. Very few, if any, bubbles. 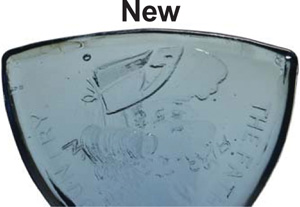 Fig. 6 The edge of the blade in new hatchets is curved resembling a flattened semicircle. 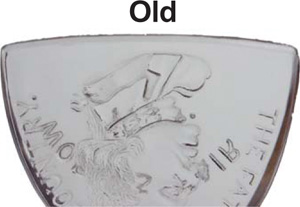 Fig. 9 Tops of original glass hatchets are almost always finished much smoother than the reproductions.