This particular instrument is a clinometer, also known as an anglemeter. Typical uses were to measure angles of cannon, the tilt off vertical of sailing ships, slopes of hills in surveys, etc.

A large variety of new instruments are currently in the market. These include sextants, surveying instruments, telescopes and items used in the building trades. Most are marked with the names of original makers; many are also marked with city names such as London. 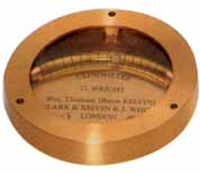