Antiqued and Distressed Wooden Wares from China and India

One style of antique lookalikes in the market is severely distressed and antiqued wooden wares. Many of these pieces include very conspicuous iron fasteners and hardware and often appear with company or brand names. Other pieces are painted in an American folk art style.

The pieces we examined were a mixture of materials and techniques. Some pieces were made entirely from new materials then treated to look old as well as existing pieces from the mid-to-late 20th-century which have been reworked to look much earlier.

The examples shown in this article were all found at antique malls and outdoor markets. A little research though, turned up similar pieces at contemporary furniture stores and decorating centers. Ironically, prices for the pieces openly sold as new in furniture stores were about three to four times higher than the prices on the same items in the antique mall and outdoor markets.

Wooden baskets with lots of metal strapping and metal bracing, for example, were priced $35 - $55 as "antiques", but $95 - $145 as new home "decor". Regardless of where you might see such pieces offered for sale and what the asking price, a few basic tests will help you separate a genuinely old piece from these recent creations.

The "company" and "brand names" on these pieces are hand carved. Virtually all vintage wood crates, chests and display boxes with company and brand names had the lettering applied in ink or paint. The most common method of application was with a stencil, large rubber stamp or silkscreen, not carving.

We found carved lettering up to three-sixteenths of an inch deep in wood only one-half inch thick. This is clearly illogical. Would you really want to weaken a shipping crate by cutting half the strength out of the sides? All these pieces are clearly meant to be "antiques" and not functional, practical pieces of packaging or storage. You may logically expect hand carved lettering in folk art pieces, but never in commercial packaging or storage containers.

There are no specific names or categories of businesses found carved more often than any other. Anything is possible and probable.

One feature shared among most of these new pieces is a peculiar finish that feels very waxy to the touch. The finish is so tacky, it is difficult to simply drag your fingers across an item. This finish is found on both painted surfaces and unfinished wood. It appeared on both pieces offered as "antiques" and the pieces sold as new in furniture stores. The new finish does not show any reaction to ultraviolet light.

Many of these new piece have imitations of construction details only buyers looking for antiques would find of interest. The basket in Fig. 11, for example, has false "pegged" joints. Close inspection reveals the "pegs" are actually thin slices of dowels which have simply been glued to the surface. A number of these thin discs have warped and curled creating a clear gap between the disc and the underlying surface (Figs. 12-14)

Many pieces–especially chests and hinged boxes–have dovetails and box joints normally associated with early 20th century construction. But don't let these details confuse the issue. The carved lettering and waxy finish are more than enough evidence to prove those items are reworked and not period originals.

Another good indication of these recent imports is the presence of nails with unusually large heads. The typical examples in Fig. 21 have almost dime sized heads. Other nail heads we have seen are almost one-half inch in diameter.

Some of the new pieces have "old" repairs, the first we've seen for mass produced reproductions in wood. These include fairly large chunks and pieces of wood such as the example in Fig. 23, which is about 3 x 4 inches. These repairs are covered under the same thick waxy finish found on the entire object.

Unusual and illogical metal braces are another favorite "repair" material. A favorite combination is particularly rough pieces of metal fastened by the large-headed nails.

Whether these new pieces are worth the prices being charged is a decision each buyer must make for themselves. If you like a rustic look, the pieces are probably a good value. Just keep in mind that some sellers may offer these pieces as antiques and price them accordingly. And that would be a very poor value indeed. 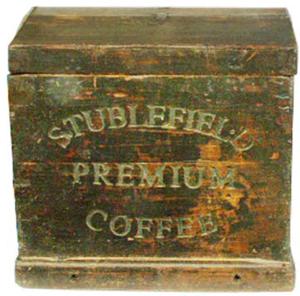 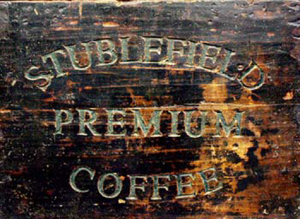 Fig. 2 Detail of lettering on the chest in Fig. 1. These letters are hand carved into the surface to a depth of about one-eighth inch. The vast majority of vintage boxes and chests used for store display or shipping had company or brand names printed or stenciled, not hand carved lettering. 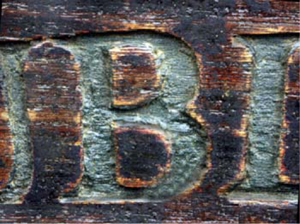 Fig. 3 Detail of lettering carved into the chest shown in Figs. 1-2 Note the rough bottom surface which has been painted black. The only time you might logically expect to find hand carved lettering on a box or chest would be a folk art piece, not a piece of commercial packaging or store display. Commercial pieces were mass produced with printed or stenciled brand names, company names and trademarks. 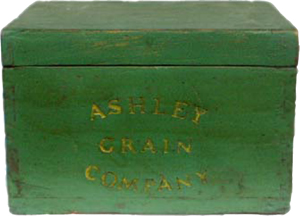 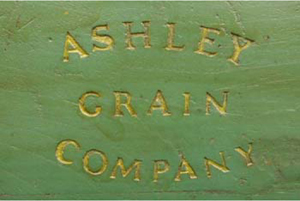 Fig. 5 A closer view of the lettering in the Ashley Grain box. The letters in this example, like the other pieces in this article, average about one-eighth in depth although some are as deep as three-sixteenths of an inch. 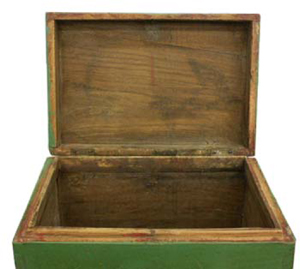 Fig. 6 The inside of the Ashley Grain box shown in Fig. 5. This box dates from mid-20th century but the name and green paint have been recently applied to the exterior. The inside has normal wear with accumulated dirt and discoloration of the wood. 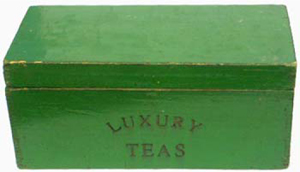 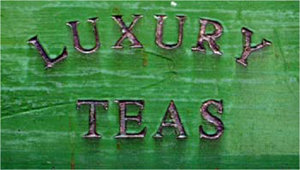 Figs. 7-8 A recently reworked 16 x 7 x 7-inch hinged wooden box, left, is painted green. The box dates from the mid-20th century; the carving and paint is recent. Close up of the hand carved lettering "Luxury Teas," right, is painted black. 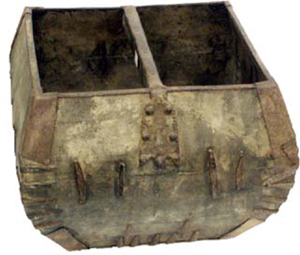 Fig. 9 Wooden basket, 14-inches square by 10-inches tall. Heavily reinforced with unusual metal staples and corner braces. Is this much metal bracing really logical on such a small piece? 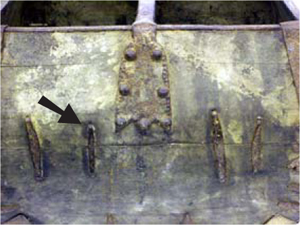 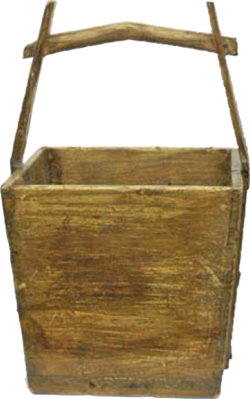 Fig. 11 Large wooden basket, 27-inches tall. The body is made of solid planks about three quarters-inch thick. The finish is extensively antiqued and distressed to appear old.

Fig. 12 The handle on the basket at left appears to be fastened to the body by wooden pegs like these shown above. 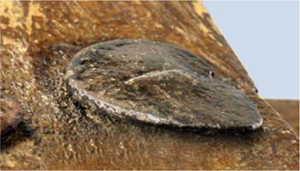 Fig. 13 Close examination of the "pegs" show they are really only thin discs glued to the surface. This disc is curling up showing a distinct gap.

Fig. 14 Illustration shows how the thin wood discs are simply glued to the surface. The illusion of "pegs" is deliberately made to create a false sense of age and period construction. 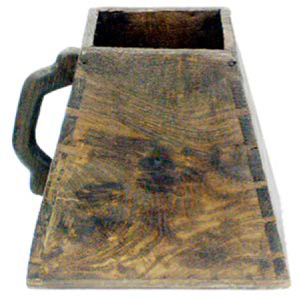 Fig. 15 One of a set of three graduated wooden measures. Sizes range from eight to eleven inches tall. Assembled with large hand-sawn dovetail joints. Covered in a thick waxy finish. 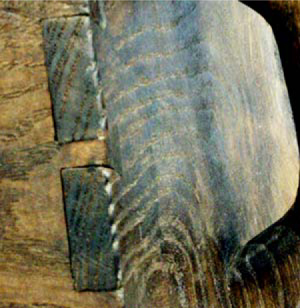 Fig. 16 Detail view of large hand-sawn dovetail joints on the piece in Fig. 15. These joints are still commonly used in rural workshops in India and Asia and are not a reliable test of age.

Fig. 17 Wall box recently assembled from old wood and painted in American folk art-style. The surface has been artificially aged to appear old. About 11-inches by 5-inches. 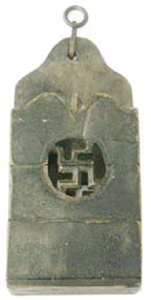 Fig. 18 Wall box recently assembled from old wood. The surface has been recently painted and artificially aged to appear old. About 10-inches by 6-inches. 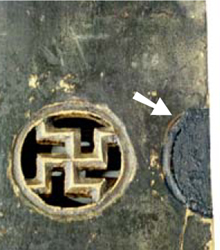 Fig. 19 This is the reverse of the wall box in Fig. 18. Note the semicircular plug at right. The entire box was created from pieces cut from a single decorative panel containing the four-armed symbol. On the back, one of the openwork symbols fell along an edge so it was filled in with a wood plug. The front of the box including the symbol is all a drab dark olive green. The reverse has its original paint; the symbol is in bright gold paint. 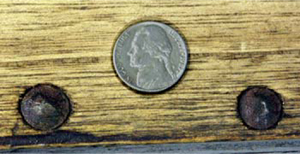 Fig. 21 Many of the pieces being "antiqued" are assembled with short nails having unusually large heads. The heads shown at left are typical. These heads can be three-eighths to one-half inch wide. 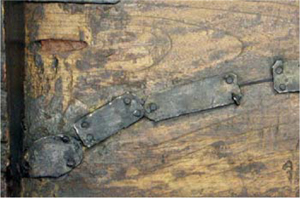 Fig. 22 Strips of metal are frequently used in "old repairs" on these pieces. Look closely and you'll find that the "repairs" are under the same finish recently applied to the entire object. 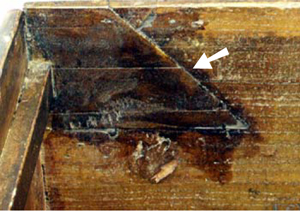 Fig. 23 Fairly large plugs of wood are also used for "repairs." In this example, several joined pieces of wood, probably from a piece of furniture, are used in the corner of a trunk.