Be alert for reproductions expressing patriotic themes. This 16″ by 26″ black and white print is a good example. The original image is a photograph documenting a 95- by 50-foot American flag produced by Amoskeag Mills of Manchester, New Hampshire in 1914.

Mill employees are shown standing in front of the flag and perched in open factory windows. Billed as the world's largest flag at the time, it was claimed that the flag never touched the ground during the entire manufacturing process.

This reproduction was made on a printing press. Examination with a 10X loupe reveals a series of black dots used in the modern halftone printing process. Reproductions of other patriotic prints from original photos have also been reported. Some of the copies are being made on home computers.

If you are unfamiliar with how to date printing techniques, consider using a black light. Long wave black light makes the great majority of all new paper fluoresce bright white. 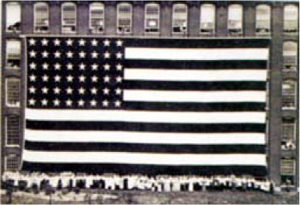 Printed reproduction of an original 1914 black and white photograph. Cotton mill employees and 95-by 50-foot flag.