Because many of the most valuable original rings are those on wheels, they are frequently targets for forgeries and reproductions. This article will discuss the guidelines to detect most fakes with wheels.

The new subject in this article, a dog pulling a ring, was purchased at a New York auction. Like most reproduction rings, it copies one of the more desirable and expensive originals. The original dog pulling ring is worth $350-$500.

Like many other reproductions, new napkin rings are best identified by comparing details of construction of both new and old. Once you become familiar with how old originals are made, it is fairly easy to detect the modern fakes and reproductions.

The first step is to examine the ring itself. The vast majority of original rings have die stamped or engine turned designs and patterns which are clear and sharp (Fig. 4). Reproduction rings are almost always cast in a mold which produces weak and poorly defined details (Fig. 3). Although some new rings have better detail than others, most new rings don't have near the detail found in originals.

Next, examine how the ring is finished. Because most new rings are cast, the vast majority have mold seams, pits, bumps and other flaws. Many of these flaws are obvious like the partial mold seam visible in Fig. 5, upper arrow. Attempts to remove the flaws also frequently show up as obvious grinding or file marks as seen in Fig. 5 lower arrow. Such marks are never found on original rings.

A power wire brush is commonly used to smooth the inside and outside surfaces of new rings. This tool leaves an easily identifiable pattern of parallel scratches of about equal depth and width that all run in the same direction (Fig. 6). These scratches should not be confused with normal wear which appears in random directions, widths and depths.

In addition to their direction, also consider the location of the scratches. The scratches in Fig. 6, for example, are not only parallel and run in the same direction but also appear in a totally illogical location. These scratches are on the very bottom of the ring directly above the wheel axle. How would normal wear ever reach into this protected area to produce these scratches? The answer is the scratches were put into the ring as it was made. It was then joined to the other new pieces to complete the final reproduction.

Also examine how figures pulling rings are joined to the ring. The vast majority of original figures are joined with very realistic harnesses. Remember, originals were used in the last quarter of the 19th century when dog, goat and horse carts were everyday sources of power. The average person had firsthand knowledge and experience with the parts of a harness and how it was made. Present day fakers and reproduction artists often forget this and make new harnesses that are unrealistic and illogical.

Almost all original harnesses on napkin rings, for example, include a realistic cinch rope or back pad (see Fig. 8) on the animal's body. This was an essential part of any real harness because it transferred the pulling power of the animal to the shafts. Shafts in turn were connected to the wagon, cart or load (or, in this case, a napkin ring). On napkin rings, cinch ropes are usually made of twisted wire; back pads are bars or straps.

The example in Fig. 8 shows a typical realistic harness; in this case fitted with a back pad. Note how the carefully formed shafts fit through holes on the ends of the back pad. Contrast the original harness to the reproduction in Fig. 7. Here the shafts, which are simply straight rods, are crudely soldered to the sides of the dog. There is no back pad or cinch rope to "hold" the dog to the shafts.

One final element to consider when evaluating the harness is the rein. Virtually every original ring with wheels had some kind of metal rein running from the ring to then pulling figure in front. The most common original reins are twisted wire resembling rope. Reins are rarely found in the fakes. Reins are commonly missing from many originals, however, including our original sample. Be sure to check for broken stubs behind the figures' necks and on the rings to confirm the one-time presence of original reins.

Don't rely on marks as a test of age. Many new rings have forged marks of original old manufacturers. Other than showing new tool marks and casting flaws, wheels are not by themselves an indicator of age. Most new wheels rotate freely as do the old. Keep in mind that some fakes are made up from genuinely old parts and may be difficult to detect. Compare details to originals shown in reference books.

Thanks to Evelyn Teichman for loaning the reproduction napkin ring for photography. Teichman is an appraiser and antiques educator in New Jersey. 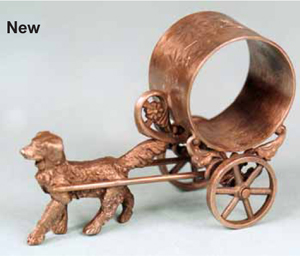 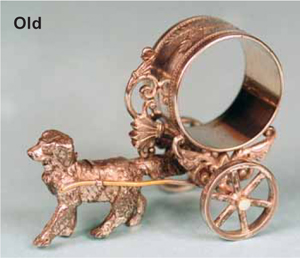 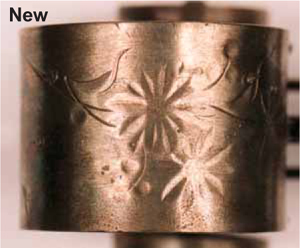 Fig. 3 New napkin ring pulled by dog shows typical lack of detail. This ring and the vast majority of other new rings are cast in a mold and have little detail. 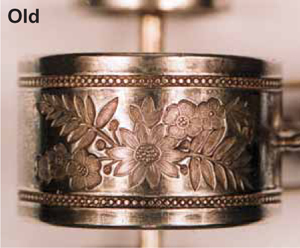 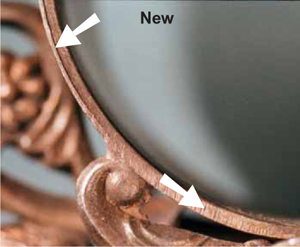 Fig. 5 File marks and grinding marks (lower arrow) are common on this and most other reproduction rings. This closeup is of the very edge of the napkin ring. Since the new rings are cast, also be alert for mold seams (top arrow) on the rings. 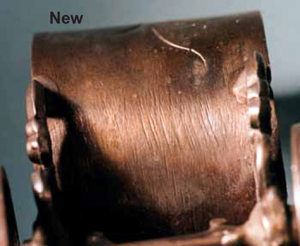 Fig. 6 Scratches on outside bottom of new napkin ring. The inside as well as outside of the new ring has been smoothed with a wire brush which has left these obvious marks. Note these marks are parallel and point in the same direction. 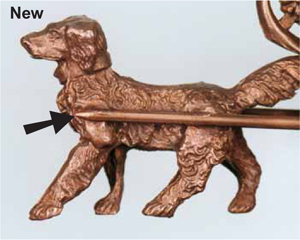 Fig. 7 There is no back pad (or cinch strap) connecting the harness shafts to the animal's body on this and most other reproductions with harnesses. These new harness shafts are simply metal rods with the tips filed into sharp points (arrow). 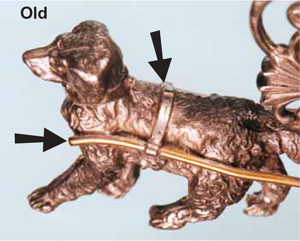 Fig. 8 Virtually all original harnesses have a realistic back pad or cinch rope (top arrow) holding the shafts to the animal's body. The harness shafts are also realistic. Note the curved shape used here as opposed to the straight rods in the fake in Fig. 7. 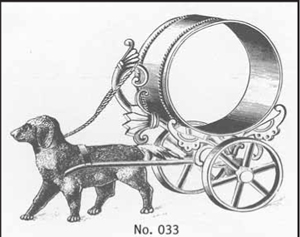