What's the difference between Henry Bonnard and Henry-Bonnard?
About 100 years

It is important to separate the original Henry-Bonnard Bronze Co. from a 1990s business of a similar name – Henry Bonnard Bronze, Inc. – run by convicted art racketeer, Darrell Tyrone Coker.

Edouard Henri and Pierre Bonnard began a bronze works in New York in 1872. The business was incorporated as The Henry-Bonnard Bronze Co. in 1884. Henry-Bonnard specialized in sand cast bronzes and was selected by Remington to make his all his first bronzes produced from 1895-1900. The original Henry-Bonnard foundry name is one of the clues used to help authenticate an original sand cast Remington bronze.

Coker began an auction business in Florida in 1989. Through his businesses, Jewelry Auction, Inc. and Henry Bonnard Bronze, Inc. in Longwood, FL, Coker obtained reproductions of bronzes from various manufacturers. Coker than sold the bronzes at greatly inflated prices by representing them as originals in auctions he held throughout Florida.

Coker was indicted and arrested in June, 1997. His jury trial was held January 18-28 in Leon County Circuit Court in Tallahassee. Coker was convicted of one count of racketeering and pleaded no contest to one count of sales tax violations. On Feb. 4, 2000, Coker was sentenced to five years in prison, ordered to make restitution of $162,000 and pay investigative and prosecution costs of $78,000.

Tammy Wade of the Florida Office of Statewide Prosecution told ACRN that 15 different victims of the phony bronze schemed testified at Coker's trial.

"By combining the transactions, our office was able to prosecute on a charge of racketeering which carries a more serious penalty than multiple counts of simple fraud," said Wade. "Although Coker dealt in other art, the new bronzes were the focus of the evidence."

Future buyers, unaware of Coker's criminal activities, may believe his ca. 1990s appraisals and certificates with the name Henry Bonnard Bronze Inc. in the provenance (record of ownership) to be authentic. This could lead to mistaking the Coker's new bronzes for originals by the foundry of Henry-Bonnard, New York.

No one is sure exactly how many of Coker's false appraisals and certificates of authenticity are in the market. Florida agents estimated sales revenue of Coker's schemes in the millions of dollars. To date, however, only 150 victims have come forward or been otherwise identified.

When ACRN dialed the 800 phone number listed on a 1990s Henry Bonnard Bronze, Inc. catalog, it was answered as the Bronze Shop in 2000. A catalog requested at the time by ACRN from the Bronze Shop listed an address in Egg Harbor, New Jersey. 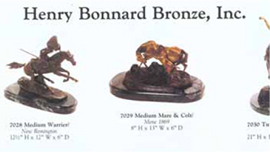