A well known Weller Pottery Coppertone shape has been copied. The new vase in Fig. 1 with figural frogs and lily pads was originally purchased at a retail store for $16.99. It was obviously copied from the original ca. 1920-30s Coppertone vase in Fig. 2. Originals have sold for $500 to $1000+ depending on glaze, marks and artist signatures.

"Coppertone" refers to the glaze, not the subject or shape. It has a dark brown or bronze background randomly breaking through a matte green top glaze. Weller made the original Coppertone line in the late 1920s through about the mid-1930s.

Coppertone was applied to shapes from several standard Weller lines including Warwick, Silvertone and Pumilla. It was also used on pieces featuring themes from nature such as frogs, fishes and water plants. The naturalistic pieces are the most sought after and bring the highest prices.

Differences between old and new

The main differences between new and old are the size and glaze. Like most reproductions made of ceramics or pottery, new pieces are smaller than the originals. In this case, the authentic Coppertone vase is 8″ tall, 9″ wide; the copy is 6½″ tall X 8″ wide.

New pieces are quite heavy. The new sample weighed over three pounds. 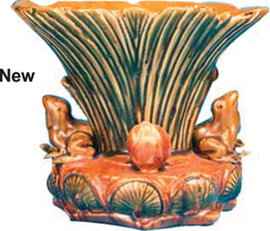 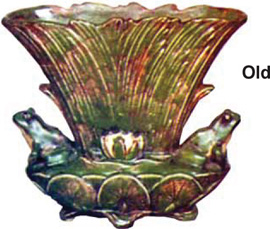 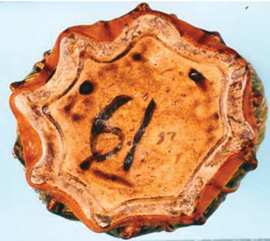 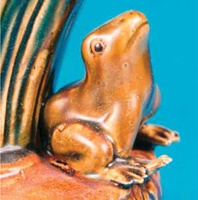 Fig. 7 Close up of figural frog on new vase. Fairly well molded but not as lifelike as original frogs.

Rare Weller Louella Basket
Why? Why Not
$75
Weller Pottery Hudson Vase
Paths Before You
$198 Sale Price 50% Off