Most collectibles have some means of identification–factory mark, catalog shape, reference books, specific finishes or color. Van Briggle Pottery, however, often requires a close examination of more than just one characteristic.

That's because a number of shapes, marks and colors produced in vintage Van Briggle Pottery are still being produced today. The current Van Briggle mark, for example, is virtually the same as those used since 1920. Unless you have a pre-1920 piece, which was usually dated, you really can't be too sure if your piece was made in 1920, 1960 or 2000.

Therefore, before you can date a piece, you must consider which colors and glazes appeared on which shapes throughout the years. It's obviously beyond the scope of this article to show all the differences in all the shapes so we'll look at five shapes that illustrate the problems in dating Van Briggle.

Van Briggle pottery has been made continuously since 1901 in Colorado Springs, Colorado. It was founded by Artus Van Briggle. Before moving to Colorado for health reasons in 1899, Van Briggle was a major decorator for Rookwood Pottery in Ohio. The Van Briggle Pottery Company built its success on soft dull (matte) glazes.

The Swirl Leaf Bowl can be seen in the 1950s brochure listed as Design 150 and called "Blooming Tulip," priced at $6.95 each. The height was given at 5 1/2″ and width at 6″. All pieces were available in choice of Turquoise, Persian Rose, or Moonglo (white). The swirl leaf bowl is not seen in the 1977 catalog but has been produced since then.

The Columbine Vase appears on an advertising brochure from the 1940s. No price is given. Also, no mention was made of the glazes available. However, the vase does appear in the 1977 catalog, listed as No. 505, "The Columbine Vase, height 7½" and available in Turquoise Ming or Moonglo, priced at $8.50 each. Let me add that although the catalog does not state that the item was available in Persian Rose, I was able to purchase these items in Persian Rose in 2000 just by asking. If you look on the current web site or in the current catalog, you may not find Persian Rose available as a glaze. However, the glaze might available. When asking for Persian Rose in 2000, I was charged a 20% premium above the regular cost of $65.00 each.

The Butterfly Bowl is pictured in the 1907 catalog and is listed as 684 at 3″ high. To quote from the catalog, "The color range is wide and very suggestive of Colorado, reflecting with equal fidelity to nature the brilliant turquoise of the sky, and the reds, grays, browns, yellows, blues and purples which exist in striking effect in the crags and canyon walls, and in the more subtle tones of the incomparable dawn and twilight of the plains." This shape is also listed in Scott Nelson's book as Design # 684 produced from 1900 to 1912. It is not pictured in the 1950 brochure but does appear in the 1977 catalog that was mailed to this author. It was called the No. 684 Butterfly Bowl, available in Turquoise Ming (not Ming Turquoise as is the current use) or Moonglo which was white.

A variety of marks are found on the new Van Briggle made today. A sample of six typical marks are shown below. All marks are hand incised in the wet clay with a stylus. A seventh with ink stamped markings is shown on this page in Fig. 9. Unfortunately, with the exception of the ink stamp, none of the new marks give a clear indication of their recent age. Many new marks could easily be confused with very similar marks found on vintage pieces. 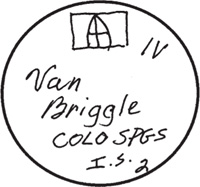 Mark 1: Typical blocked double A that is found on all pieces. This particular logo has a Roman Number IV, initials I. S. and a "2." These have been attributed to finisher's marks. Notice that Van Briggle, itself, is in a script with an upper case "V" and "B;" however, the remaining letters of Van Briggle are in lower case. Also, "Van" is one line while "Briggle" is on the other. "COLO SPGS" are capitalized with end punctuation. 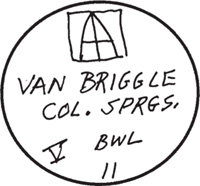 Mark 2: Typical blocked double A. This logo has the Roman Numeral V and either "11" or the Roman Numeral II. Also, VAN BRIGGLE is all capitalized, and COL. SPRGS. are also in caps with end punctuation. Note that an addition "R" is added to SPRGS than is found in Mark 1. 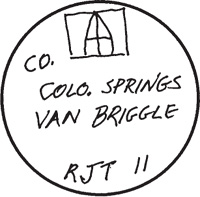 Mark 3: Typical blocked double A. CO. is placed in the upper left. It either stands for Colorado or someone's initials. COLO. SPRINGS is still different from the other marks shown. After COLO., there is a period, and the entire word is spelled out for SPRINGS. VAN BRIGGLE is all in caps, RJT has signed his/her initials, and the number 11 or the Roman Number II is placed at the bottom right. 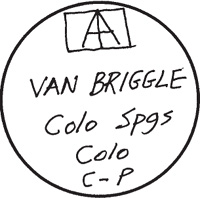 Mark 4: Typical blocked double A. VAN BRIGGLE all in caps. COLO SPGS is abbreviated without end punctuation. COLO is again placed beneath the city and has no end punctuation. A "C-P" is at the bottom. 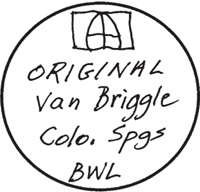 Mark 5: This mark appears on the vase in Fig. 10. This piece was thrown after the potter had completed his day's work and is an "original". The word ORIGINAL is below the blocked double A. Note that there is a period after "Colo." but not after Spgs. The initials BWL are centered at the bottom. 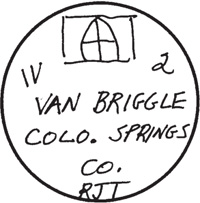 Mark 6: Typical blocked double A. A Roman Number IV is on the left, and the number 2 is on the right. VAN BRIGGLE capitalized on the same line followed by COLO. SPRINGS with a period following COLO. Again, after the city, one finds CO. with a period. Initials RJT at bottom.

All three books offer excellent information. Nelson has given the collector a detailed accounting of logos that have been used from early Van Briggle to current production. He also has included the "Catalogue of Van Briggle Designs" which presents 766 authenticated Van Briggle designs from the period 1900 to 1912. Sasicki and Fania have attempted to give a detailed chronological listing of Van Briggle products, with color photos and descriptions. Lastly, Carl and Jim Carlton have included an invaluable two pages from a 1950s Van Briggle catalog or brochure which gives us definite proof that some items produced in the 1950s are currently being produced. A 1977 company catalog also highlights several items produced again today.

Ron Lindsey is a long time Van Briggle collector and dealer in antiques from Pasadena, Texas.

New Van Briggle Pottery continues to be made in the same shapes first developed almost 100 years ago. Marks and glazes on new pieces are also virtually identical to vintage pieces. The marks and pieces shown here are all from production in the year 2000. 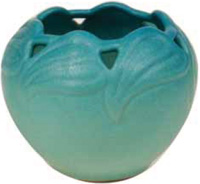 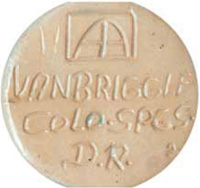 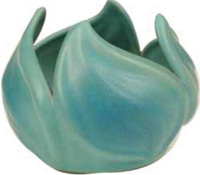 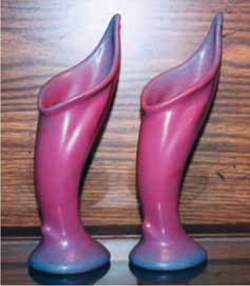 History of the Butterfly bowl 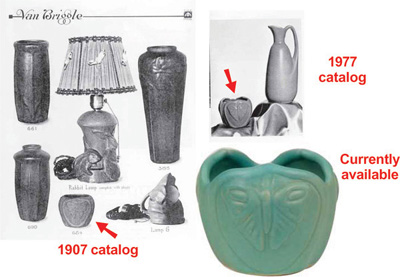 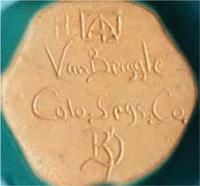 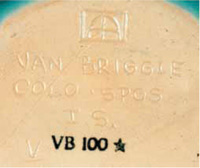 Fig. 9 There is no question about the age of this mark. The ink stamped VB 100 definitely never appeared on a vintage piece. 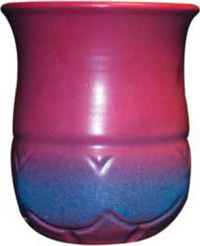 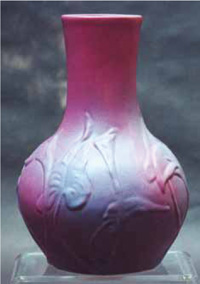 Van Briggle Pottery is no longer in operation.