Perhaps no other pattern in pressed glass is surrounded with the confusion, fanciful legends and misinformation as U.S. Coin. This article will help sort sober facts from the wild fiction by describing the origins of genuine U. S. Coin pattern glass and how to tell the difference between old and new.

One of the inspirations for the U.S. Coin pattern, as the story goes, was a barroom floor. A salesman who travelled the American West for the Central Glass Company of Wheeling, West Virginia supposedly saw coins used to decorate the floor of a barroom and thought coins would look good on glassware too. Back at the Wheeling plant, the idea was approved and work began.

Contrary to one popular opinion, actual coins were not impressed or cast to create the molds. Rather the general appearance of coins then in circulation was used as a basis for the overall pattern design. A number of details on actual coins were deliberately left out of the final pattern because of a lack of space, awkward appearance or other design and production considerations. The original name given to the final pattern was "Silver Age."

Opinions still differ on why most of the coins in the pattern are dated 1892 when actual production began in 1891. Was the pattern to commemorate the Columbian Exhibition at the Chicago World's Fair of 1892? Or was it to celebrate the 100th anniversary of the U.S. Mint? No company records exist to tell us which is correct.

If the coins were intended to honor the U.S. Mint, the U.S. Treasury Department wasn't impressed. After just 3-5 months of production (the actual time is not known) the Treasury department ruled the glass pattern was a form of counterfeiting and thus illegal. Central Glass Company was ordered to destroy the molds and any unsold inventory.

Central Glass argued that it would be impossible to pass the "coins" as money since the coins could not be separated from the glass pieces they decorated. It was also pointed out that the design was on one side only and unlike double sided real coins. All to no avail; the Treasury order stood.

Whether the Treasury order was based on strict interpretation of the law or simply harassment of a political opponent is open to debate. The president of Central Glass in 1891 was Nathan B. Scott, a highly visible and prominent Republican. Scott served on the Republican National Committee in 1888 and later served West Virginia as U.S. senator. In a somewhat ironic twist of the counterfeiting charge, President William McKinley appointed Scott head of the Internal Revenue Service in 1898.

Central Glass tried to make the best of a bad situation by modifying the U.S. Coins to tie in with the Columbian Exhibition. American coins were replaced with coins bearing the portraits of explorers Christopher Columbus and Americus Vespucius and coats of arms of the United States and Spain. This pattern was named Columbian Coin and is thought to have been produced for only about one year.

U.S. Coin and Columbian Coin are very scarce because of their very limited production. The pattern is sought by both numismatists (coin collectors) and pattern glass collectors. U.S. Coin pattern glass appears only in clear glass. The coins may be frosted or stained with ruby or amber flashing. Columbian Coin appears in clear glass with some shapes also made in milk glass.

The first reproductions began to appear in the mid-1960s with an American made toothpick. This was followed in 1967 by a series of Japanese made reproductions which eventually included a toothpick, sugar, creamer, bread tray, spooner, candlestick, covered nappy, covered compote, tumbler and paperweight (Figs. 1-3). We will look at each reproduction and compare them to the originals.

Several reproductions are pieces never made originally. These include two paperweights, a 3-legged spooner and a candlestick. The new paperweights (Fig. 11) feature either the reverse or obverse of a silver dollar and measure 2 1/2" across. The new candlestick (Fig. 14) is 4 1/2" tall; it also forms the base of the new covered compote. The 3-legged reproduction spooner (Fig. 13) is quite different than the original (Fig. 12). The old spooner is a straight sided cylinder with a flat base and features six coins. The reproduction has legs and a flared out top rim with four coins.

The toothpick holder is the most difficult piece to identify because of all the reproductions. Originals are decorated with 4 silver dollars and have two small stars on the reverse (Fig. 4). One star is located under the letter "U" in "United" on the left; the other is located under the "A" in "America" on the right. Neither of the two reproduction toothpicks have these stars. The "One Dollar" below the eagle and the date on the obverse side on originals are very faint and barely visible.

Reproductions are also decorated with four silver dollars but there are mold details that separate them from originals. The first reproduction toothpicks have seven stars under the eagle on the reverse (Fig. 5). The later reproduction toothpick has extremely sharp detail with a crisp date on the obverse and a well defined "One Dollar" under the eagle (Fig. 6). The grooved milling around the coin's edge is also precisely molded (Fig. 6).

The original bread tray is 7" X 10" the reproduction, 8" X 10" (Figs. 7-10). In the center row of coins in the original, all the heads face the long dimension of the tray. The heads are turned 90 degrees in the new tray and face the short dimension. Another difference in the center row of coins is the number of eagles or reverse sides. There are three in the old tray and only two in the new.

The new candlestick is used with the new covered nappy to make the covered compote (catalog reprint, Fig. 3). The compote and nappy can be identified by looking at the eagle on the coins. In the reproductions there is a banner over the eagle's head; the originals do not have a banner (Figs. 16-17). Also the base, or standard, of the original compote is hollow; the base of the reproduction is solid (Fig. 15, arrow). The new compote is 9 1/2" H. x 6" dia.; the new nappy is 5" H. x 6" dia.

The reproduction sugar and creamer, shown as they appeared in a catalog in Fig. 20, can also be identified by inspecting the eagle. New sugars and creamers have a banner above the eagle's head; the originals do not have a banner. Old and new creamers are also different in shape. The old is narrower and taller measuring 5 1/8" H. x 3" dia; the new creamer is 4" in diameter (Figs. 18- 20). Be careful not to mistake the bottom of an original sugar for an original spooner. The sugar bottom is four inches in diameter, the spooner is three inches in diameter.

The only original U. S. Coin pattern tumbler has a band of six dimes around the base, (Fig. 22). So far there has not been a reproduction of the original U.S. Coin tumbler but there are several confusing look-alikes: three date from the 1890s and are old, one is newer from the 1970s (Fig. 21). Original style A & B tumblers are from about the same time period as the original U. S. Coin pattern and were probably made by one of the other 18 factories of United States Glass. The common clue to the look-alikes and reproduction is the single large coin in the bottom of the tumbler. Original tumblers have coins around the side only.

You can separate old look-alike tumblers from the reproductions by the dates on the coins. The old style (A) tumbler with panelled sides is dated 1878. The coin in the reproduction with panelled sides is dated 1892. There are two versions of old style (B) tumblers with smooth sides: one has a coin dated 1879, the other a coin dated 1882.

Generally, one of the ways to spot reproductions of old pattern glass is to find mistakes resulting from a poorly made new mold. However, several original pieces of the U.S. Coin pattern have very obvious errors in their molds. Don't confuse mistakes in original pieces as a sign of a reproduction.

One of the errors is in the tray of the water set. The eagle in the center of some trays faces a different direction (see arrows, Fig. 25) than the eagles in the outer ring of coins. This was apparently corrected as some old trays do have the center eagle facing left.

Remember: Use the information on reproductions for only the specific piece being discussed. Do not make generalizations about details given for one piece. 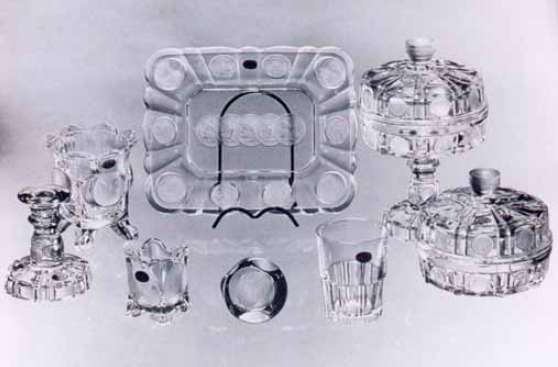 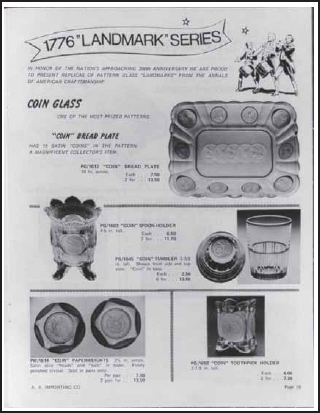 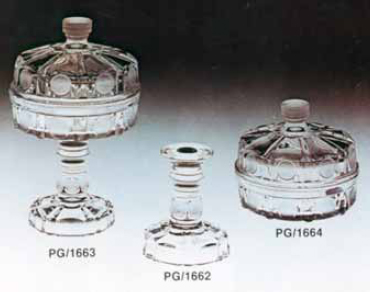 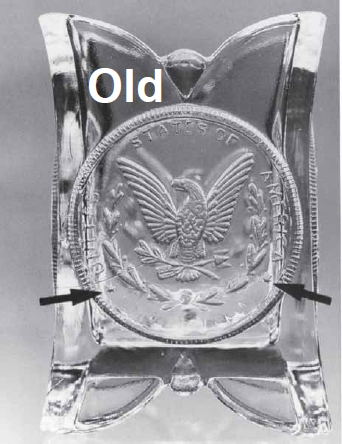 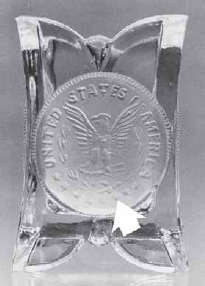 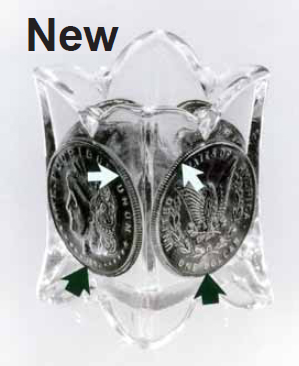 Figs. 4-6 All old toothpicks have two stars on the reverse side as shown in Fig. 4 above at the two arrows. The date and "One Dollar" are very faint and hard to see. The first toothpick reproduction, Fig. 5, has seven stars on the reverse. The later reproduction in Fig. 6 has a sharply molded date and "One Dollar" (black arrows) and crisp outline detail (white arrows). Most coins on reproduction toothpicks are frosted coins but the one in Fig. 6 shows a variation with silver colored coins. No old pieces ever had silver colored coins. 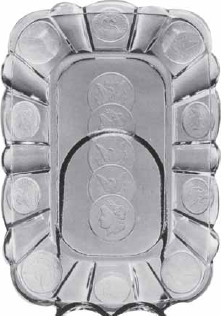 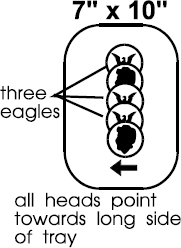 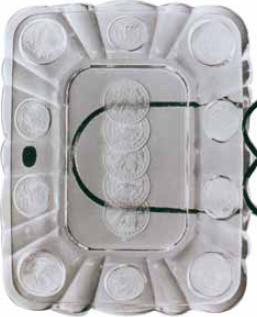 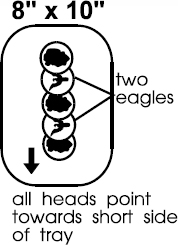 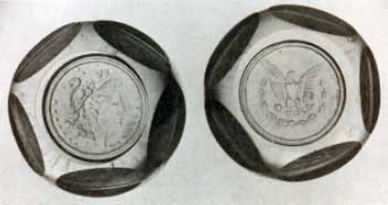 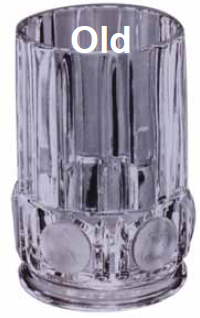 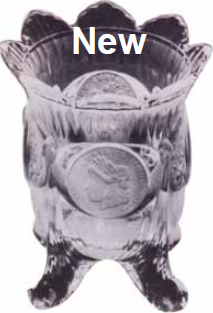 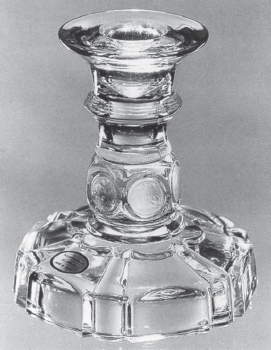 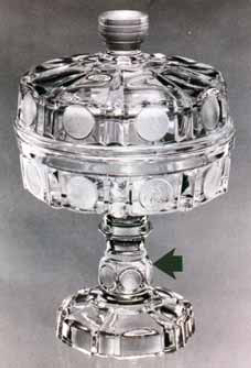 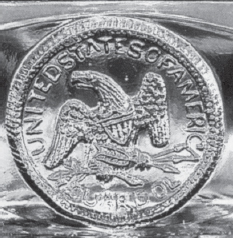 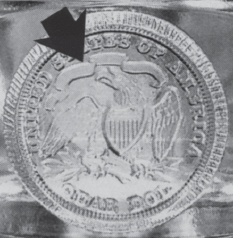 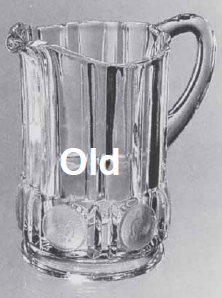 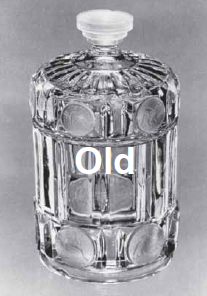 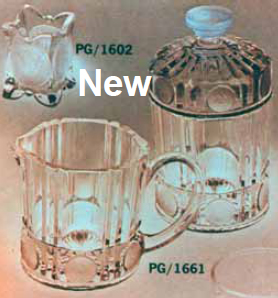 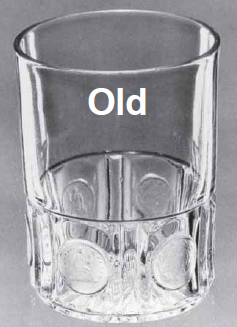 Fig. 22 The only tumbler made in the original U. S. Coin pattern has coins on the sides not the bottom.

Fig. 23-24 Close up of reproduction Style A panelled side tumbler; coin in base dated 1892. 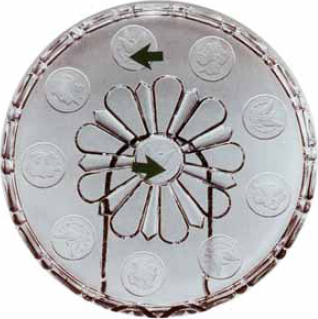 Fig. 25 On some original water set trays the eagles may face different directions. 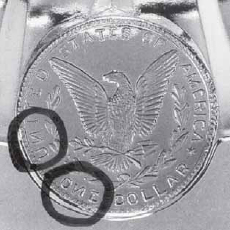 Fig. 26 Close up of the reverse letter "N" that appears in some original molds. It can be found in some water set trays and on the handles of the butter dish base.