Three legged, or tripod legged, tables have been one of the most popular shapes of antique furniture for years. They are relatively small and can be used in apartments as well as homes. Their size makes them easy to carry home in trunks and back seats of almost any kind of car and that means they can be sold as "impulse" items to tourists, casual shoppers and other non-collectors. This demand has made three legged tables one of the most heavily reproduced types of antique furniture.

Most of the reproduction wood furniture showing up in auctions, shops and markets is imported from Southeast Asia, primarily from the Philippines and Indonesia. Most of these pieces are entirely hand made from solid mahogany. The new furniture is available in a wide range of period antiques from 18th to early 20th century, in American, English and French designs. One Indonesian reproduction firm advertised that it had 1500 different stock items; an American importer has claimed to have 5000 pieces always available in a Southeastern United States warehouse.

Knowing how old original tables were generally made will help you quickly sort out the crudest and most obvious fakes. For example, on most old tables the block on top of the column is joined to the column with a true mortise and tenon (below, arrow at A). Note that all edges are square and flat. Even if this joint is not glued, the table top cannot turn because the shape of the joint itself. This type of joint is the most practical for a table meant for daily use as was the purpose of old original tables which were made as furniture. Tables made as reproductions can get by with a weaker joint between the block and column because they are not made to be used daily but more to "look at". Many recently made tables commonly use what is called a round (or sometimes peg) mortise and tenon joint because it is quicker and cheaper to make than the regular mortise and tenon (below, A-1).

The blocks of earlier tables are also usually made of a secondary, or less expensive, wood. If the primary wood was mahogany, for example, many American furniture makers used maple for the block. Keep in mind that makers of old original furniture were concerned about making a profit. Why use an expensive wood on a structural piece that would never be seen? More modern pieces, on the other hand, are usually made entirely of one species of wood such as Philippine mahogany.

The oldest columns are made of a single piece of wood; more recent tables are made of several pieces joined together(below, B). You should be able to trace the wood grain in a continuous unbroken pattern. If the column is carved, inspect the width of the carving. Since carving adds considerably to the value, a genuinely old but plain column will sometimes have carving added later. Original carvings began with the wood turner leaving an oversize area to be finished by the carver. This results in a finish carving larger in diameter than the column (below, D 1-3). When carving is added to a plain column, the carving usually ends up being less than the original diameter.

Continue your examination of the base by looking to see how the legs are joined to the column. The oldest tables generally have a metal plate, usually brass, to help support the legs (below, C). Newer tables may or may not have a metal plate supporting the legs.

On genuinely old pieces, you should also find a wear "shadow" on the bottom of the column that matches the outline of the metal plate. If the original wood has been covered by the plate for years, the wood underneath the plate should be lighter in color. 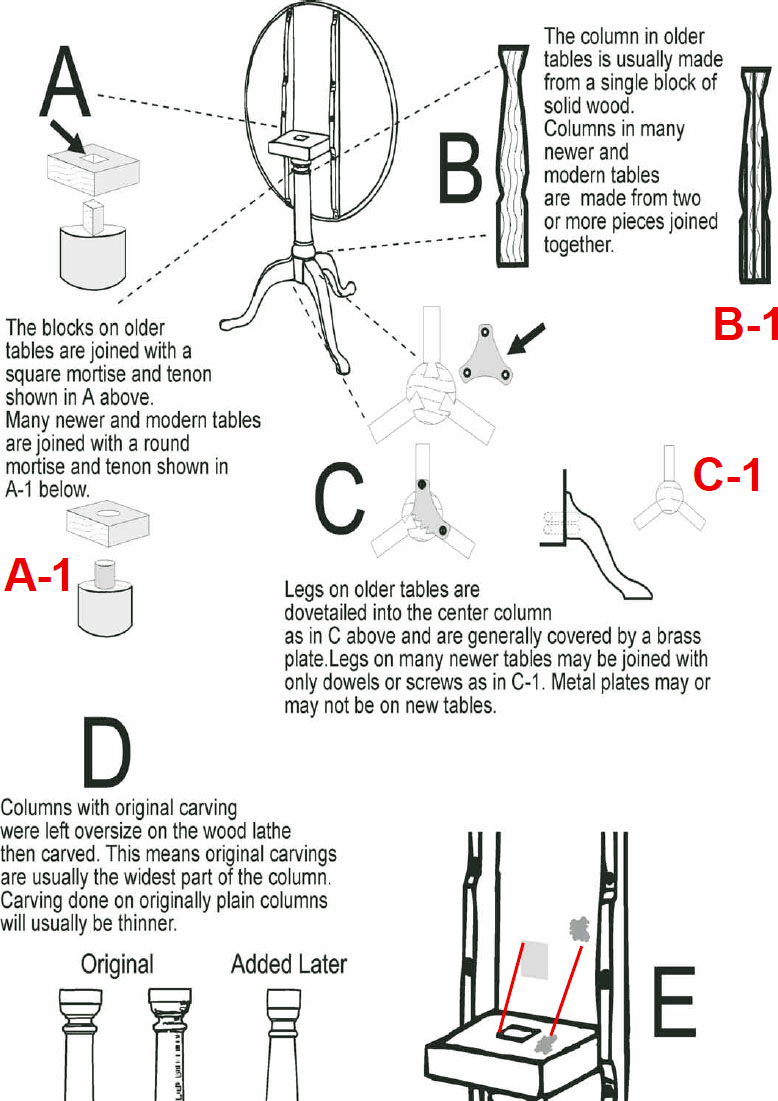 Fine old original table tops with pie crust edges were carved from a single thick and very wide piece of wood (below, A-C). It's hard to believe now, but trees in 18th and early 19th century forests produced single boards up to 30 to 36 inches. The pie crust edge on many newer tables is only an applied molding. Moldings can be identified in several ways.

First, there is a horizontal seam between the molding and the tabletop proper (below, A-left). There is also a seam where the molding is cut and pieced around the curve of the table top (below, B-left).

Another clue to the age of a table is in how the pie crust edge is shaped (below, C). Generally, old carved edges have curves that meet in relatively sharp points. The sharp points were possible because the carving was generally done by hand with a chisel or other narrow cutting tool. Some times old but plain table tops will be "improved" with new carving. In most case the new carving is done with a rotary power tool such as a router. Carvings done with rotary power tools generally leave smoother, more rounded curves in the pie crust edge. (Note: applied molding can be arranged to produce sharp points so be sure to look for the seams where the molding is joined to the table top and to other piece of molding.)

Another general test is to compare the diameter of the table top to the widest part of the base. Tops of older tables are almost always wider than the base (below, D). Newer tilt-top tables frequently have tops that are smaller than the base especially those tables made in Southeast Asia.

Also look for the same general clues to age you would look for in any other piece of furniture. If a table is represented as being 100+ years old, check the grain for shrinkage. Wood shrinks more across the grain than with the grain. This means that shapes which were originally round, or square, like table tops and legs will now be slightly out-of-round. It is not unusual for an old 28-40" dia. round table top to measure up to 1/2" less across the grain than with the grain. The same is true for round turned legs. The differences in legs and other turnings will be slighter because of the smaller over-all dimensions but can still easily be detected with a pair of calipers (Fig. 4 below). 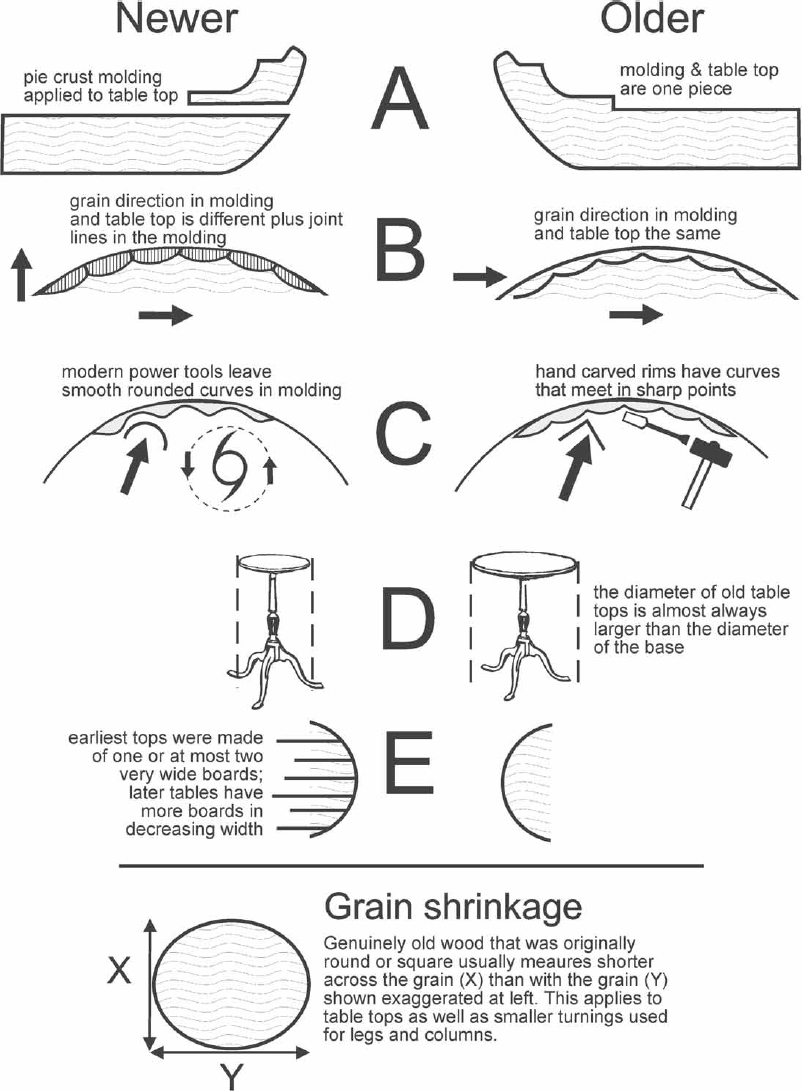 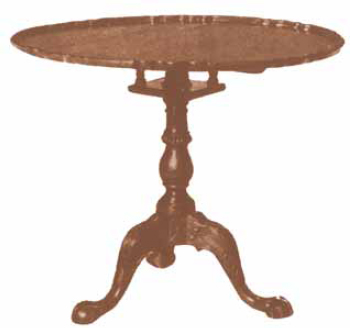 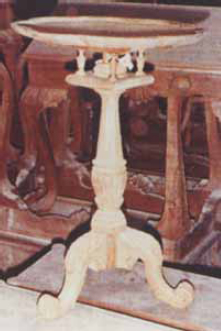 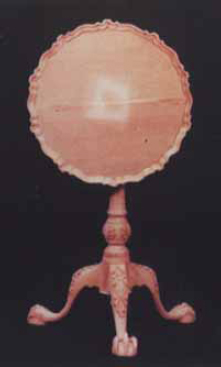 Figs. 1-3 The table in Fig. 1 is a very high quality reproduction made in 1936. It is shown in the catalog of a firm called Virginia Craftsmen, Inc. and priced at $240. The top is formed of a single block of mahogany but has an applied pie crust molding. The tables in Figs. 2 and 3 are newer items, made in Indonesia of Philippine mahogany (Shorea, species). Note that the diameters of the tops in Figs. 2 & 3 are smaller than the width of the bases. Tops and bases frequently seem out of proportion on the new tables because different sized tops are used interchangeably on the same size base. 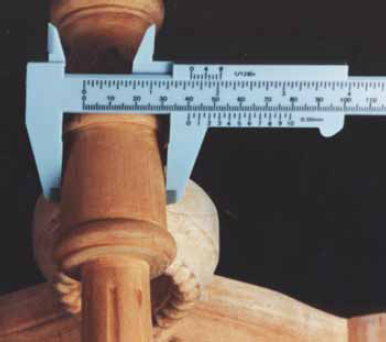 Fig. 4 Over time, the round turnings will shrink across the width of the grain. This leaves turnings which were perfectly round or square when they were originally made, slightly oblong or oval. You can check for shrinkage by measuring across the grain, then taking a second measurement with the grain.