While browsing around antique shows. I have seen a few tea sets in the Japanesque taste that, from a distance, appeared to be in the style of Tiffany silver. On closer examination, they turned out to be recently made sets manufactured in the electroforming process. Those sets were not stamped with the Tiffany & Co. silver marks. A few months ago, Beverly Bremer from Atlanta contacted me about a water set (Fig. 1) she had purchased, stamped with recognizable Tiffany marks, about whose authenticity she was having serious doubts.

According to Bremer, a man by the name of F.A. Banich entered her shop offering her the illustrated water set which, he claimed, he had inherited from his aunt. It was packed in a Tiffany & Co. leather suitcase with the initials "BBB" on the outside. Since the case bore the same initials as the seller's last name, she did not question its provenance. As with all new clients, she asked for his driver's license and telephone number (which turned out to be incorrect) and had him sign her customary form asserting that "this merchandise belongs to me free and clear of any liens." At the time, she thought his price of $9,500 was a fair amount to pay for such a set. A few days later upon further examination, she began to have doubts about the construction of the set and asked me to help her verify whether it was, in fact, by Tiffany.

I examined the water set thoroughly and determined that it was definitely not a Tiffany & Co. product. Some of the telltale signs: When I picked up the pitcher, it felt excessively heavy and did not seem appropriately balanced for pouring; the decoration was raised from the surface as if it had been repousse' chased(Fig. 2), not applied like Tiffany's Japanesque silverware from the l870's and decorative motifs were not finished with the same meticulous attention to detail that is characteristic of all Tiffany silverware.

When I examined the tray (Fig. 5), I could tell that it had not been hand hammered to achieve a flat surface. When I held it between my fingers, the bottom flexed appreciably and made a popping sound. With help of an expert in this matter, I was able to ascertain that the pieces had been made by electroforming (a 10X loupe will reveal small pores in the metal, a clear signature of that process).

The stamps on the underside of each piece of the water set (Fig. 6) are similar to commonly used Tiffany marks. However, in this case the pattern and order numbers are missing. With the exception of a few presentations pieces from the turn of the century that are stamped without these numbers, Tiffany almost always included pattern and order numbers along with the firm's name and metal content as part of their mark (see examples pg 28). Another key discrepancy is the letter "M" stamped just below the metal content. The script type is not appropriate for Tiffany Japanesque silver; it should be a block type characteristic of the time period when Edward C. Moore ran the silver shop. The "M" on this set is similar to the mark used from 1907 to 1947 while his son, John C Moore, was president of Tiffany (see date letter chart pg. 26).

In order to make this set, the pirate silversmith had to have a model from which to make it. It was by serendipity that I found what may have been the original set. While visiting a collector in a related field, I noticed in his cabinet a four-piece water set very similar in style to the illustrated set. Other than a red copper patination finish, it exactly resembled the illustrated set, with the same decoration on the pitcher, including an applied lizard on the lid; a triangular tray with a leaf, spider, and dragonfly; and drinking cups with insects, fish, and plants. This set was stamped with marks for the Russian maker Pavel Ovchinnikov and dated to the 1880's. Charles Venable in Silver in America 1840-1940; A Century of Splendor illustrates a similar triangular tray on page 184, and in the text on page 189 explains, "The Moscow workshop of Pavel Ovchinnikov copied a significant number of Tiffany & Co. models with appliques and textured of patinated surfaces." It struck me as ironic that someone was making fake Tiffany by copying Ovchinnikov who originally copied Tiffany. For the honest dealer and collector, it clearly amounts to double trouble. 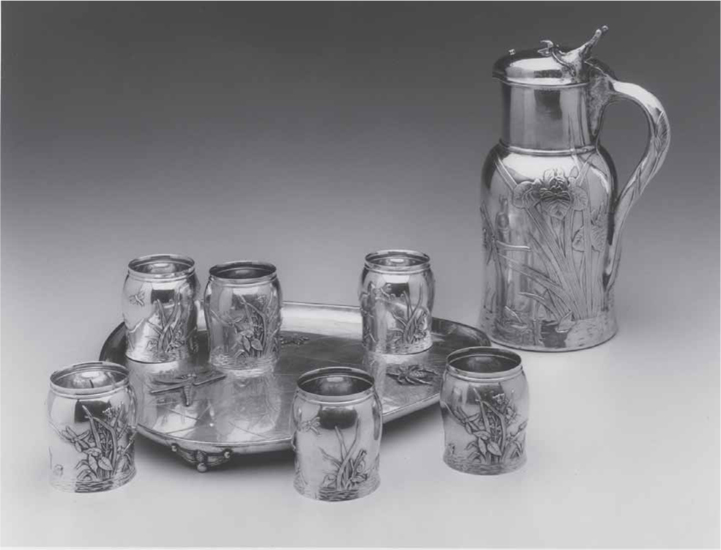 Fig 1. This silver water set with Tiffany & Co. hallmarks sold at $9,500 before it was recognized to be a fake. 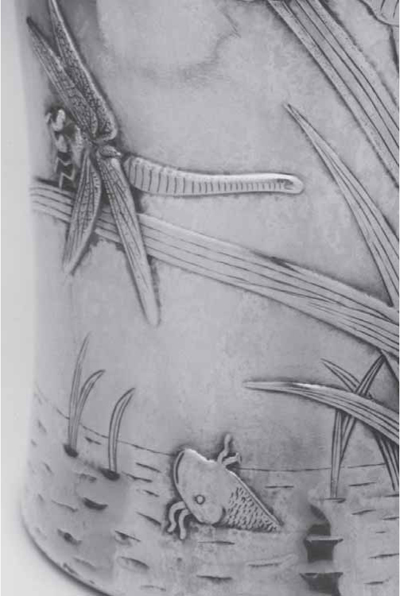 Fig 2. Close up of new water pitcher. Decoration is raised or repousse. Decoration on Tiffany Japanesque originals is made separately and applied, applique. (See Fig. 3 top of page.)

Fig 3. Repousse is a type of chasing in which the silversmith uses tools on the back side of a surface to raise the decoration in front. In applique, decorations are made separately and applied. 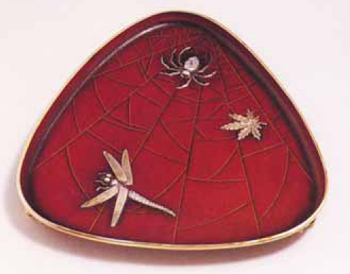 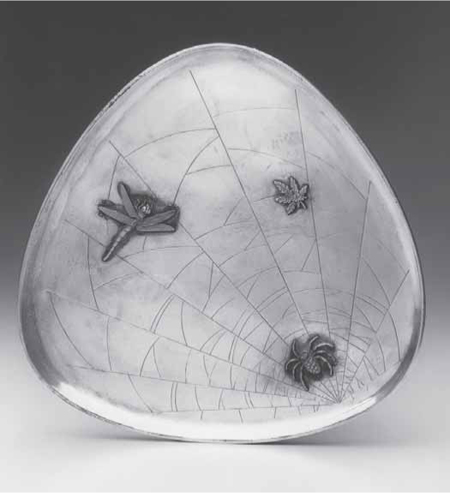 Fig 5. Tray from water set on front cover with faked Tiffany & Co. hallmarks. In the Japanese style, a look Tiffany introduced to Europe at the Paris Worlds Fair of 1878.

Fig 6. Close up of forged mark. The style of the date letter is incorrect for the time period in which original Japanese-style Tiffany silver was made. Order and pattern numbers are missing.

Generally, all Tiffany silver marks include pattern numbers and order numbers. Pattern numbers were taken from the original drawing of a piece or set of pieces (pattern numbers do not refer to decoration). Order numbers identified a specific order for one or more pieces.

Pattern numbers generally are on the upper part or left side of the mark. Order numbers are usually on the right side or lower part of the mark. The examples below illustrate the positions of pattern and order numbers with X's. 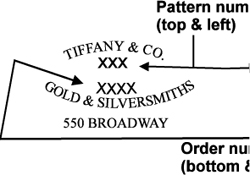 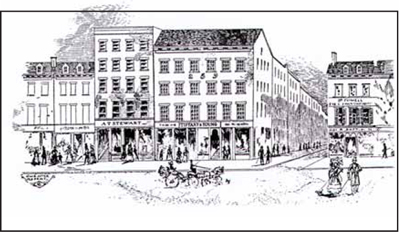 Tiffany & Co. was founded by Charles L. Tiffany (b.1812-d.1902). Tiffany was born and raised in Connecticut where his father owned a cotton mill and small general store. As a young man, Tiffany went on buying trips to New York city for his father and became interested in opening a store of his own there. Tiffany, and his friend John Young, opened his first New York store in 1837. The store grew and silver was added to the inventory around 1847. Around 1851, Tiffany & Co. became the first American firm to adopt the so called English Standard of 925/1000 for silver quality. (U.S. standard at the time was only 900/1000).

In 1868, Tiffany purchased the silver works of John & Edward Moore. About the same time, Tiffany hired away Thomas Shaw of Gorham to do silverplating. With their own source of silver as well as silverplate, Tiffany & Co. was to become one of the major retailers of silver products in America.

Charles L. Tiffany was the father of Louis Comfort Tiffany (b.1848-d.1933) who became famous in his own right. L.C. Tiffany was one of America's leading Art Nouveau designers of lamps, glass tiles and decorative glassware. Tiffany & Co., founded by Charles, continues today as a leading retailer of fine jewelry and silver. The firms started by L.C. Tiffany ceased at his death in 1933. Trademarks and trade names are entirely different for the companies founded by each.

The address was included in a number of Tiffany & Co. silver marks. Use the address dates below to cross reference date letters; if they don't agree, be suspicious. With the exception of Tiffany, Reed & Co., Paris, ca. 1850, all other overseas business was done under the name of Tiffany & Co. Source: Tiffany catalog (Blue Book) 1911.

The first date letter M used by Tiffanys represented Edward C. Moore, who was the head of Tiffany's silver operations until 1891. After his death, the date letters were based on the initial of the current Tiffany president. The practice was discontinued about 1965.

Electroforming is a method capable of creating metal plated objects from nonmetal models. In other words, a model of wax, styrofoam, plaster, rubber or other easily carved nonmetal material can be converted into a new three dimensional metal plated figure.

This is great for making repair and replacement parts but can also by used to make entire fakes like the Tiffany water set shown in the previous pages.

Here are the basics steps:

A model is made in clay, wax, plastic, etc 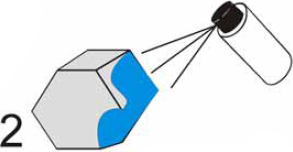 The surface of the nonmetalic model is coated with a special solution which conducts electricity. 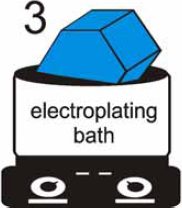 Silver, gold or other metals are applied to the model by electroplating. The plating sticks to the conductive coating applied in Step 2.

The finished product is a metal plated version of the nonmetal model.