The truth about Dazey churns

New Dazey churns have brought four figure prices across the United States. Of three new styles being made, the most troublesome has been a six-inch version which is being offered as a "salesman sample."

Many of these small new churns were mixed or "salted" into local estate auctions around the country and brought astounding prices. One of the small churns sold in a Virginia auction for $3500. Others have sold for over $1000; many routinely sell for $500-$600.

There are at least three sizes of new Dazey churns: one quart, pint, and half-pint, the so-called salesman sample size.

There were several styles of glass Dazey churns made over the years. Collectors generally group the styles by distinctive features of the glass body such as overall shape or how words in the company name are arranged. The three new jars discussed in this article are the style called "round label" from the circular arrangement of the company name on the front of the jar. All of the features in this article refer to that style only. Do not apply the clues to age discussed in this article to any other style of glass Dazey churn.

In the early years of the 20th century, E.B. Jones developed a small glass churn for home use. Nathan Dazey purchased Jones' business and relocated it in St. Louis, Missouri as the Dazey Churn & Manufacturing Co. Dazey churns were made up until about 1945. Although best known for its glass churns, the company also made metal churns. It also made can openers, knife sharpeners and other kitchen products.

Two of the new round label churns–the pint and half-pint sizes–shouldn't really be a problem. No vintage round label Dazey churns in those sizes have ever been documented. Unless sellers can prove otherwise, those sizes are fantasy products.

Did Dazey even use salesman samples? No, according to Dea and Butch Allen, who are among the nation's leading dealers and collectors of Dazey churns. The Allens have had access to parts of Nathan Dazey's original factory archives as well as communications with Dazey family descendants. So far, there is no evidence the Dazey company ever issued salesman samples for any glass churn.

"Dazey sent out only full-sized churns to display in stores," says Dea Allen. "There is no mention in any company records of miniature churns being used as salesman samples. No miniature sizes had ever been seen or reported until late 2002 when they started appearing all over the country."

The only new round label style Dazey churn that might be confused with a actual vintage product is the quart size. Original quart churns in excellent condition sell for over $2,000. Reproduction quart churns can be purchased for $100-$150 when they are honestly represented as new. Glass bodies, easily broken over the years, are the most valuable part of any glass churn accounting for about 80 percent of the value of a complete churn. It is particularly important buyers determine the glass base is authentic before making a purchase.

The original quart glass body has "1-Qt." molded in raised letters near the top of the churn front (Fig. 5). The "1-Qt." is missing from the new quart glass body (Fig. 3) "St. Louis, U.S.A." appears in sharply molded lettering in a curved line at the bottom of the original jar (Fig. 6). The same area in the new jar is heavily blurred with only fragments of some letters being legible (Fig. 4).

The blurred curved line appears on all three sizes of reproductions. References to U.S.A. are typically removed or obscured in reproductions to skirt American customs regulations. It is a violation of federal trade laws for products made overseas to be marked U.S.A., Made in America, or have US patent markings.

Longwave black light is usually a good test of age for clear American pressed glass, but it is not a reliable test of age for glass Dazey churns. Although many original churns do fluoresce, many other originals do not. There is too much variation for accurate testing.

Remember, the features discussed in this article apply only to the round label style Dazey churn shown. Do not apply these tests of age to any other style of Dazey churn. 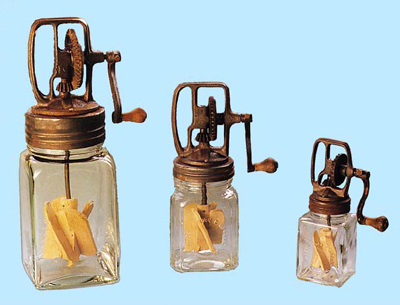 Fig. 1 Three new Dazey butter churns. The new half-pint jar at right is widely represented as a "salesman sample." Several of these small jars are known to have sold for over $1000. One example sold at auction in Virginia brought $3500. 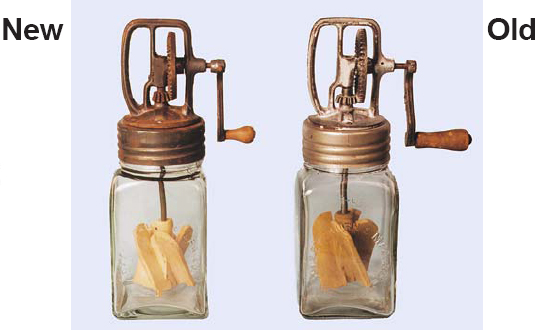 Fig. 2 New and old quart size Dazey churns. Of the three reproductions shown in Fig. 1, only the quart size was an original Dazey product. 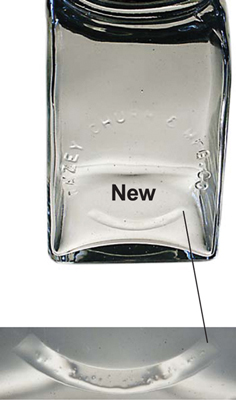 Figs. 3-4 The front of the new quart glass body does not include the molded lettering "1-Qt." at the top. Lettering in the curved line at the bottom of the jar is blurred. Bottom shows detail view of curved line of molded lettering with only small incomplete parts of letters recognizable. 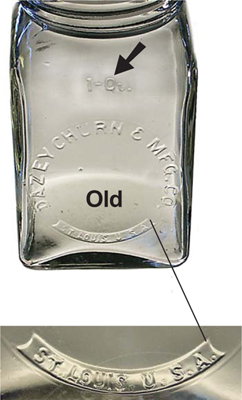 Figs. 5-6 Original quart glass body has "1-Qt." molded into the top of the jar. The curved line of lettering at the bottom is sharply molded. A well molded "ST. LOUIS U.S.A" appears on original jars. "Made in America" may also be molded in a horizontal line below St. Louis U.S.A in some original jars. 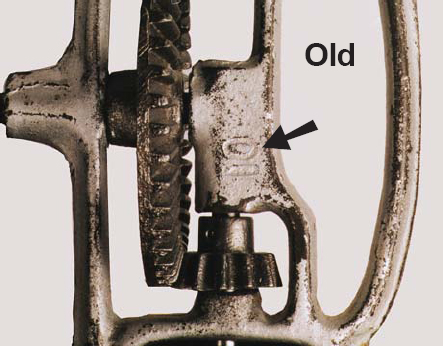 Fig. 7
The number "10" is molded into the center post of original quart mechanisms. The number is recessed below the surface. 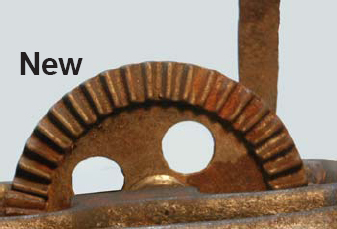 Fig. 8 The large gear in the new quart mechanism has round holes in the interior. Neither new gears nor new handles have any molded numbers or lettering. 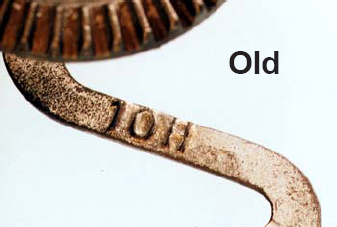 Fig. 9 A raised molded "10H" appears on one side of the handle on the original quart mechanism. 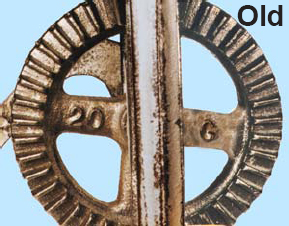 Fig. 10 The gear in the original quart mechanism has wedge-shaped holes. A molded raised "20"and "G" appear on a cross piece of the old gear. 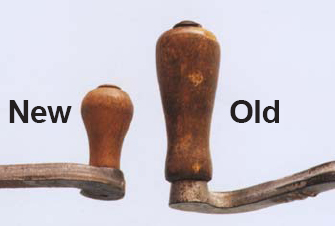 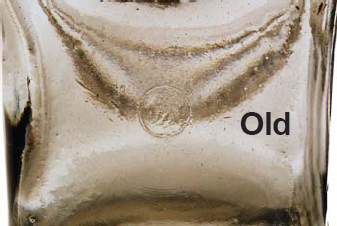 Fig. 12 Original one-quart glass jars have a slightly raised circular mold mark in the outside bottom of the base. Outside bottoms of new one-quart jars are smooth and do not have this mark. 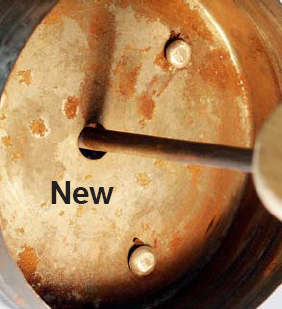 Fig. 13 Inside view of lid on new one-quart jar. The rivets holding the gear mechanism to new lids are made of aluminum. A magnet will not stick to aluminum. 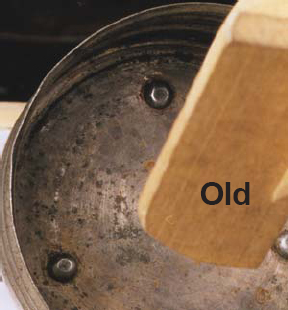 Fig. 14 Inside view of lid on original one-quart jar. The rivets holding the gear mechanism to old lids are made of steel. A magnet will stick to the steel rivets. 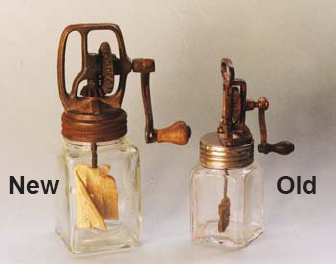 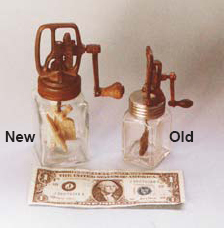 Figs. 15-16 The new so-called "salesman sample" Dazey churn, is shown at left in Figs. 15-16. It is six-inches high overall and holds about four ounces. No original glass Dazey churn was ever made in this size. The only authentic small glass churn known to collectors is shown at right in Figs. 15-16. It was made in the 1870s as a toy or doll-sized item, not a salesman sample. Both churns are photographed with a one-dollar bill to show relative sizes in Fig. 16. 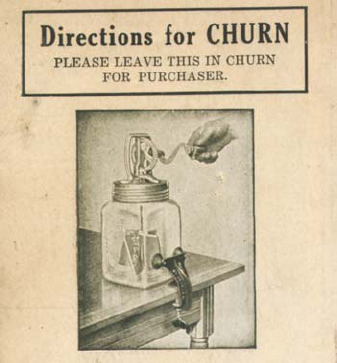 Fig. 17 An original Dazey company brochure showing a glass Dazey churn in use.