The copper foil technique is a relatively modern method in the centuries old practice of making leaded glass. It dates from about 1880. Although widely attributed specifically to the workshops of LC Tiffany, it was a general evolution developed by many glass artisans working in the last quarter of the 19th century.

The copper foil technique was developed to accommodate tiny pieces of glass and the curves of Art Nouveau shades like those designed by Tiffany. Relatively wide lead came previously used for centuries to hold big flat pieces of glass, was not suitable for making curves.

In the copper foil technique, edges of glass are wrapped in thin copper foil about .002 inch in thickness. The foil covers the entire edge of the glass and about one-sixteenth of the front and back sides. Unlike lead came which is soldered only at points of intersection, the copper foil is soldered along the entire joint where it touches another piece of glass. A shade with hundreds of pieces of glass all soldered edge to edge is a very strong slightly flexible unit.

Generally, vintage leading is more narrow than modern work. The soldered copper foil joints on quality vintage leaded shades are rarely over one-eighth inch. Typical leading in high quality leaded shades such as Tiffany are generally about three-thirty seconds of an inch. The only general exceptions would be in patterns where wider leading intentionally forms a part of the design such as vines or spider webs. When used as part of the design, leading may be wider.

Foil is applied evenly to old glass with the same width of foil to the front side as the back. Old leading is very consistent in width; modern can vary considerably in width. Old leading is very consistent in height and is usually fully rounded on both back and front sides. New leading can vary considerably in width and is often quite flat in cross section especially on the back.

Although copper foil is still used in modern leaded glass, it is so labor intensive that high quality new work is often the same cost as vintage work. 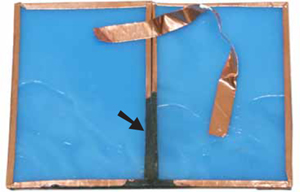 Fig. 1 An example of loose foil and two pieces of glass wrapped in copper foil. Pieces are joined by applying solder to the copper wrapping. Solder has been applied to about half of this joint (arrow). After the entire shade is assembled, additional solder is applied to all joints to build up the leading to a consistent width and height.

Fig. 2 The copper foil is wrapped around the entire edge. This is a side view of two pieces of glass wrapped in copper foil before soldering. 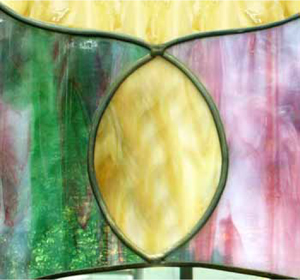 Fig. 3 Copper foil produces slender joints. Typical vintage copper foil joints, like this example, are generally about three-thirty seconds of an inch, some only one-sixteenth of an inch.