Reproduction teddy bears are coming closer to originals. Twenty-inch originals comparable to the new sample in Fig. 1, sell for $500-$1,500 or more depending on maker, condition, color and features. We found the new bear offered at $175 retail.

The overall appearance of these new bears has been carefully planned to appear as similar as possible to originals. The synthetic mohair fabric, or plush, has been clipped around all the normal wear points such as joint sockets to suggest wear and aging. Brown staining has also been applied at the factory to further imitate age. Staining is scattered across the body and extensive on the paws or pads.

Pads deserve special attention when determining age. The great majority of pads on pre-1940 bears, were almost always made of a different material than the fabric covering the body and limbs. Pre-1940 pads were generally cut from a separate material, trimmed to fit and sewed in place. The most common pad material was felt but other materials were also used including painted canvas (rexine) and velvet. Pads on some early bears are reinforced with cardboard.

After ca. 1940, many pads begin to be made from clipped versions of the body fabric like the reproduction pad in Fig. 4. They look different from the body only because the pile, or fur, has been very closely clipped. This is a low cost, time saving method to make pads that look like they are made of a contrasting material like the earlier bears.

The only exception to the above general rules on pads are for very small bears. Many original bears under about 8″ do not have separate pads. Ends of limbs on most small bears were usually only seamed together without a separate pad.

Another important inspection point is the eyes. Eyes on almost all the earliest original bears, ca. 1903-1920, were ordinary shoe buttons, usually shiny black. Naturalistic glass eyes were widely used from about 1920 to the 1940s.

The new sample in Fig. 1 has black plastic eyes glued in. Although new plastic eyes can be replaced with new glass eyes or even an old set of eyes, it is fairly difficult to achieve a good fit with needle and thread. Glue is the quickest way to set most new eyes. Many new white or light colored threads and virtually all modern glues fluoresce under long wave ultraviolet light commonly called black light. Loose, wobbly eyes, or eyes poorly spaced in relation to the face and head are all warning signs that eyes may be replaced. The new bear in Fig. 1 has an internal gravity-activated "growler" noisemaker. As the bear is tipped over, a gravity-powered plunger slides to the bottom of a mechanism forcing air over a reed. This style of noisemaker was generally used in the earlier original bears rather than the squeeze-style noisemakers which appeared in later bears. Apparently whoever designed the new bears wanted them to appear as old as possible.

Here are some other general rules of thumb to help you date teddy bears. Long arms are generally are sign of an earlier bear. Early bears typically have arms that extend below the knees. This permits older bears to be posed as if walking on all four paws (Fig. 8). Most older front paws, or hands, are curved. Some have an almost hooked or spoon shaped appearance. A long snout or nose is generally another sign of an earlier bear. Long feet, as measured from the ankle to the toes, are also usually a feature of older bears. Later bears have shorter, more compact feet. Many early bears also have a hump or swelling in their backs.

Stuffing varies. Many early bears were stuffed with excelsior, wadded wool or kapok, a natural fiber used to stuff mattresses and toys. Before 1930, most bears were covered in mohair, an organic fiber from Angora goats. Synthetic mohair, or plush, largely replaced natural mohair after the 1930s.

High quality limited edition and "designer" teddy bears are also made today. Although many of those bears are constructed like vintage bears, they are generally very carefully marked and aren't likely to be offered as old. Besides, many new designer bears equal or exceed the price of vintage bears.

The biggest problem is the cheaply made mass produced reproductions filtering into the antiques market and being sold as old. 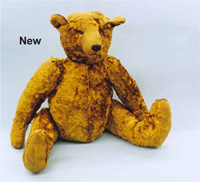 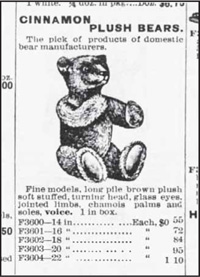 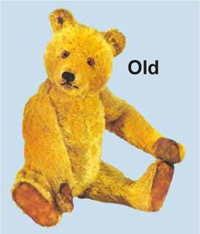 Fig. 4 Pads on new bear in Fig. 1 are the same fabric as the body and limbs. The only difference is that the fabric on the pads has been clipped. Our sample has been deliberately "aged" with spots of brown staining. 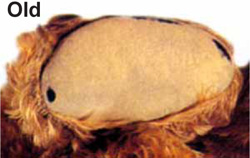 Fig. 5 The pads on the great majority of pre-1940 bears are made with a different fabric or material than what covers the body and limbs. The most commonly used pad material was felt. 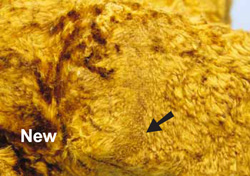 Fig. 6 New bears are artificially aged by clipping the fabric in typical wear spots. These include areas around joints, high spots such as shoulders and random patches about the body and limbs. Brown staining is also used especially on pads. 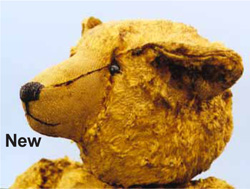 Fig. 7 The nose and mouth on the new bear in Fig. 1 is stitched, or embroidered, in black thread. Eyes are black plastic. Fabric in muzzle area has been clipped. 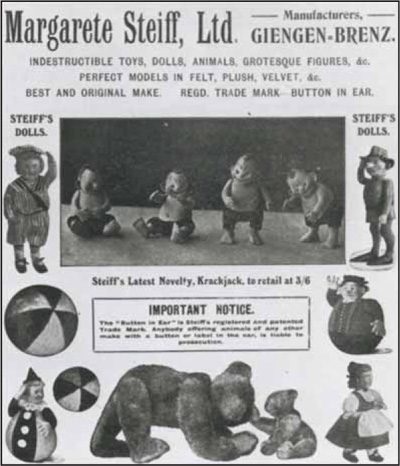 Fig. 8 Advertisement ca. 1910 for Steiff, a German toy maker known for quality teddy bears. Arms on early bears are long enough to pose the bear on all four paws. Also note the length and curve to the front paws, or hands, another typical feature of many early bears. In 1907, at the height of the teddy craze, Steiff produced 974,000 bears.