Reproduction shaving mugs have been sold for several decades; some are American, others have been imported from Japan and England. Comparing how new and old are made, learning what marks are found on new mugs and understanding how decorations are applied should help you avoid most reproductions being made today as well as those of the last 40-50 years.

Shaving mugs are generally of two basic categories: those made for home use, and those for use in barbershops. Mugs with decorations of the mug owner's trade or business are call occupational mugs; those with symbols of the owner's club or secret society are called fraternal mugs. All types have been copied and reproduced.

One of the easiest ways to catch many reproduction mugs is by the mark. Many reproduction scuttle-shaped mugs were made in England in the 1960-70s and carry one of the marks shown in Fig. 15 (Foley, Olde Foley, Staffordshire, Lord Nelson). In addition to the mark, many of the new English scuttle mugs can be identified from a single drainage hole in the soap compartment; old mugs generally have three or more drainage holes. The marks in Fig. 15 are used on several shapes and sizes.

Other Japanese reproductions of about the same time are marked with a four digit number (Figs. 10-12). These originally came with a paper label which was easily removed. This particular group of mugs and others are often 'enhanced' today by adding a name in gold. You can detect these altered mugs by looking at the space between the top of the decoration and the top rim.

The names on old mugs, like Figs. 4-5, usually take up about 1/5 to 1/3 of the mug. Now compare the space above decorations on most new mugs like those in Fig. 10. When names are added to these new mugs the lettering looks small and crowded like the illustration in Fig. 3. Decorations on old mugs were designed to leave plenty of room for a name at the top. If a name looks squeezed or unusually small, be suspicious; genuine old mugs always allowed ample space for the name.

A second series reproduction mugs from Japan began appearing in the late 1970s. One group was decorated with rustic log cabin scenes in blue and white done in a Currier & Ives style (Fig. 2). Another group of four mugs was done in typical Victorian floral patterns (Fig. 20). The most common mark on these two groups is also a four digit number. The blanks used for those mugs are still being used today with faked marks of Nippon, RS Suhl and RS Prussia (Fig. 13).

In general, it's a good rule to be extra cautious when you encounter any unusual mark. Most all old mugs were done on blanks made in either Germany or France and occasionally America. As a rule of thumb, old marks generally include a city name or place name such as Saxony, for example, or the name of a country like France or Germany--or the name of a known old barbershop supply firm like Koken. Almost all genuine marks on old mugs can be found in any good book on china marks. True, some old mugs have no mark, but if there is a mark of some kind present, it should include one or more of the features described above.

But don't rely on marks alone to form your opinion of age. Marks can be forged, added and altered as shown in the Nippon and RS Suhl marks in Fig. 13 and new decorations could be applied to a genuinely old blank mug. Some blanks used for reproductions have been used for years and carry several fake marks. These marks change from year to year so in the future watch for different marks than the ones discussed here.

Original occupational and fraternal mugs were hand painted by skilled artists. The paints used in the decoration were fired two to four or more times and rarely show wear. However, it is perfectly normal for the original karat gold trim and lettering to show reasonable wear consistent with age. In fact, if the gold is too perfect, be suspicious.

An authentic occupational shaving mug is shown in Figs. 8-9. The normal wear on typical old gold is obvious in the handle and top rim in Fig. 8. The close up of the fired on painting of the old mug, Fig. 9, is sharp and shows no wear. Individual brush strokes are apparent; the painted lines are sharp-edged and distinct.

For comparison, a new mug with a similar general store decoration is shown in Figs. 6-7. How do you tell it's new? There are several ways.

The images on new mugs are generally printed by silk screen or are decals. If you look at the enlargement of the new decoration in Fig. 7, you'll see that it's blurred and does not have sharp-edged lines like the original handpainted scene. For example, compare the bolts of cloth at the arrows in both pictures--the handpainted bolts are sharp and well defined compared to the similar shapes in the new piece. And remember, perfect gold trim and lettering is rarely found on genuine old shaving mugs.

Whether or not to re-gild old mugs is debated. Some collectors prefer new gold on their mugs, others prefer the original condition regardless of wear. If you object to new gold, look for these signs of re-gilding: 1) tiny spatters of gold paint, fingerprints, gold of different colors and a purplish background showing through the gold; all are signs of new work.

From 1953 to 1955, the Warner Lambert Pharmaceutical Company sold their Sportsman brand of shaving soap in hand decorated occupational style shaving mugs. The main feature that identifies this group of mugs is that the name of the occupation is in gold lettering instead of the owner's name. In addition, the word "The" appears before the name; for example, "The Doctor", "The Fireman" etc.

Below are the 24 occupations found in the Sportsman series with the word "The" before each one.

A total of 375,000 of these mugs were sold through department stores and quality drug retailers. Later, personalized versions of these mugs were available which a customer could order with his own name. All pieces originally carried the trademark shown in Fig. 25. The markings appear in several forms: embossed, raised and printed or in combination.

The word "The" is the main clue to the real age of these mugs but take care that the original gold lettering or the trademark is not painted over or filled in. Some of the Sportsman mugs may be identified by a slight bulge on the inside of the mug where the handle joins the body; however, this appears on only some of the mugs. Although of fairly recent manufacture, this group of mugs is becoming a collectible in its own right but still should not be confused with antique mugs or sell for the prices of genuine occupational mugs. A period advertisement for the Sportsman mugs is shown in Fig. 24.

Figs. 28 & 29 are both new hand painted mugs sold as limited editions and custom made gifts. The quality of work on these and similar mugs is highly regarded and very collectible. However, if these mugs enter the antiques market, they might be mistaken for old.

Since this quality of new mug costs $50-100 and more, they are almost always marked by the decorator because the mark is part of the value of the mug. The marks shown in Figs. 30 & 31 from these mugs are typical decorators marks--very unique and distinct from old marks. Almost all old marks should be found in a book on old china marks. New marks like the ones in Figs. 30 & 31 will not be found. Approach any unusual mark with caution. Note also that the mug with the cable car has the words "cable car" in place of an owner's name. 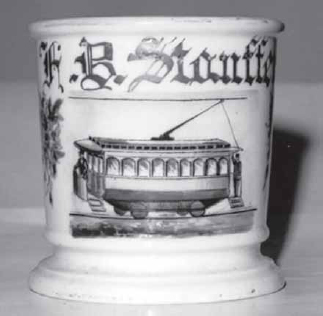 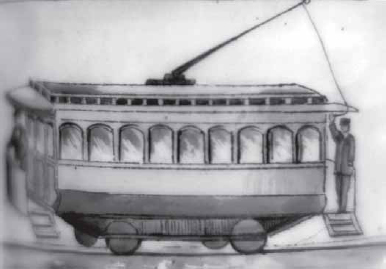 Figs. 1-2 Hand painted shaving mugs are considered by many to be miniature works of art. The fine occupational street car conductor mug shown here is a Victorian-era original. 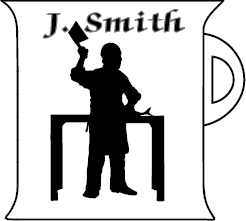 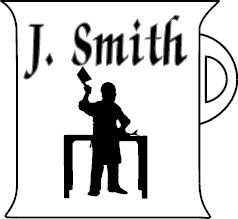 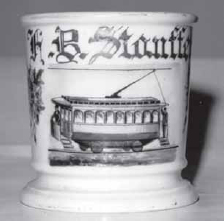 Figs. 3-5 Sellers sometimes try to increase the value of a mug by adding a name to an ordinary mug (new or old) thus creating an occupational mug. The designs used on old mugs allowed 1/5 to 1/3 of the side of a mug for a name as in Figs. 4-5. When a name is added to regular mug, the lettering is often cramped and poorly fit like the illustration in Fig. 3. 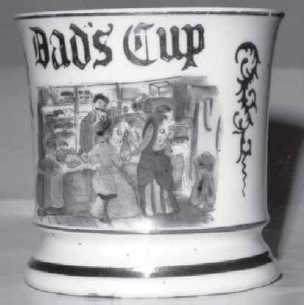 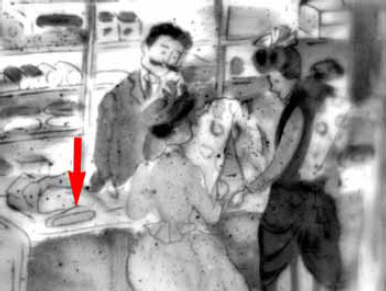 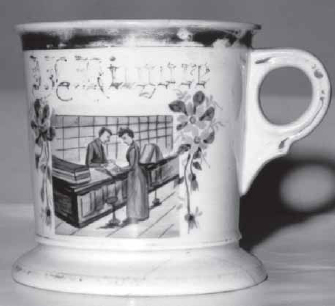 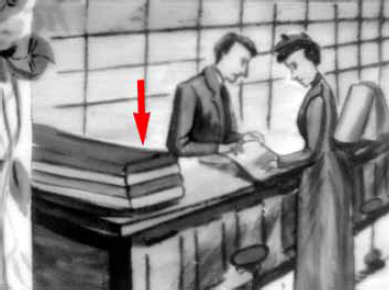 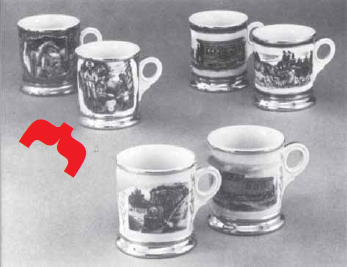 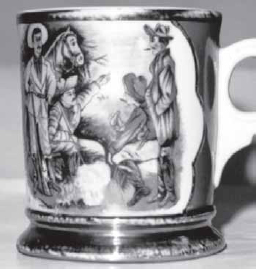 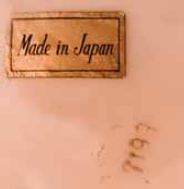 Figs. 10-12 A group of mugs made in Japan with a close up of the cowboy mug (arrow) in Fig. 11. This group is marked with a printed four digit number--usually red or blue--in a couple of different styles (Fig. 12). The original paper labels, though, are usually missing. Original wholesale price $4.50 each. 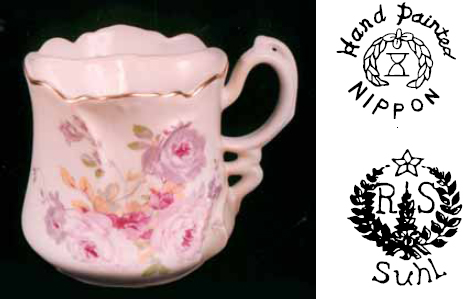 Fig. 13 This new shaving mug blank was developed in the 1970s for the reproduction wholesale trade. It may still be in production. Over the years, it has had many fake marks applied at the factory including Nippon, RS Suhl and RS Prussia.

Fig. 14 This new scuttle mug blank has been used by reproduction wholesalers since the 1970s. It has a variety of faked marks including the fantasy mark at the right of the mug. The mark reads "Hand Painted" but all the decorations are decals. 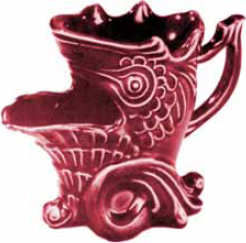 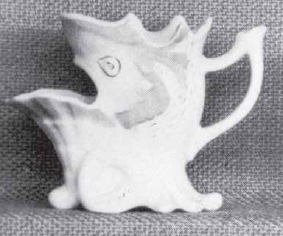 Figs. 16-17 All types of original mugs are reproduced including figurals. The new fish head mug in Fig. 16 is a heavy pottery with either a brown, maroon (shown here) or green glaze. It is a copy of an old original fish head scuttle mug in Fig. 17. The original is a lighter weight all-white china with hand painted color highlights. 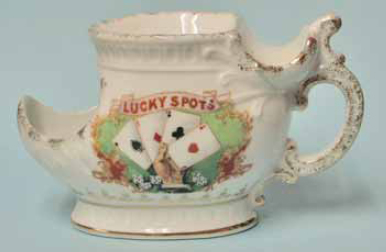 Fig. 18 New mug made in Japan, marked Brandenburg with anchor. Also shown in the catalog photo in Fig. 19. 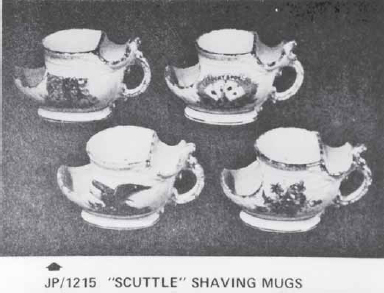 Fig. 20 Group of reproduction mugs with floral decorations as shown in a catalog of reproductions. These mugs are often found with fake marks of Nippon, RS Suhl, RS Prussia, Limoges and other 19th century manufacturers. 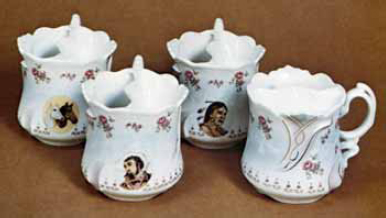 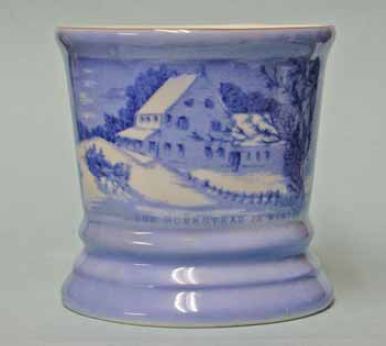 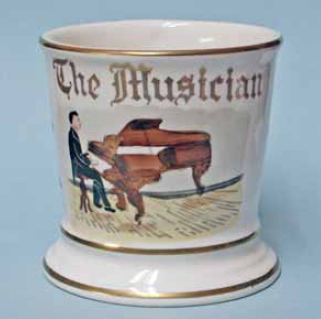 Fig. 23 Sportsman hand painted mug. Note the word "The" which appears before the occupation on all the Sportsman mugs. 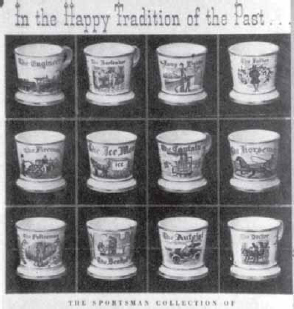 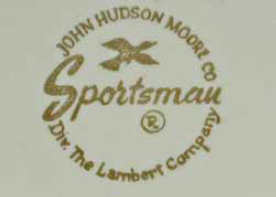 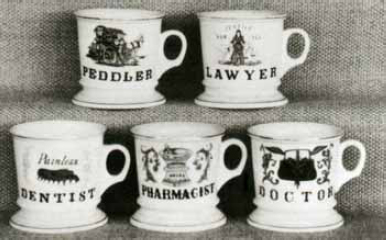 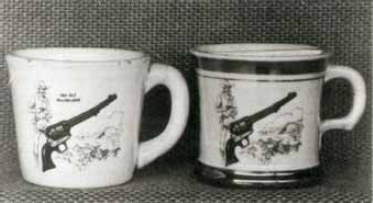 Fig. 27 Don't assume old-looking decorations are automatically old. This Colt Peacemaker is one example of a new decal still available to china painters. Most new decals are used on new blanks like the coffee mug on the left. Keep in mind, however, that new decals can also be applied to old blanks. The genuinely old shaving mug on the right has had a new Colte Peacemaker applied. 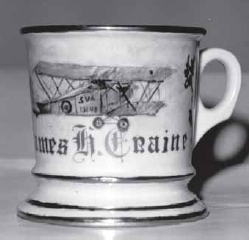 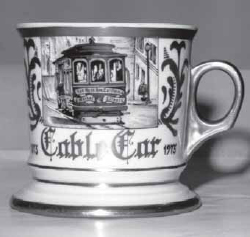 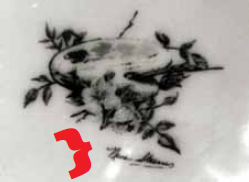