What makes new Roseville so deceptive?

One reason may be the incredible range of quality of new pieces. True, most are badly made but some are so well done even experts need to look two or three times. If buyers see truly bad pieces first, it seems they tend to become over confident in their ability to spot the reproductions. They base their judgements of age on overall appearance. When they encounter a well done reproduction, their suspicions are not aroused enough to conduct a step by step system of specific tests. They buy the piece and only later, usually when someone else points out the problems, do they realize it is a reproduction.

The best way to avoid the new pieces is to maintain a healthy skepticism about any piece of Roseville you examine. Don't assume you know all the patterns and shapes being reproduced. Different ones are continually exposed.

There are a number of clues that apply to all Roseville reproductions regardless of shape or pattern. First, look at the mark. Virtually all authentic Roseville made 1937-1953 with the raised mark includes "U.S.A." between the word Roseville and the shape number (Fig. 6). The only time an original piece might not include the U.S.A. is generally due to space restrictions as found on small bases of some sugars and creamers.

With rare exceptions, no reproductions include U.S.A. because they are made in China. Including U.S.A. in the mark would violate U.S. Customs laws. A few early reproductions, like Magnolia shape #90- 7, imported in late 1996 do include a raised U.S.A. This was discontinued almost immediately, however, due to Customs enforcement. Some reproductions also include a very faint U.S.A.; however, the other parts of the mark are fully raised. If the U.S.A. is missing or not as highly raised as the rest of the mark, it's probably a reproduction.

Next, check the paint and glaze inside vases. Originals are fully glazed inside because they were meant to be used as functional vases and had to hold water. The first Roseville reproductions are not fully glazed and have a rough textured surface inside. Paint on originals almost always begins to fade on the inside within a couple of inches of the top rim. After all, why paint areas that would not be seen? By contrast, the insides of a majority of the new pieces are fully painted. The new paint helps hide the rough surface. Backs and bottoms of new pieces are also frequently, but not always, painted

All the general rules above would have caught the new Freesia wall pocket. The letters U.S.A. are missing from the mark (Fig. 5) the back is painted (Fig. 3) and the inside is entirely painted.

There are also some specific differences between old and new Freesia wall pockets. Probably the most obvious differences are on the back side. The original back is perfectly flat except for three raised bumps (Fig. 4). The back of the reproduction is bordered by a continuous raised rim (Fig. 3). Also notice that the back of the original is not painted, only glazed. The back of the reproduction is entirely painted. Original handles are larger and original rims flare more (Fig. 7).

Another minor but interesting difference is in the zigzag lines of texture beginning in the bulbous bottom. In the original, they appear to the viewer's left; they are on the viewer's right in the reproduction. 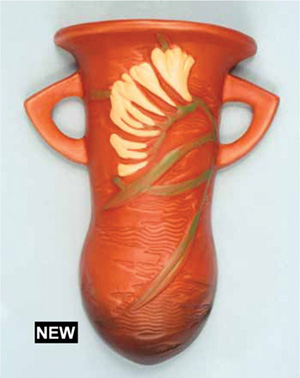 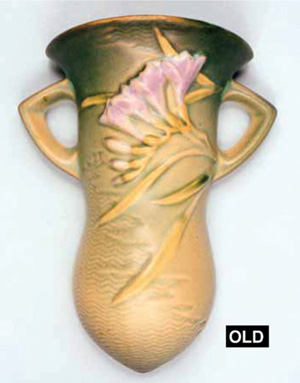 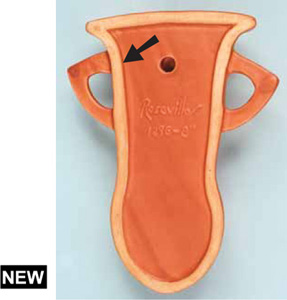 Fig. 3 Back side new wall pocket. Note raised rim around edge which is not on originals. Also note that the back side is painted; the original is not painted. Imitation raised mark does not include U.S.A. (Fig. 5). 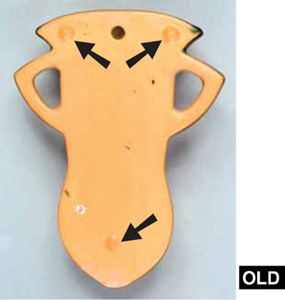 Fig. 4 The back side is left unpainted; no raised rim around edge. Note the three raised bumps at top and bottom (black arrows). Original raised mark is hidden by thick glaze but clearly shows U.S.A. between Roseville and shape number (see Fig. 6).

Fig. 5 Line illustration of raised mark that appears on new Freesia wall pocket. The critical difference is that the letters "U.S.A." are missing from the new mark.

Fig. 6 Original raised mark that appears on genuine Freesia wall pocket. The original includes U.S.A.. In this case the old mark is also at an angle and the tails on the "R" and "e" are longer. (The angle and tails are pointed out as differences in this specific example; angles and tails are not a general indication of age). 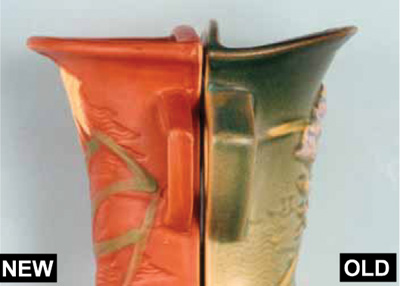 Fig. 7 Side view of wall pockets. The original has a much longer and broader flare to top rim. Handles on original about twice as wide as reproduction.