Motion lamps are a type of novelty lighting with moving, or animated, scenes. The motion is created by a cylinder in the center of the lamp which turns powered by air rising above the warm electric bulb.

The new lamps that will probably cause the most problems are five copies of highly sought after scenic designs originally made in the mid-1950s by an American company named Econolite. These include a locomotive, early auto, sailing ships, water mill and aquarium. The new lamps are made in India and retailed for about $30-$40 each. Econolite originals of comparable designs sell for $225-$350.

Before discussing the differences, let's look at similarities between new and old. First, the new Econolite-styled lamps are the same height and same oval shape (as viewed from above) as many of the company's originals made in the late fifties and early sixties. The oval shape allowed for a wider surface area for the design and created a panoramic effect. Original oval lamps are generally more desirable and harder to find than their round counterparts so the reproductions copy the best shape of the vintage pieces.

New shades are made of plastic similar to the old in color and thickness. New cylinders are very close to the same size as originals. Slight size differences between new and old are not meaningful because many original cylinders have shrunk slightly from heat and age. New cylinder tops are metal and have twelve fan blades, the same as originals.

On original scene sleeves the printing is identical on both side. This created richer color when the lamp was turned on. Both sides of reproduction scene sleeves are also printed but they are not identical. Only the most important parts of the new design are repeated; coloring on the ship, for example, but not the surrounding water.

Switches in new lamps are wired into the power cord. Switches on old lamps are built into the bases.

Finally, all the new lamps have very bright, rich colors. Even a mint in the box original does not have the color intensity of the new reproductions. Although the new shades are brighter, they lack the fine detail and tonal gradation found in the originals. For detailed comparisons of individual models, refer to the captions that accompany the photos.

In addition to reproductions of classic oval lamps from the 1950s, later motion lamps made up until the 1980s are also back in production. These lamps, called Op (short for optical) or psychedelic, were introduced in 1967 and made through the mid-1980s. The Op lamps, like Op art posters of the time, used principles of physics to create eye dazzling optical illusions with simple geometric patterns. Optical effects were enhanced in the lamps with the added dimension of motion. Production ceased when the plastic used in their manufacture was found to be carcinogenic.

Bases, metal harps, bulb sockets, cylinders, metal fans, outer shades and power cords are virtually identical on new and old. The best feature to identify the new Op lamps is their use of two vertical seams in the cylinder and shade. The same original parts have only one vertical seam. A more subtle difference, but one that is easy to see when the lamps are side by side, is that the new plastics have a slight blue tint.

Also check the plugs; new plugs are marked Taiwan. All the new Op lamp shades are marked "India" in small print in the bottom black border. Finally, all new Op lamp cylinders spin clockwise while most old ones spin counterclockwise.

Original Op lamps start at about $100. The new lamps retail for about the same as the scenic lamps, $30-$40 in shops and catalogs.

When an original Antique Car lamp sells for $350 and a nearly identical reproduction is offered for only $30, there is cause for concern on what effect this may have on the collectibles market. That is why we have gone into considerable detail explaining the differences between new and old. Understanding the differences between the two will help all buyers, collectors or dealers, avoid mistakes.

Don't rely on one test alone to determine age or authenticity. Examine each part of the lamp – shade, cylinder, base, tops and bottoms – separately. If the features of any one part aren't correct, be suspicious of the entire lamp. 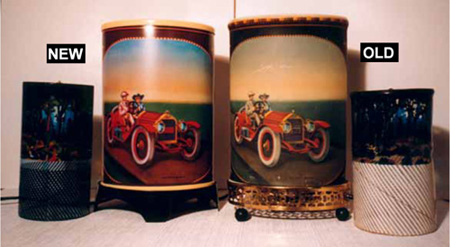 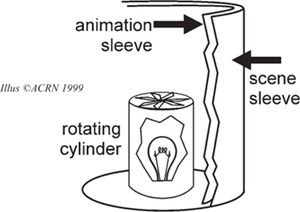 Fig. 2 Basic parts of a typical motion lamp. The shade is double walled. The side towards the viewer is called the scene sleeve; the inner wall is the animation sleeve. The cylinder rotates from the heat rising from the light bulb over which it is suspended. 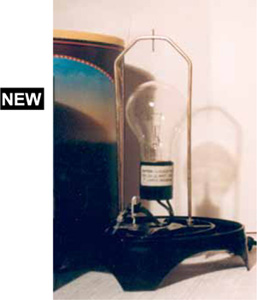 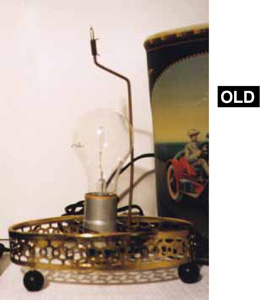 Fig. 4 Original Econolite pierced metal bases with brass plated finish on three ball feet. The rotating cylinder is supported on a metal rod angled out over the bulb. 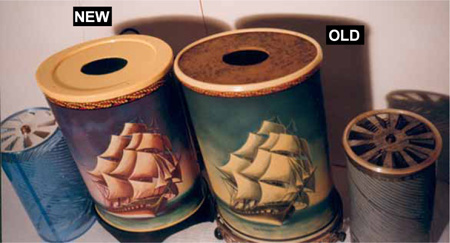 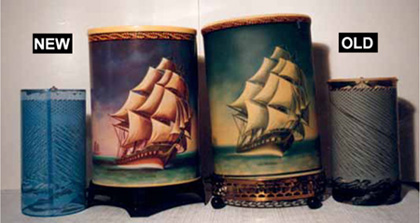 Fig. 6 New lamp on left, Econolite original on right is Sailing Ship, Model #772, © 1958. Features Old Ironsides, Mayflower and Windjammer. Old lamp has better animation with rain falling in pellets; rains falls in sheets in new. Waves thrown by bow of old ships are blue, colorless in new. Ships are colored gray in old, a more natural brown in new. Sky in old is blue only; new sky has varied tones from blue to purple. This model is probably the best of the new lamps. 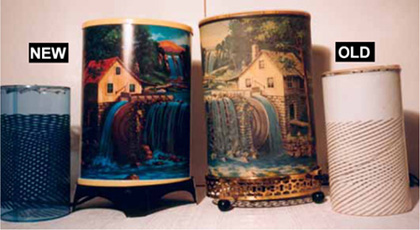 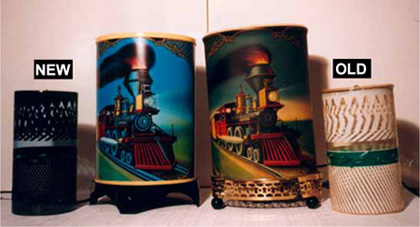 Fig. 8 New lamp on left, Econolite original on right is Train, Model #763, © 1956. Features famous steam locomotives General on one side and John Bull on reverse. Most obvious difference is the color of wheels: blue on the new, gray on the old. Engineers on the new are noticeably less realistic. Animation is weaker on the new lamp because the animation sleeve has smaller light opening patterns. This is especially true in the area of the wheels. 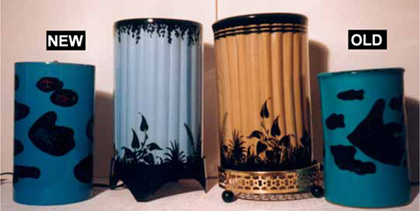 Fig. 9 New lamp on left, Econolite original on right is Tropical Fish, Model #751, © 1954. Effect of fish swimming through water. Both original and new lamp are round, not oval. Pleated area of new shade is white translucent plastic; old shade is stiff paper usually turned tan or yellow and often cracked or warped. Air opening in the new shade is 3¼″ dia.; in old only 1¾″. New cylinder top has seven slotted openings; old has ten. Black silhouette pattern at top of inner shade is different on old and new (see photo). 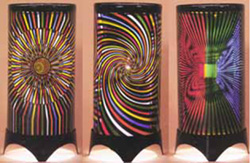 Fig. 10 These new Op motion lamps are virtually identical to the originals made from the late 1960s to mid 1980s.