These and other names are seemingly money magic. When buyers bring out their checkbooks, they are paying more for the name than the item on which the name appears.

Clever fakers and reproduction wholesalers are apparently happy to oblige this market. To the fakers, every garage sale is a warehouse of goods just waiting to be stamped, printed or sandblasted with the magical names. Is your line of new cast iron moving a little slow? Boost sales by reworking the mold to include a company trademark.

Here are some easy to follow tips on avoiding fakes and reproductions of collectible brand names.

Many items reproduced in cast iron today were made originally in other materials. Check reference guides to know if a particular item was ever issued in cast iron.

Many buyers are confused when a genuinely old but originally unmarked item has had a desirable mark recently applied. With a little common sense and logic you can catch most of these newly marked items.

The vegetable cutter in Fig. 7 is a good example. A faker has taken a genuinely old unmarked piece by some unknown manufacturer and applied a new Keen Kutter mark. How can you tell the mark is new?

In other words, old genuine marks should show the same wear, patina and surface texture as the surrounding area. If a scratch stops abruptly where a mark begins or if a mark covers a scratch, the mark has been applied after the piece has been subject to wear. Pieces marked at the time of manufacture will show normal wear running through marks.

The fakes made one-at-time in garages and basements can be some of the more troubling pieces buyers face. Due to their low numbers, they don't appear with enough regularity in the market to cause alarm. Limited only by the imagination of the forger, these pieces are often bits and pieces–new or old–assembled into one fantasy creation. The paperweight in Fig. 9 is typical of this category.

Although not generally known, new glass paperweights in a variety of shapes are commonly available in any crafts shop. The paper inserts can be a photocopies or digital scans from reference books on antiques, history books or old catalogs. Or in some cases, genuinely old paper originally used for some other purpose like common magazine advertisements or routine office stationery like invoices or letterheads. It's relatively easy to cut out paper images and glue them to the underneath of the paperweight.

New paperweights and many other do-it-yourself fakes are commonly assembled with the faker's secret weapon, the hot-glue gun. That's why it's a good idea as a matter of routine to examine suspect pieces with a black light. The new glue fluoresces as does many other new materials including most papers.

Special thanks to Rilla Simmons for suppling the photos of Keen Kutter fakes. 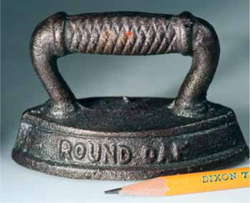 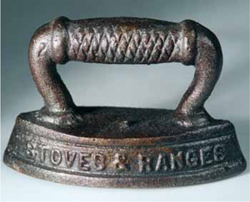 Fig. 2 Back side view. Cast iron is very crudely made with widespread pitting and obvious grinding marks. 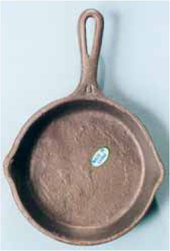 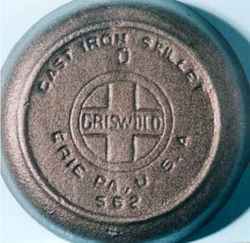 Fig. 4 Markings on bottom are virtually identical to original. Obviously crude casting is easy to detect. This is a copy of the harder to find 1950s version with the longer opening in the handle. Originals sell for about $125.

Fig. 5 Rough surface and typical bump on new cast iron surface. Bumps like this are particularly illogical on handles and other surfaces that would be touched in normal use. 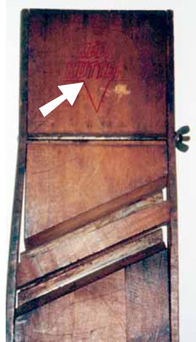 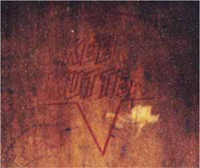 Fig. 8 Close up of new mark on vegetable cutter. Note how the new mark goes over a scratch and dent. If the mark were original to the piece, whatever made the scratch and dent would have damaged the mark at the same time. Conclusion: the mark was applied after the dent and scratch were made. 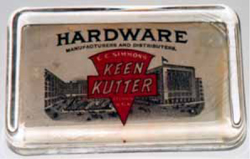 Fig. 9 Fake assembled from new glass paperweight and color photocopy or digital scan of a letterhead. Note that the paper insert has two darkened areas in upper corners. Shadowing thought to be caused by duplicating alterations made by faker. 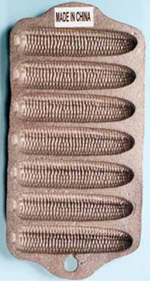 Fig. 10 Top side of fake Griswold pan with Made in China label as it comes from importer. 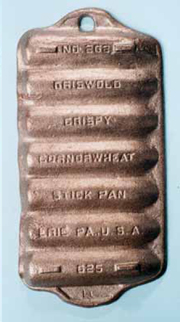 Fig. 13 Brown glass bottle with faked Keen Kutter logo. The logo was sandblasted or otherwise etched on side. Frosted background with shiny letters. Quite possibly made with the same stencil used to etch the same logo on the stoneware bottle in Fig. 14. Other glass items with similar faked etched logos include tumblers, ashtrays and paperweights. 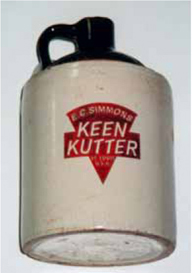 Fig. 14 Old stoneware jug with faked Keen Kutter logo. The logo was been sandblasted or otherwise etched on surface of jug leaving the letters raised above the surrounding background. The background is painted red.