My past experiences as Editor-in-chief of both the Redskin and Artifacts magazines provided an excellent opportunity to personally examine thousands of genuine, ancient artifacts in private and museum collections. I also examined thousands of reproductions.

This has lead me to coin a new word, "artifake". This is my term for the current wave of incredible reproductions. Compared to most old fraudulent reproductions made during the past 150 years, today's artifakes are difficult to detect. Old time fakes often were absurdities because the fakers relied on pictures in books or pen and ink drawings that sometimes were merely figments of the artist's imagination.

Today's reproductions are a different breed. Since the 1940s, a tremendous amount of information and documentation has been published on American Indian artifacts. These valuable resources have provided the inspiration for many modern artifakes. The clever fraud makers invest in genuine artifacts to copy and duplicate. Some are known to have visited leading museums, producing three dimensional drawings and blueprints of choice specimens.

Let me share a few examples. Authentic "Great" pipes of the ancient Southern cultures were made with brownish green Meigs county steatite12 from Tennessee or blackish green steatite from Virginia and North Carolina. This same material is being quarried today to make modern copies. The new steatite carves easily and takes a nice polish. Clever forgers sometimes deliberately include damage and wear marks to suggest age. The final step is dipping the new piece in a chemical bath to add a false patina.

Advancing collectors have always been attracted to pipes and consider them very desirable. Perhaps the most famous reproduction is the Hopewell Effigy pipe. Only several hundred genuine Hopewell effigy types have ever been discovered. Yet there are so many fakes in the market, your chances of finding the real thing must be one in five hundred.

Until about ten years ago, these reproductions were easy to spot because the fakers made too many mistakes. The new fakes, however, are exact duplicates and are made of the proper raw material. Most genuine Hopewell pipes come from a burial site and often feature encrustations and calcium deposits on the surface. Newly made pipes are taken to a crematorium and calcined with human remains. The fact that some of the modern replicas may crack or explode when subjected to such intense heat poses no problem. Broken fakes are sold as "ceremonially killed" artifacts at slightly reduced prices.

Pipes are not alone in the new wave of reproductions. Fifty years ago, the market was flooded with fake birdstones2. Most are obviously incorrect. Others were good enough to pass and still grace cabinets of major collections. Thirty years ago faked bannerstones1 begin to appear. Many were covered with faked patinas and artificially weathered to look old. Almost any artifact meeting of today will feature a few of these monstrosities. Until recent times, pendants and gorgets8 were never reproduced in quantity. Today, authentic examples may bring $500 or more which gives fakers plenty of good reasons for making these forms. And don't overlook reworked and repaired original but damaged items.

No artifact escapes reproduction. Highly desirable shell masks and gorgets are acid etched from patterns by using the photo resist method. The non-design area is protected from etching by a wax covering, Then an application of decaying animal flesh will add the final touch to suggest burial association. Believe me, it's quite convincing. Discoidals6 are a current modern favorite of the fakers. Attractively patterned granites, quartzites, etc. are lathed by competent stone workers. After shaping, the product is judiciously pecked in a few spots and hand polished to provide a subtle "old time" finish. Lowly Celts are a prime target with any suitable river pebble being ground on lapidary green wheels, polished with carborundum paper, then buried in manure piles to acquire a well-aged appearance. Grooved stone axes could be purchased for $50 to $100 until recently. Today, choice specimens are priced from $250 to $1000 and more. Artifakers have noticed the trend and plenty of well-made duplicates are now available. Miniature jackhammers are used to work the stone to the desired shape, then the form is sandblasted to give a nice weathered look. Central Ohio has become a distribution center for some of the aforementioned artifakes.

I have purposely left my comments about flint7 artifakes until last. It has been said that for every single ornament, bannerstone, birdstone, pipe, axe or Celt ever found, more than 10,000 flint projectiles have been discovered. Yet, flint artifacts are the most popular form of ancient American Indian collectible. Relatively few are reproductions, except the 7" to 20" monsters. Most noticeable have been reworks: genuinely old blades or knives to which notches have been added to increase the selling price. Broken or damaged points11 were also repointed and shaped into perfect specimens. As the sheer number of demanding collectors multiplied, more flint artifacts became perfect.

1. bannerstone- an hourglass or butterfly shaped stone thought to be a decorative device for the tops of staffs; no two are exactly alike but most share roughly similar shapes

2. birdstone- small carved and ground stone figures of a bird or animal, usually about 2″ to 4″ long

5. chert- also called chalcedony, a type of quartz; similar to flint; can be knapped, or chipped, into various shapes

6. discoidal- a small cylinder of stone

7. flint-a type of quartz; very hard but fairly easily knapped, or chipped, into items with sharp edges such as arrowheads, knives, etc.

9. knapping- the process of knocking away small chips or flakes of a rock such as flint to shape it into a tool, weapon or decorative object; a knapper is one who makes replicas, reproductions and copies.

Enter the age of the professional flint knapper9. Some of these people are better at plying their trade than were the ancient flint knappers. Until recently, size was the only major problem. Today, quality raw flint is quarried for such purposes and modern knappers can turn out anything your heart desires. You can virtually choose the style of point and material of your preference, including Indiana and Kentucky hornstones, Missouri color, Illinois white, Arkansas novaculite, and multicolor Flint Ridge chalcedony4. In fact, 20" plus "Duck River" swords of Dover tan are also readily available if you are willing to share the price.

Let me share a typical example of costs. A fine quality St. Charles/Dovetail can be reproduced in a matter of 30 to 60 minutes by a skilled knapper. For 4" to 5" specimens, the maker will charge a dealer approximately $100. By the time the dealer adds a markup, this piece will be priced somewhere from $750 to $1000 and sold to an unfortunate collector. A well known family operation will make any type projectile for you in any quantity for about one third of the price of ancient and genuine artifacts.

I have enjoyed the good fortune of having examined tens of thousands of genuine artifacts as well as artifakes. If I can help one person from being wronged by a mistake, this has served its purpose. Thank you.

About the author: John Berner has served as editor of five professional journals, including: The Redskin, Artifacts, Prehistoric Artifacts of North America and Prehistoric America. He has also authored more than 100 professional articles on artifacts.

All photos in this article are the copyrighted property of American Antiquities Inc. 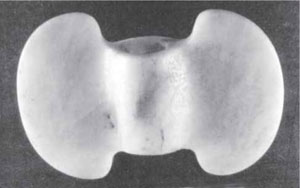 Fig. 1 Example of faked quartz bannerstone. The wings are rounded greater than authentic wings, the perforation is not tapered, a wheel polished finish. Sold at $1,500-$2,000. 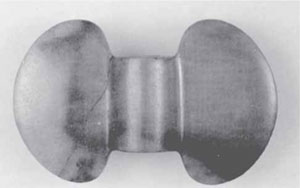 Fig. 3-A Cross section view of typical new bannerstone. Perforations, or center holes, in many faked bannerstones are made with a modern drill bit which produces cylindrical holes. 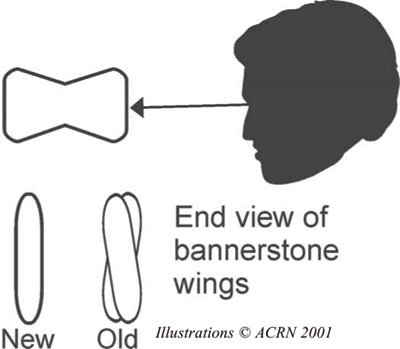 Fig. 4 Holding a bannerstone with one wing towards you and one wing pointing away, look at the end. Old wings were shaped one wing at a time by hand and wings in old bannerstones are virtually never in alignment. Both new wings are generally ground at the same time across a modern wheel and are very frequently in perfect alignment. 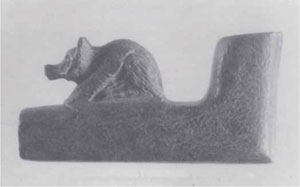 Fig. 5 New pipe in blackened soapstone. Numerous scratches to suggest age. Figure is assumed to be a raccoon. Found for $50 at many flea markets; sold to collectors for $200. 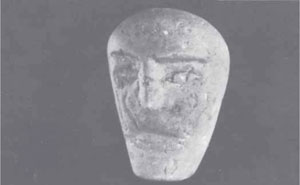 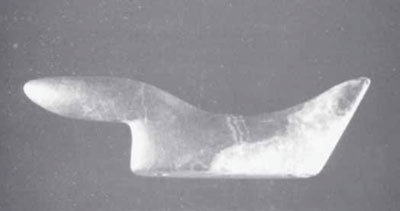 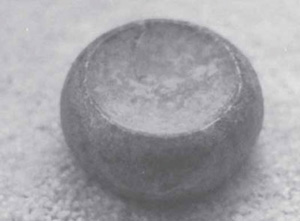 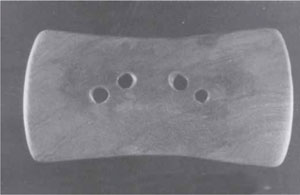 Fig. 9 New gorget, about 4″. Why are there four perforations (holes)? The vast majority of authentic gorgets have only one or two perforations. Sold $375. 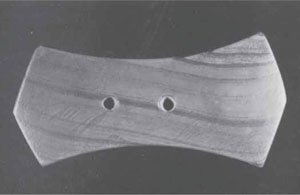 Fig. 10 Authentic gorget with the usual two perforations. Overall shape of authentic gorgets varies with the region and culture where they were made.

Fig. 12 New 4″ flint. Note the double notches in the side. There is no authentic old counterpart. But someone thought this shape might have a good future and made a few. Sold for $450 each. 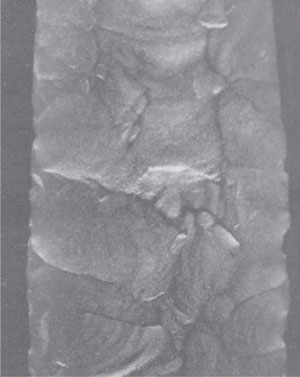 Fig. 13 Example of flint which has been sandblasted. After sandblasting, high points are ground down with wheels. This technique produces an ancient look and feel. 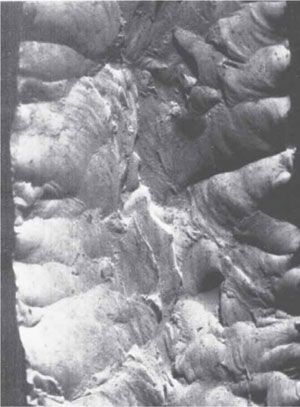 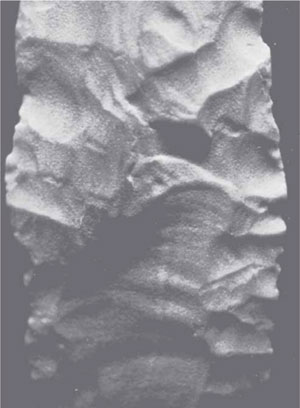 Fig. 15 Example of flint subjected to acid bath. Acid breaks down tiny flakes left from knapping and produces a weathered look and feel. This technique has been used extensively over the years. 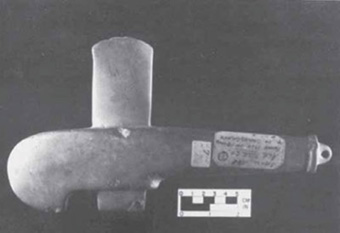 Fig. 16 Copy of a monolithic (one piece) axe. There are only 28 documented pieces but hundreds of replicas in the market. Sold $1175. 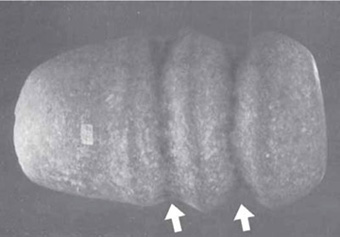 Fig. 17 The fakers didn't understand that a double bit ax (tapered on both ends) should have only one groove for the handle. The faker included two grooves. Sold $475-$800. 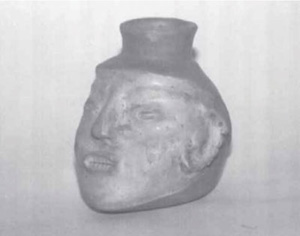 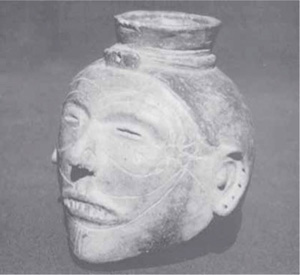