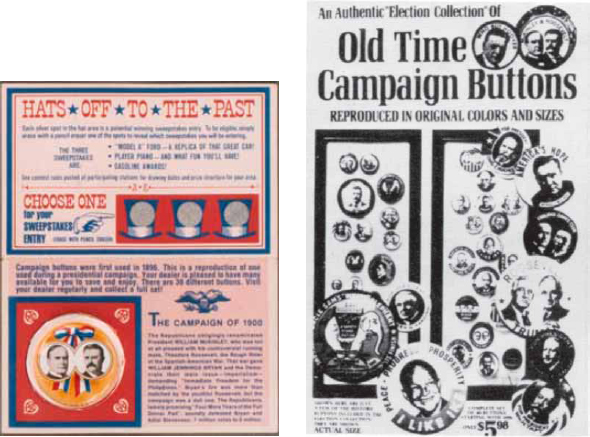 Buttons are the most reproduced of all political campaign collectibles. At times, the flood can seem overwhelming. Even experienced buyers can be fooled by sophisticated and deliberate fakes.

But if you're a general line antiques dealer, you're not likely to encounter an elaborately made forgery. You're much more likely to have problems with new buttons that have been mass produced. This is the type of button you would normally find at flea markets, antiques shows or auctions. This short article can't teach you to detect expertly made individual fakes but it can help you avoid the most common reproductions found in the general market.

Political buttons began as clothing buttons. They were solid discs of metal with images or slogans which were sewn on vests, coats and jackets. Sew-on buttons were used from George Washington's inauguration through the 1840's when political buttons began to be fastened by pins. By mid-19th century, pin-backed buttons carried candidates' portraits on ambrotypes and ferrotypes. These early photographic images were very popular but were easily scratched in normal handling. About 1886, button manufacturers began protecting images with a shell of transparent celluloid. This style button, called a celluloid or cello, was at its height of popularity from 1896 to 1924 and is considered the first 'modern' campaign button. The same technique was adapted in later years by substituting transparent acetate for celluloid. Thus the terms celluloid and cello have come to mean a type of button not the surface material of a button. And that's how we'll use the term in this article: a celluloid means a button made with a protective transparent shell over an image below (see illustrations of how buttons were made at the end of this article).

The other major type of campaign button is the lithograph or litho button which dates from the early 1920s. Lithos have the image or design printed directly on a sheet of metal. Buttons are then punched out of the sheet by a die. The advantage of the litho button was its one piece construction: it was quicker, easier and cheaper to make than the multi-piece cellos. The disadvantage is that the unprotected litho images scratch and chip easily. In this article, the term litho will mean a button with an image printed directly on its surface.

The majority of reproduced political buttons were never originally sold or represented as old. Most were used to promote various companies and products during presidential election years. Below is a list of original sources and production dates for the most commonly seen buttons.

United States Boraxo Company This set of new buttons was issued in 1972 to mark the company's 100th anniversary. (Figs. 1-2). The buttons were used as a product promotion with a mail order coupon offer. Two sets were available--one set of 19 presidential candidates who won and another set of 25 buttons with the 19 presidents and six famous presidential "losers." The sets were priced at $1 and $2.50 with various Boraxo product box tops and labels. Buttons range in size from 7/8 to 1 1/ 4" in diameter with the word "Reproduction" printed on the bottom curl, or edge.

American Oil Company The American Oil Company (AMOCO) also promoted a set of buttons in 1972 (Figs. 4-5). The AMOCO set included 38 lithographed buttons from 1 3/16" to 1" in diameter. Each button was originally marked "A-O-1972-X" (X being the number 1 through 38) on the bottom curl. This string of numbers is somewhat confusing and is frequently not understood to be a date.

Crackerbarrel In 1972, Crackerbarrel, a mail order firm, issued a set of 40 different lithographed buttons picturing candidates from 1896 through 1972. This set contains the same buttons as the Kimberly-Clark set described earlier but with five additional pieces including two from the 1972 campaign. Buttons from this set were originally marked on the back of each button with the words "Crackerbarrel/Farmingdale NY 11735" (see Fig. 8).

Proctor & Gamble A set of 38 celluloid buttons was distributed in 1976 as a promotion for Bold detergent. Each button has an outer rim of red, white and blue stripes and is marked "Reproduction by S & B Co. 1976" on the lower curl. Pins range from 1 3/4 to 3" in diameter. The colors and images are of particularly poor quality.

General A set of 13 lithographed buttons in various size pictures candidates from the 1916 through 1952 campaigns. Each button is marked "Japan" on the lower edge.

If new buttons always appeared as they were originally sold, identification would be easy-- just look for dates and company names (i.e. Crackerbarrel, Kleenex, etc.). Unfortunately, the marks in the back of a button or on the curl can be scratched out, painted over or covered with a new paper backing.

The following points for determining a button's authenticity are, at best, a general guide. A button is suspect if just one of these points is met. Your level of caution should match the asking price. The higher the price, the greater the caution.

1. Look for surface disturbances or change of color around the curl. This would indicate possible tampering with original printing. A black light can be helpful to catch repainting or erasing.

2. As a rule of thumb, most original backs were bare or were covered by a paper label. Be wary of backs which are painted, particularly if painted a cream or ivory color.

3. Many reproductions are lithographed copies of buttons that appeared originally as celluloid only. The easy way is to compare a suspect button to a book which describes the originals. Obviously, that isn't always possible or practical. Here are some general guidelines to help you separate lithographed buttons from celluloid buttons:

Is the image clear and sharp? New lithographs often look fuzzy and lack detail because they have been copied from an original or a copy of a copy. New lettering may be ragged. If there is a colored background, how has it been printed? Is it a solid mass of a single color or is the color formed from a distinct pattern of multi-colored dots? (see Figs. 13-14). Note: Use this test only with color backgrounds and color portraits. Simple black portraits on white backgrounds will appear nearly the same on new and old. Look at the overall design. Highly ornate graphic designs are not typical after 1920; plain designs are not usual before 1920.

4. Beware of any advertising on a button particularly of modern products or brands, i.e. cars, electrical appliances and modern convenience goods.

5. Look for signs of normal aging such as rust. Old rust (Fig. 11) is generally scattered in a random pattern and looks dark and dull. Artificially produced rust looks coppery red and is usually in large blotches.

6. Many reproductions are a different size than the original; compare the suspect to a known original.

7. The metal collars in old celluloids are generally narrower than the collars used on new celluloid style buttons. This is most helpful with buttons made before 1960. After 1960, all collars are generally wider.

8. Colors on reproduced buttons may not be the same as on originals. The arrangement of colors can be different, shades can vary or use different colors entirely.

Edmund Sullivan is a leading writer, lecturer and authority on American political antiques. This article was adapted from portions of the author's book Political Americana, 2nd ed. 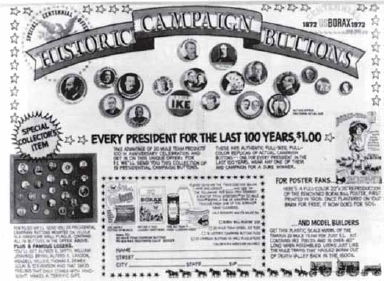 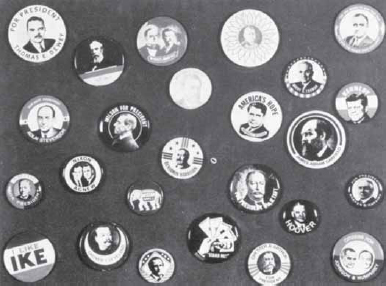 Fig. 2 These are the Boraxo buttons. The Grant, Cleveland, Harrison, Arthur and Garfield buttons are obvious reproductions. These candidates' campaigns were conducted before this type of button was invented in 1896. Each Boraxo button originally carried the word "Reproduction" on the edge. The word Reproduction may be overlooked, scratched out or painted over. 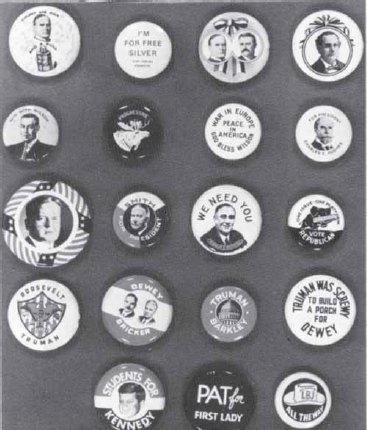 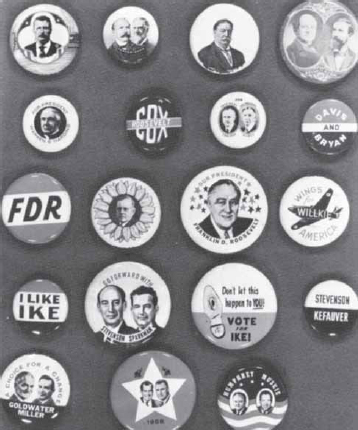 Figs. 4-5 Buttons from the American Oil Company set are shown in Figs. 4 & 5. All buttons shown are lithographs (with images printed directly on the metal button) but most of the originals they copy were celluloids (images protected under a transparent sheet). 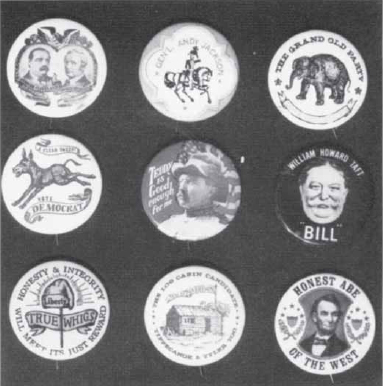 Fig. 6 These 2" celluloid-styled pins were sold by Art Fair in the late 1960s. They were originally marked "Art Fair, New York NY 10001." This printing can be removed so look for roughness or signs of repainting. 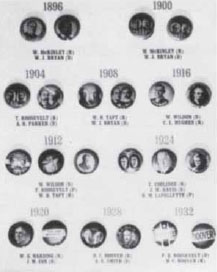 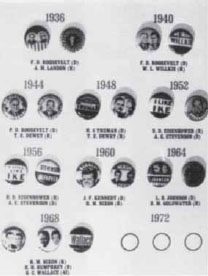 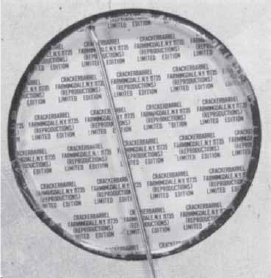 Fig. 8 Many reproductions like the Crackerbarrel button in Fig. 8 were originally marked. Look for paint overs or scratch outs. 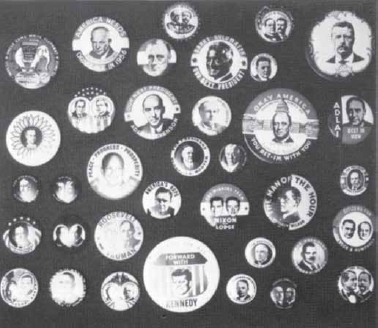 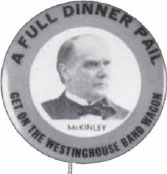 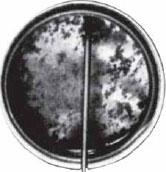 Figs. 10-11 Unlike the reproduction Westinghouse McKinley piece in Fig.10, modern brand names, modern products and corporate advertising do not appear on early presidential campaign buttons. Rust doesn't guarantee age but a random scattered pattern of dark colored rust spots as shown in Fig. 11 is a sign of normal aging in a genuine old button.

How Buttons are Made 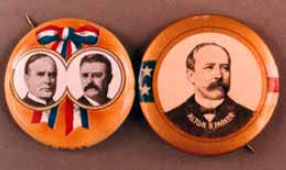 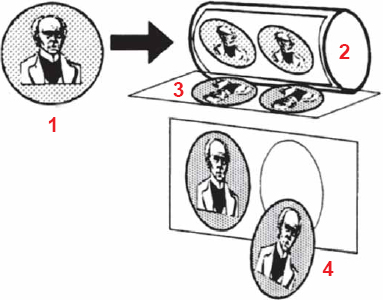 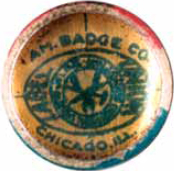 The back side of a one piece lithographed button. 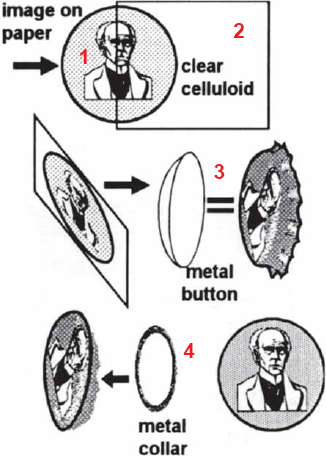 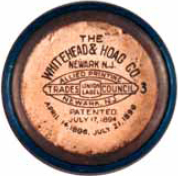 The back side of a multipiece celluloid button.