A German firm has used original pre-1940 molds to reproduce paper mache candy containers and novelty figures. Reproductions have handpainted details and some amount of hand finishing. The new containers and figures are retail priced $30-$75; comparable originals can sell for $150-$500+.

Before discussing how to separate old from new, lets review how paper mache is made. Not including homemade versions, there are two basic types of commercial paper mache. One is made from paper, or paper pulp, mixed with paste, sizing or other bonding agent. The second type is made from sheets of paper pasted and pressed together. Both types are formed into their final shapes by wetting and pressing into molds. When removed from the mold and allowed to dry, paper mache becomes hard and rigid. Commercial paper mache was widely used for cheap throwaway containers from ca. 1800 to the 1950s when it began to be replaced by plastic containers.

All the new paper mache in this article is made with the first process with a pulp and paste mixture being poured into a mold. There is no evidence of sheets or paper or bits of paper. Looking into the new containers, you'll see a perfectly white matte surface nearly identical to a bisque ceramic or pottery surface.

The harder, ceramic-like bodies and surfaces are the result of much stronger bonding agents being used in commercial paper machen today. Better bonding agents permit a more viscous, or more liquid, mixture which pours into molds quicker and easier which greatly speeds up production.

Since new pieces are made from old molds, new pieces have virtually the same level of molded detail so molded detail and shape are not reliable tests of age. Most new pieces, and many old ones, are not marked so marks are also unreliable. Besides, it is very easy to rubber stamp old-appearing marks such as Germany on new figures (Fig. 4). The best way to separate new from old is to study the details of construction.

Perhaps the easiest clue to detect is the use of spray paint on new containers. The telltale sign of spray painting is a gradual fading, or feathering, of paint. On our examples this was best seen under and around the removable heads and lids. The paint in Fig. 5, for example, fades from 100% paint coverage under the head to zero coverage at the end of the cardboard connector. New connectors almost always have at least some paint; old connectors are rarely deliberately painted.

Although large areas of new figures are spray painted, some details on new figures are hand brushed. This typically includes facial features like whiskers, eyes, etc., and other small details such as buttons on clothing. But spray painting is a more important clue to recent manufacture than hand brushed details.

Another major difference between new and old containers is the use of machine-made cardboard tubes to connect lids with bodies. The new tubes are constructed of spiral-wrapped cardboard which leaves a spiral seam (Fig. 5). Virtually all old connectors are one or more layers of hand-rolled stiff paper or light cardboard. Old hand-rolled connectors have straight seams (Figs. 8-9) not spiral seams. Old connectors are also almost always shorter than new connectors.

Another useful test is to examine a suspected piece of paper mache under long wave black light. Many new paints, especially whites and reds, tend to fluoresce brightly under black light. 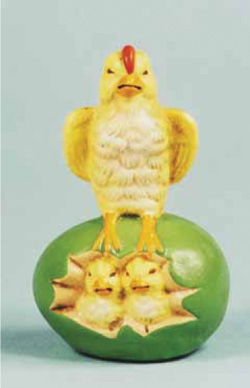 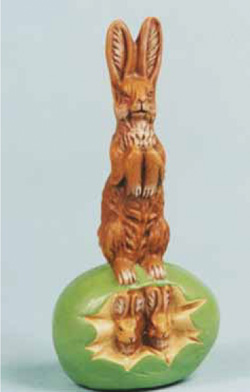 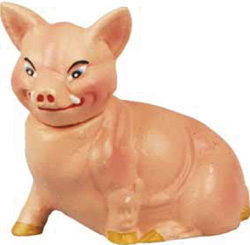 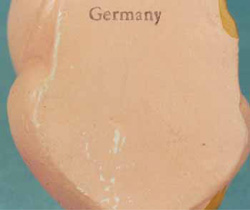 Fig. 4 Fake "Germany" added with rubber stamp to base of new pig. Base rubbed with sandpaper to create artificial wear. 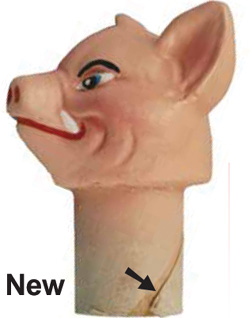 Figs. 5-6 Most new head-to-body connectors are much longer than originals, most extending one-inch or more from the figure. Almost all the new connectors are machine-made spiral wrapped cardboard tubes which have spiral seams (arrow). New connectors are also a good place to check for spray painting. The spray paint fades from 100% paint under the head to no paint at the end of connector. 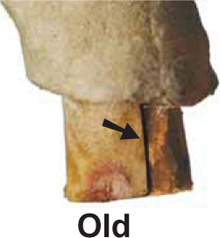 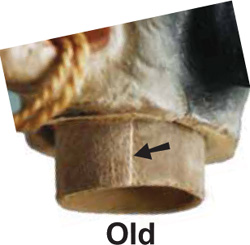 Figs. 7-8 Two typical old head-to-body connectors. Connectors on the vast majority of vintage papier-mâché containers usually extend no more than one-half inch beyond the figure; rarely three-quarters of an inch or more. Almost all old connectors were formed by hand-rolling one or more sheets of stiff paper which leaves a straight seam (arrows), not a spiral seam. Most old connectors were never painted except for accidental smudges. 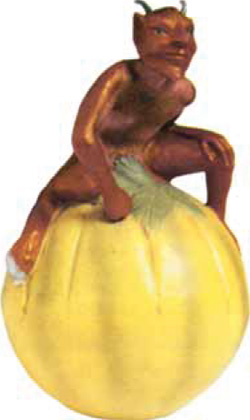 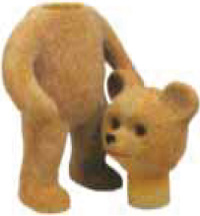 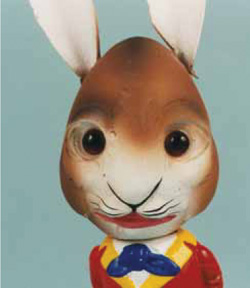 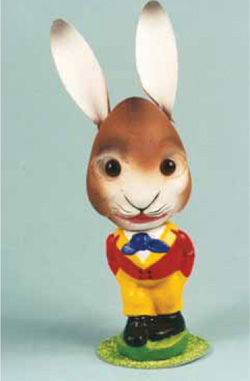