At a New York auction, an original Pairpoint Puffy Rose Bouquet lamp sold for $15,000. Reproductions of the Rose Bouquet plus three other styles are now being imported from China. The other styles include hummingbird, butterfly and floral shades. Originals of these lamps can bring from a starting average of $3,500 for florals to $4,500-$7,500 for butterflies and hummingbirds. The Chinese reproductions can wholesale for an average of $150 each. Available since 1998, new Puffy shades are frequently confused with old and commonly paired up with genuinely old bases. This article will compare the differences in construction between the new reproductions and authentic originals.

The Pairpoint Corporation of New Bedford, Massachusetts created some of the most highly sought after reverse painted antique lamps. The business was formed in an 1894 merger with the Mount Washington Glass Company.

Glass lamps with handpainted decorations on the inside or "reverse" of the shade were produced from around 1907 to the beginning of the Depression ca. 1929. Pairpoint's reverse lamps were designed for a luxury market selling for up to $125 each at the time of production.

Decorations consisted of elaborate landscapes, birds, butterflies, fruits and flowers. In their book Pairpoint Lamps, authors Ed and Sheila Malakoff equate the artistic work on most medium sized shades to that of a 20" x 40" painting on canvas.

About half of all Pairpoint reverse painted lamp styles had blown out or so-called "Puffy" shades. That is to say the surface of the shades was raised in three dimensional designs as opposed to a flat surface. The blanks were made by blowing them in a mold. Molds were specially treated with beeswax to prevent any mold seams from showing in the final glass blank.

Puffy shades are identified by specific shape names and decoration names. Examples of shade shapes are Oxford, Devonshire and Chestnut. Painted decorations on the shapes varies. Hummingbirds and roses is a decorative pattern, for example, that can appear on either Stratford or Devonshire shade shapes.

Original Puffy shades exist in three basic categories: 1) full size for table lamps, typically 10" to 14" in diameter, 2) boudoir or miniature size, typically 5"-8" diameter, and, 3) the so-called "candle" or "candle stick" size, about 3" diameter. This last group is so named because the bases are shaped like slightly oversized candlesticks.

Louis St. Aubin, Jr., who compiled Pairpoint Lamps (see listing at the end of this article) has reported seeing a number of the new Puffy lamps already offered through Internet auctions. Due to the price and rarity of originals, many dealers and collectors have never had the chance to inspect or handle authentic Puffies. To those unfamiliar with originals, reproductions seen on the Internet, at "estate" sales and auctions may look virtually identical to lamps shown in Pairpoint reference books. However, a hands-on inspection or asking the right questions over the phone can quickly establish a shade's true age. The most important features to examine are overall finish, paint, and quality followed by glass thickness, hardware and bases.

Original Puffy shades were first acid finished (frosted) before decorating. Original paint was then applied to the reverse side. Paintings were fired in a oven (kiln) one or more times to make them permanent. These original manufacturing techniques establish two important characteristics of authentic lamps. The first, paint on an original Puffy shade is extremely hard and permanent; original paint can virtually never be dented or chipped off with a fingernail. Second, any undecorated surface on both sides of an original Puffy appear as frosted glass. The entire shade was frosted before any decoration was ever applied.

Paint on new Puffy shades is not fired. It is a relatively soft non-fired paint, probably an acrylic. In most cases the new paint can be creased or dented with a fingernail. The majority of new Puffy shades are frosted on the outside only. Reverse sides of new shades are almost always entirely covered with white paint. Both decorated areas and undecorated areas of the reverse surface are covered over. The white paint is necessary to protect the soft non-fired decorations from damage. This coating of white paint is one of the most obvious indications of a new shade.

Not so with the reproductions. Large, wide, prominent brush marks are obvious in all the shades. Larger brushes apply more paint and are simply a means to increasing production. Look closely and you'll see that many leaves and flower petals, for example, are the product of one single stroke of a wide brush. The brush marks are preserved as the new paint is air dried only.

Large flaws like the paint run in Fig. 5, are also typical of the reproductions. Bubbled paint, imperfections in the glass blanks and crudely ground shade rims are also common in the reproductions. Paint problems are virtually never found in originals. Blanks used for authentic shades are usually flawless.

Original full sized Puffy shades, 10-12 diameter, are fairly thick, usually approaching about ¼" at the rim. Smooth surfaced shades get much of their strength from their essentially arch shape and could safely be made from one-eighth inch thick glass. The irregularly shaped blown out Puffies needed to be thicker to produce the same strength. All the new puffy shades are approximately one-eighth of an inch or less in thickness at the rim's edge.

There were two broad types of bottom rims on original Puffy shades. An irregularly shaped rim usually supported by metal arms (spider) and a flat bottomed rim usually supported in a circular raised metal rim. Of those original shades with a flat rim, the vast majority have a curved fitter rim (Fig. 10). Generally, you should be wary if a flat bottomed Puffy shade does not have this curved rim.

There are lots of genuine old bases and bits of hardware available to "marry up" with new shades. Anyone dishonest enough to deliberately misrepresent a new Puffy for old will probably have the new shade on an old base. Here are a few specific features to inspect to be sure you are getting original hardware.

If the shade is supported by a spider (armed bracket), how is it attached to the lamp? New spiders that come with the new shades are notched (Fig. 12). This way they can be attached to a new lamp simply by sliding them between the socket and lamp base. The lamp does not have to be taken apart. Virtually all old spiders (and even most new) have a hole in their centers. This requires that the socket be removed from the lamp base to attach the spider.

The majority of original Pairpoint Puffy shades supported by spiders had irregular outer edges. That is to say the edges of the shade followed the molded figural designs. None of the four reproduction puffies in this article have irregular edges; all have a squared edge. Generally, most, but not all, original Puffy shades with regular edges were supported by circular frames with raised metal rims like on Fig. 2. Whether a spider or circular frame, the finish of the shade holder should match the finish of the base.

The new bases that come with the new shades are crude pot metal with low quality metallic finishes. Most new bases are discarded and the new shades matched up with genuinely old bases, either by Pairpoint or other manufacturers.

How important are marks?

Not all Pairpoint authorities and dealers agree on exactly how many shades were marked. The Malakoffs contend, "Every Pairpoint shade that left the factory was stamped..." Louis St. Aubin suggests "..the shades were not always signed." And Leonard Padgett in Pairpoint Glass writes, "...many of the shades are also marked..."

There is no disagreement, however, on how original Pairpoint glass shades are marked. If they are marked, it is with a dark ink applied with a rubber stamp. The mark may read in one of the following ways, "The Pairpoint Corp'n", "Patent Pending", "Patent Applied For". Puffy shades are sometimes found marked "Patented July 9, 1907" also rubber stamped.

Most everyone does agree that virtually all original bases were marked. A number of original parts--such as spiders, metal rims, washers and other pieces--were often but not always--also marked. The most common mark in metal bases was the capital letter P inside a diamond. This mark was die stamped below the surface of the metal.

No marks originally appear on the reproduction Puffy shades or the new bases they are sold with. This doesn't mean, however, that enterprising forgers won't add marks before reselling new pieces as old. Be suspicious of blotchy, smeared or overly large rubber stamp marks. Original rubber stamped marks are usually no more than 1/8" to 3/16" high at the most. Die stamped forgeries in metal bases and hardware have been seen in the marketplace for at least five years.

If you carefully compare measurements of new shades to originals, you'll find they don't match. The original Pairpoint Stratford shape shade, the shade most commonly used for the hummingbird and roses decoration, is 14" in diameter (Fig. 4). The reproduction Stratford-style with hummingbird is only 12" in diameter.

We aren't going to list size differences between old and new. Rather than memorize confusing dimensions for each shade, it's easier to use the general guidelines on paint, finish, mold seams, etc. already discussed.

Don't make the mistake of judging age or authenticity by using one single test. If you use just one test, there are some exceptions that may trip you up. The new floral shade, for example, is the one new reverse painted shade that is not painted white on the inside. But it fails all the other tests: it has a coarsely ground rim, wide crude brush strokes and no curl to the fitter rim. All the reproduction shades fail at least three of the tests described in this article. Use all the tests before forming a judgement on age.

You're probably better off ignoring marks and signatures. Rubber stamp marks on shades and die stamped marks on hardware and bases are easily forged. Concentrate on comparing construction and decorating techniques to separate new from old. Be suspicious of mismatched finishes on metal surfaces. Compare model numbers on bases to known originals 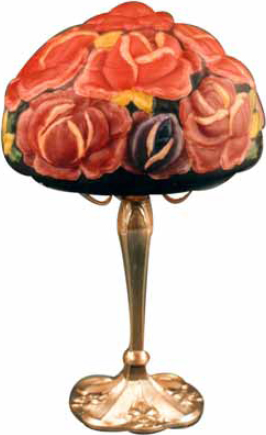 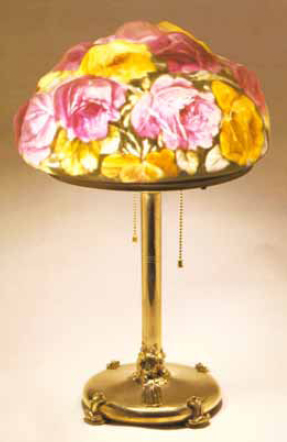 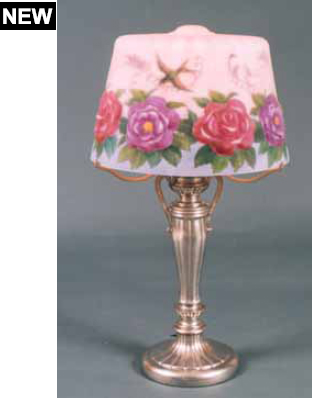 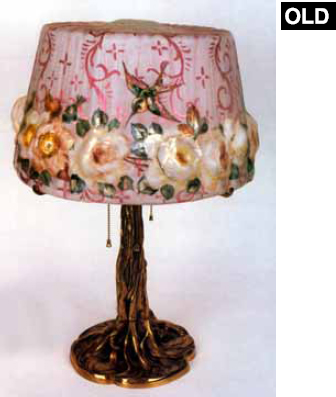 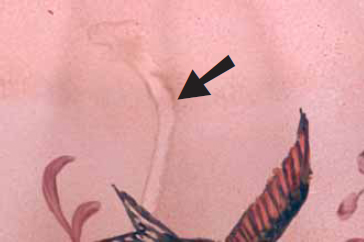 Fig. 5 Flaws, like this large paint drip, are common in the reproductions but virtually never found in originals. 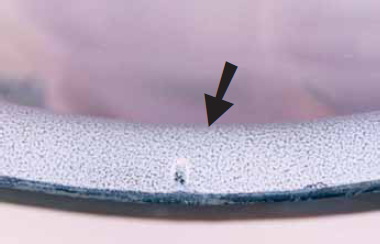 Fig. 6 The insides of new shades are painted white. This close up shows the white paint extending back from the edge. 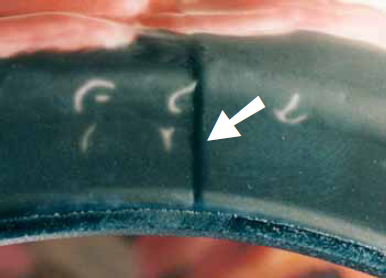 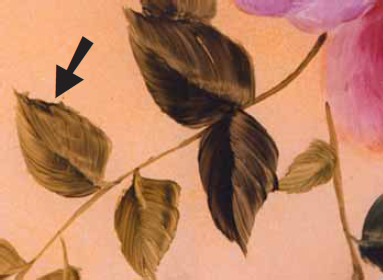 Old shades have a curved fitting rim, Fig. 10. Except for the new Rose Bouquet, most new shades do not have this feature. 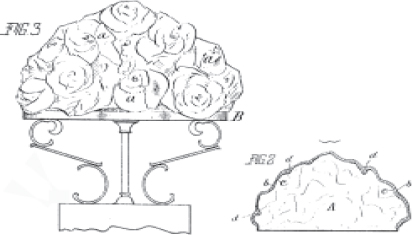 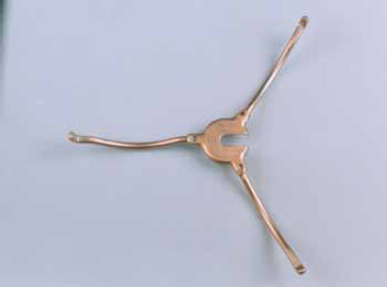 Fig. 12 This type of spider (shade holder) is supplied with the new shades. It is notched (arrow); original spiders have a hole in the center. 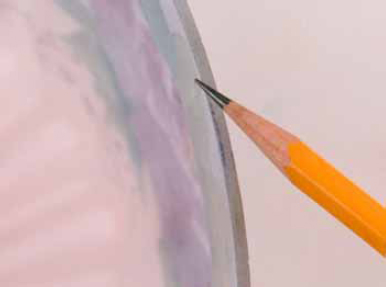 Fig. 13 Reproduction Puffy shades are fairly thin, one-eighth of inch thick or less. The majority of originals are thicker, usually about one quarter of an inch thick. 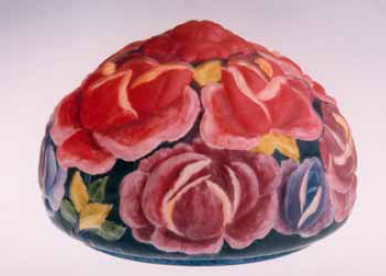 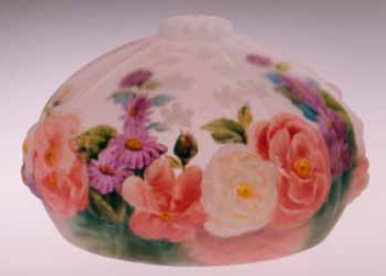 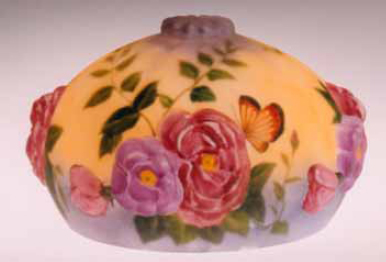