One of the reproductions offered by Lowe's is the Puffy Rose, a style that if original sells for $10,000 to $15,000. First seen in late 1997, reproductions of Puffy Pairpoint lamps have until now been confined to relatively few lamp wholesalers and reproduction importers.

Virtually every new Puffy shade has the inside of the shade painted white. This is to protect the reverse painted decoration. Original shades were kiln fired and the paint is permanently fixed to the glass. The other major clue is that original shades never have a mold seam. So far, all the new shades examined have a prominent mold seam. New shades almost always have rather obvious flaws in the glass such as large bubbles and problems with the paint such as runs and smears. 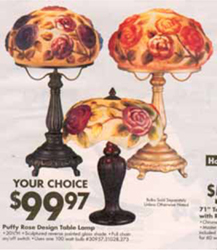 Copies of Pairpoint lamps as shown in a Lowe's advertising circular.