Examples and background by Jim Fisher Photos by ACRN

Old Sleepy Eye collectibles are primarily premiums, advertising items and promotional pieces from the Sleepy Eye Milling Company of Sleepy Eye, Minnesota. The town's name and the company's distinctive trademark were taken from a Sioux Indian Chief, Old Sleepy Eye. Founded in 1883, the company continued in operation till 1921. One of their best known premiums is a series of blue and white pottery pitchers.

The blue and white pitchers were the second major ceramic line used by Sleepy Eye Milling. The first line was a blue and gray (Flemish) stoneware made from about 1899 to 1905 by the Weir Pottery Company of Monmouth, Illinois. The second blue and white pottery series was made from about 1906 up till 1937. These later pieces were made by the Western Stoneware Company of Monmouth, Illinois.

Original pitchers were made in five sizes. Here are the original sizes by volume followed by the height of the pitcher measured from the lip to the base: a 1/2 pint-4"; pint-5 1/4"; quart-6 1/2"; two quart-8"; and, gallon-9". It is common for the old pitchers to vary slightly in size so not all old pitchers will be exactly the heights listed. Some new pitchers are close in size to the originals, others are not. The new 1/2 pint pitcher (Fig. 3) is nearly identical in size to the old. New pitchers from a different source (Fig. 5) have been sold in three sizes: 9", 7 5/8" and 6 1/4".

Original pitchers were made as two pieces. First the bowl or body of the pitcher was molded. Then the handle, which was molded separately, was applied to the body. This two-step operation left the inside of original pitchers smooth. Reproduction pitchers, both body and handle, are cast to speed up production. Casting produces a hollow handle. This leaves a "dimple" or hole on the inside of the pitcher where the hollow handle meets the body (Fig. 1). Another characteristic of the new pitchers is a raised ridge running around the lip. Old pitchers have smooth lips (Fig. 2). New pitchers are also much lighter in weight than the originals.

On all the new pitchers, the decoration is the same on the front. The chief's head is in the center with a tree to the left of the bust and two teepees to the right of the head, between the head and handle (Fig. 3, left). No original pitchers have two teepees between the chief's head and the handle. Original pitchers had either one teepee or one tree between the head and handle. The old pitcher in Fig. 3 has one tree. Also on the reverse of old pitchers is a crouching Indian. This figure is frequently hidden by the glaze and may be difficult to find. Design details for all 5 original pitchers are listed in the chart (Fig. 12).

In addition to the new pitchers, there are other new blue and white pottery pieces including a toothpick holder (Fig. 6), salt and pepper shakers and a sugar bowl. There never were any old salt and peppers or toothpick holders in original Old Sleepy Eye pottery. Those three shapes are all fantasy items and exist only as modern reproductions. There is, however, an old sugar bowl. The new sugar bowl (Fig. 7) has a pronounced curve to the base; the original sugar bowl (Fig. 8) is nearly straight-sided.

There's little doubt that the new pieces are deliberately copied from the original styles. The boxes the reproductions arrive in from the reproduction wholesaler are clearly labeled "Sleepy Eye" pitcher (Fig. 9). 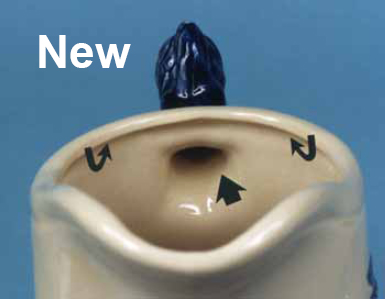 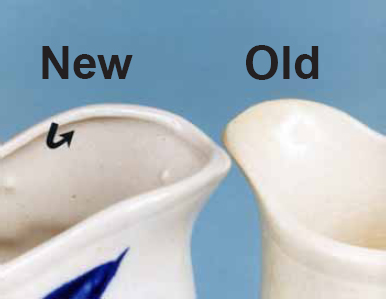 Fig. 2 On many new pitchers, left, a ridge runs along the inside of the lip. Rims of old pitchers, right, are smooth around the lip. 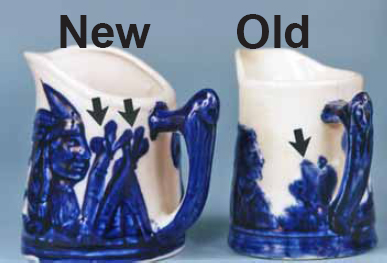 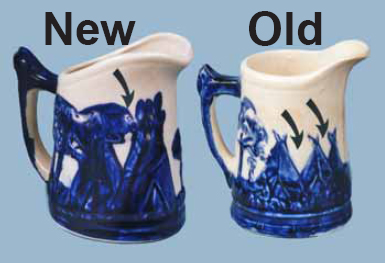 Fig. 4 All new pitchers have three teepees on the back, left above. The top of the third new tepee is partially covered by the tree branch, arrow. Old pitchers, above right, have either two or three teepees. There are distinct gaps between the tops of the teepees on original pitchers. 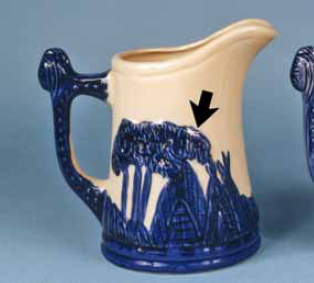 Fig. 5 Another new pitcher by a different source than the pitchers in Figs. 3-4 also has three teepees on the back without any gaps between the tops of teepees. 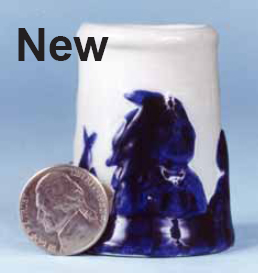 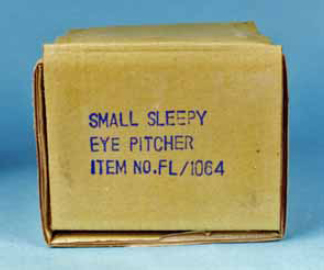 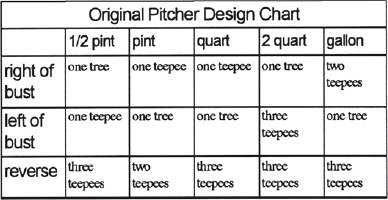 Fig. 12 This chart lists design features on original blue and white pottery pitchers. Use it as a check list to detect the reproductions.