For quite some time now, there has been a growing controversy within the hobby because of the appearance of jars which have been irradiated to "color enhance" the glass. That is, these jars are ARTIFICIALLY TREATED to obtain their color. Usually seen in an extremely dark purple (when manganese was used as a decolorizer in the original glass batch) and a smoky, brownish amber color, (when Selenium was used as a decolorizer) these jars are usually just common old jars which someone has treated to increase the price. The jars are indeed old, but they were originally just clear, common examples. Some may argue that this process is NOT artificial, because the turning of the glass would happen over years of time if exposed to the sun. This is NOT true, because exposure to the sun does not contain the energy needed to produce these ultra dark colors of irradiated examples.

Many years ago, it was discovered that SOME clear glass jars would turn a light amethyst when exposed to the rays of the sun, such as on a roof top. Then it was discovered one could speed up this process of sun induced color by using a certain type of fluorescent tube light called a germicidal lamp. These lamps, which emitted high doses of the UV rays, caused the manganese in the glass to react and absorb all the visible light in the spectrum except violet. Thus, you see a shade of purple. But jars treated in this manner will not be the EXTREMELY dark examples often seen today. This requires much more intense radiation or exposure to UV or gamma rays than these germicidal lamps produce. And the resulting glass is a much darker shade of purple when nuked as opposed to the purpling boxes used in the 70s and 80s.

Today, there are several methods of irradiating, or "nuking" glass as we call it in the hobby. Without getting really specific, one method is in hospital sterilizing equipment. Another form of nuking (and I highly suspect this is what is done to most of the jars we commonly see today) involves running the jars through a sterilization chamber at meat processing facilities, which often use cobalt 60 to expose the meats to enough radiation to kill off most bacterias. According to one website I researched, as much radiation as the equivalent of 3,000,000 chest xrays! It's a wonder the jars don't come out actually glowing! And there are other sources of irradiation, which are pure gamma sources using ionized radiation which leave no contamination and are not radioactive. The results appear to be the same...either dark purple or mud brown depending upon the chemicals used in the glass batch itself.

Another point to look at when considering whether a jar has been nuked or not can be the lid. If the jar has a glass lid or insert that matches in color exactly, it is a good indication both were treated at the same time. Most glass lids were made totally independent of their containers, usually out of a totally different glass batch. So if the glass lid is the same color exactly as the jar, they very well might have been nuked together.

What is truly sad about the practice of nuking jars other than deception, is that more can be done at any time. So when someone pays a high price for a jar that is this nice dark purple, a hundred or even a thousand more could be colored this way in a matter of minutes.

To be sure, the dark purple jars are very attractive. And a collection of them would simply knock your socks off because the intensity of color. And, they ARE old jars, usually pre-1915 and earlier. The brownish amber jars contained Selenium, and most of them appear after 1915. There are examples though of glass made into the 1920s that contains manganese and will turn purple. Usually this is because those glass batches contained old cullet (broken and discarded glass) which contained manganese. But irrespective of their color, either dark purple or a brownish amber, they were just common, clear jars that someone exposed to ultra high doses of irradiation to change their color in order to sell them on the market to unknowing buyers.

There are also known examples of other colors, which were produced by varying processes involving radiation, but these are quite rare. Once it was discovered what could be done and how, the process was squelched for several obvious reasons. It was also discovered that often this nuking process can be reversed with application of high heat to the item, such as placing in an oven for a period of time. This has been disputed by one seller of irradiated glass, but I would simply suggest that he try it. It HAS been done by other folks. I have also been told that sometimes these items will lighten simply with age, but I have not seen enough examples for a long enough period of time to know that for 100% certain.

So in summation, when you see one of the ultra dark purple jars, or the brownish amber jars for sale, with almost 99% certainty, you can believe these were color enhanced by "nuking" them. There ARE a few known authentic examples of glass that have turned extremely dark purple via natural sunlight, and even then, I'm not sure they approach the ultra dark purple we see in the nuked jars of today. But the buyer should be cautious whenever one of these dark purple or brownish amber jars is offered for sale...it most likely has been nuked at some time, this is not a natural made color.

If you don't know, don't be afraid to ask questions! There are many collectors and dealers out there that will give you an honest answer regarding these jars. So, should one buy a jar that has been irradiated? Well, that's your own personal preference. I've had a couple of them myself. And they ARE quite striking, or at least the purple ones are. But I, and many of the knowledgeable collectors won't pay a "premium" for a jar that is still a regular clear jar but has simply rolled up a conveyor belt with hundreds of others in a short process. And there likely will be thousands more coming...maybe millions! In my view, it is no different than painting a clear jar red and calling it ruby glass.

Information for this articles was contributed by many sources; advanced collectors, a worker at a nuclear facility, several government as well as private websites and even people that have had these items done for them. Among them all, the consensus is the same: CAVEAT EMPTOR! Let the buyer beware! To those that have helped with this compilation, I and the ethics of our hobby, thank you!

About the author: Bob Clay worked for Ball glass for 20 years. He has collected fruit jars for over 30 years and written extensively on the subject. Links to many of Bob's other articles can be found on his eBay About ME page: http://members.ebay.com/aboutme/bobclay/. 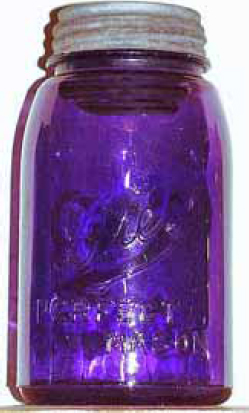 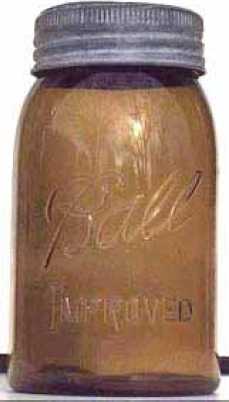 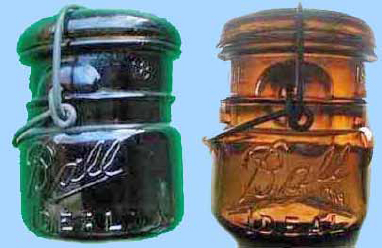 Fig. 3 Examples of Ball Ideal pint jars that have been color enhanced by irradiation. Notice that the color of the glass lids in both Figs. 3 and 4 have been affected by the irradiation. 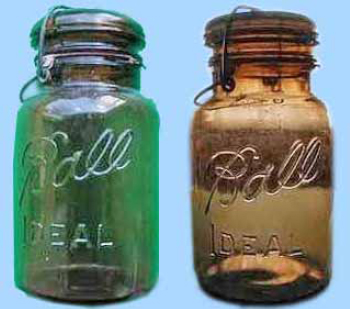 Fig. 4 Examples of Ball Ideal quart jars that have been color enhanced by irradiation. 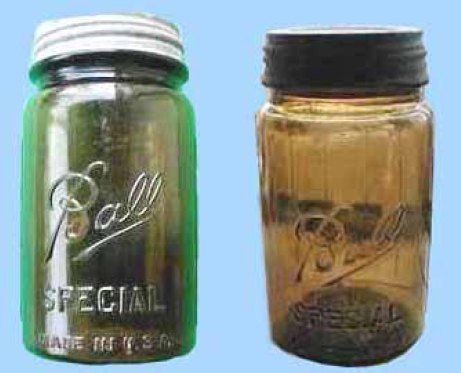 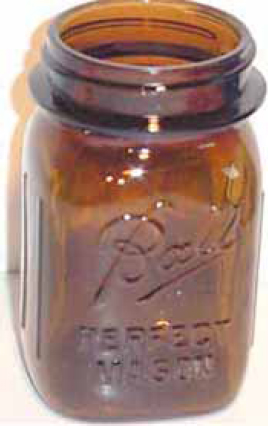 Fig. 6 Some colors created by irradiation, like this amber Perfect Mason example, can be fairly close to colors found in authentic vintage glass.