Imitation Nippon has been made since the late 1970s. There are now more than 50 known patterns applied to ceramics which have fake Nippon marks. At first, patterns on reproductions looked more like German and English Victorian patterns with large flowers than patterns used on authentic 1891-1921 Nippon. Gradually, though, patterns on the reproductions have become more like originals and many are nearly exact copies of vintage patterns. Gold trim on many new pieces now features raised gold and enamel jewels that closely resemble the quality of many pre-1921 originals.

How do you tell old from new? Perhaps one way is to use this photo guide with you when you shop for a side by side comparison. Specific tips and hints are discussed.

How to Use This Guide:

The bold words are pattern names (if any) used by reproduction wholesalers. Following the pattern name is a list of known shapes in that particular pattern. Patterns shown could easily be found on shapes not listed and on future shapes. Various new Nippon marks appear on these pieces. 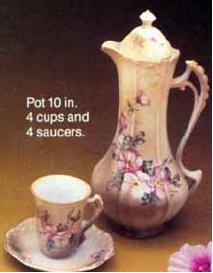 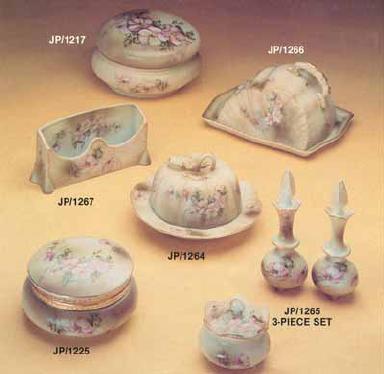 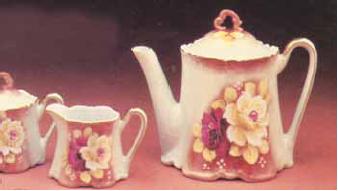 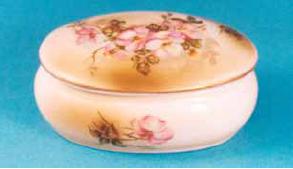 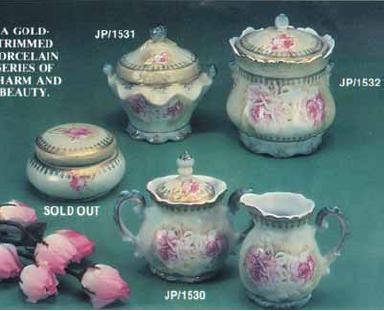 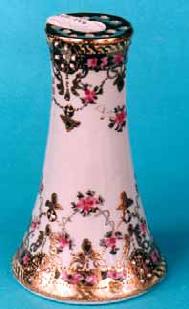 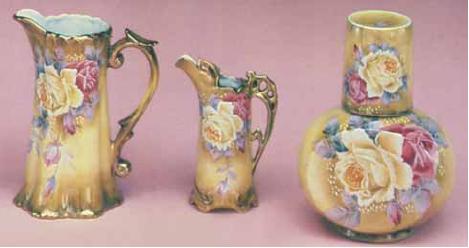 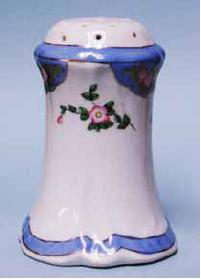 A simple rose with stems and leaves. Shown here on a hatpin holder. 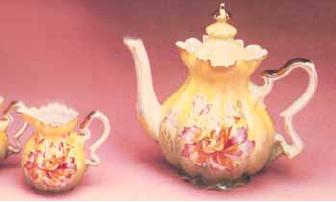 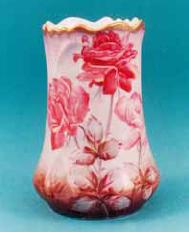 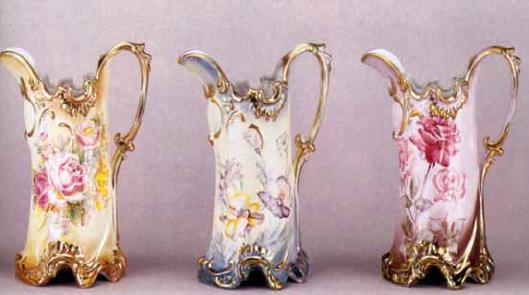 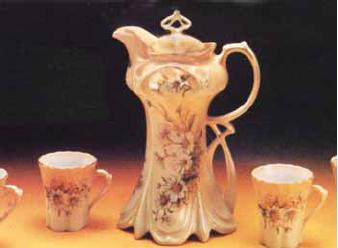 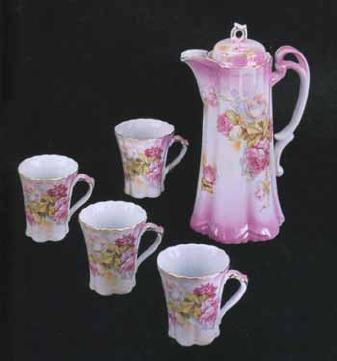 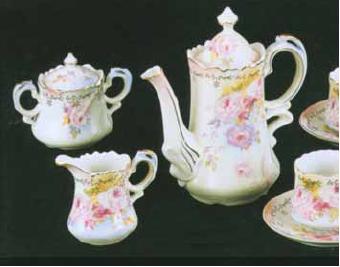 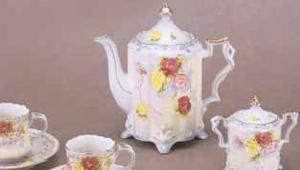 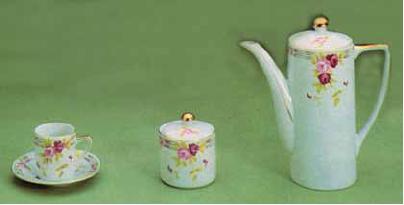 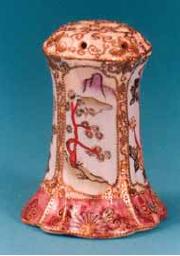 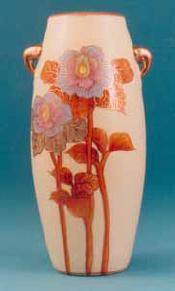 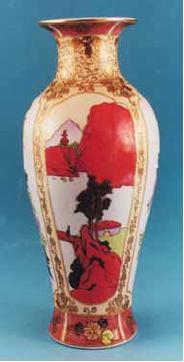 Another type of mountain scene pattern set in panels outlined by raised gold. This vase 12 inches, also on other shapes. 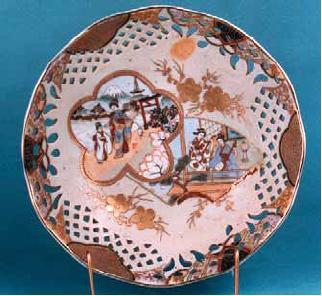 This shaving mug blank appears with various decorations including Chantilly Rose and Wildflower . 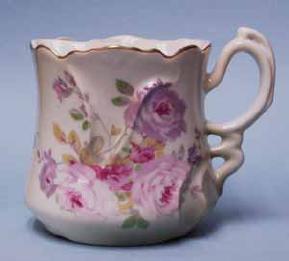 Detail of new shaving mug blank, side view above. Top view of new mug blank below. 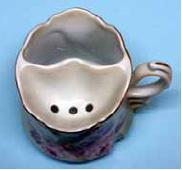 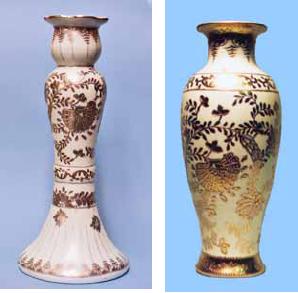 A number of new pieces of black memoribilia are marked Nippon. The mammy toothpick holder, above, and the child on alligator are just two examples. Both pieces are marked Nippon in block letters. 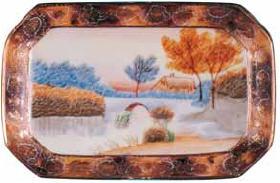 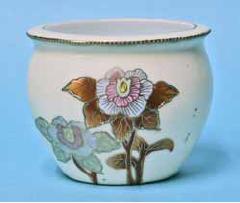 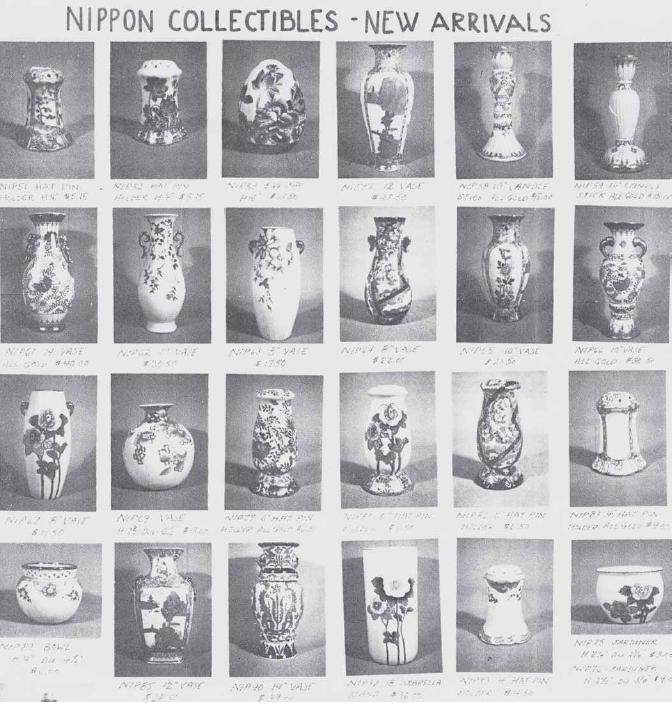 Black and white printed brochure from a reproduction wholesaler promoting new porcelain marked Nippon. These new pieces were introduced in 1995. A variety of new marks appear on these items including the M and wreath, rising sun, maple leaf and others.

The Problem with Marks:

Some marks on some reproductions are now identical to original marks. This means you can never use marks alone as your only test of age. Reproduction wholesalers are constantly improving and upgrading the new marks (see wreath marks below). Other Nippon marks known to be reproduced are shown below. Others probably exist. 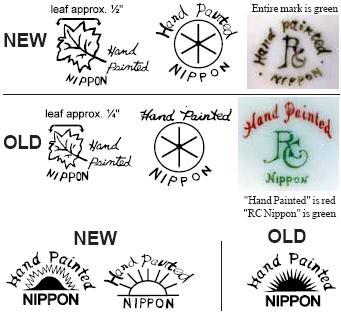 How do you tell if it's old?

Marks and patterns are no longer the reliable tests of age they once were. As fake marks become better and more original patterns are copied, buyers will need other ways to judge age and authenticity. Here are some of the ways to guard against buying reproduction Nippon.

1. Check the glaze. The high gloss glaze on most, but not all, new pieces is noticeably rougher and not as smooth as originals. Also inspect the insides of pieces. Many new pieces are not entirely glazed on the inside; originals, of course, are completely glazed.

2. Compare the thickness. Most new pieces are thicker than old, sometimes twice or more as thick.

3. Test the weight. New pieces are generally much heavier than old. This is due to not only their thicker construction but a difference in the raw materials.

4. Look at the gold trim. New gold is generally one of two types: A) a copper-colored gold that usually has lots of bumps and loose particles, or B), a brassy yellow gold with a highly reflective almost mirror-like finish. Original gold never has loose debris suspended in it and is virtually never highly reflective. If you see your reflection in the gold, it is almost certainly new.

5. Don't rely on one test. Never base your decision of age on one test alone. Use several cross checks. Most reproductions fail several tests once you begin to look.

A reproduction wholesaler is now selling ceramic items with a mark that is virtually identical to original marks found on ca. 1891-1921 Nippon wares. The mark is the so called green wreath mark shown in Fig. 2. The new mark, Fig. 1., is the same size and color as the original.