New glass rolling pins identical in shape to those produced by McKee Glass during the Depression era, were made in the original McKee mold by Fenton Art Glass.

The first new rolling pins were made in late 2000. They were produced in jadite, an opaque green glass, and in opaque pink glass for the Martha Stewart mail order catalog, Martha By Mail. Another version of the new rolling pin was made in vaseline glass for a Midwestern glass wholesaler which was selling them for $50 each.

The original jadite McKee double-ring rolling pin sells for $1000 and up. The jadite version from Stewart sells for $40. McKee never made this model rolling pin in vaseline glass as part of general production.

James Measell, Associate Historian at Fenton Art Glass, confirmed Fenton owns the McKee mold and has been making the rolling pins for private customers. "The original McKee [double-ringed rolling pin] mold was purchased directly from McKee in the 1960s," said Measell. "All the new pieces from this mold have been for private customers including Martha Stewart. No pieces from this mold in any color are being sold through the regular Fenton Art Glass line."

Despite examining several new Stewart jadite pins very carefully under magnification, no maker's marks could be found. But when the vaseline pin came out in summer 2002, it was openly advertised as made by Fenton in the original 1930s McKee mold.

After talking with Measell, we went back and examined our sample pins for a second and third time. This time, using special lighting, we did find the Fenton trademark, the word Fenton in an oval. Marks appear on the end with the cap, just above the curve of the shoulder going towards the end of the pin. Marks on both types of pins, the jadite and vaseline, were both extremely faint and blurred. This was especially true for the mark on the jadite pin.

The jadite sample had been in our possession for over a year and we didn't know it was marked. We examined it several times with a magnifying glass when it was first purchased, showed it to depression glass specialists and other experienced dealers and not one person ever found the mark.

The marks in the photographs on the opposite page were highlighted and accented by special studio lighting to bring out detail. Under ordinary room lighting the marks are far less distinct than they appear in the photos. The lighting in many auditoriums, auction buildings, antique malls and flea markets is often not the best. If you find one of these pins and seriously think it might be old, we suggest using a flashlight or other strong single light source that can be held close to the pin's surface. Shine the light at a right angle to the piece and carefully check for a Fenton mark. Keep in mind, though, that future pieces, and maybe some pieces already made, from this mold may not always be marked; it's up to the customer whether the private work is marked.

Fenton began permanently marking most of its products in 1974 with "Fenton" inside an oval. Beginning in 1980, a single digit representing the decade of production was added to the oval. The digit "8" for example, represents 1980-1989.

Fenton's policy of permanently marking its products is highly commendable. Fenton marks on simple pressed pieces are virtually always sharp, distinct and legible. But there has been a continuing problem producing clear, sharp, obvious marks on Fenton pieces involving blowing.

The McKee rolling pin mold, for example, is a blow-mold. A series of opalescent art glass pickle castor inserts made by Fenton are also blown. Marks on the inserts are just as hard to detect as the marks on the rolling pins. Of over 20 different new Fenton inserts ACRN has examined, for example, the Fenton mark was visible on only one.

Producing permanent marks in blown glass is considerably more difficult. Unlike pressed glass which is essentially complete when it comes out of the mold, blown pieces generally require considerably more shaping and handling.

With spot molds, for example, like the ones used for the Fenton pickle castor inserts, the mold only gives a pattern to the glass gather. The gather is then blown out into a shape mold. If the mark is applied in the pattern mold, the mark will expand with the gather in the shape mold. As it expands, the mark distorts and becomes less distinct. Rotating the piece in the shape mold, finishing with smoothing paddles and possibly the need to reheat a piece, further blurs any marks. By the time the piece leaves the shop floor, the mark may be almost impossible to read and very difficult to find as shown in the samples in this article.

It's great that Fenton permanently marks its products. It would be even better if extra effort went into marking blown pieces to avoid confusing new products with vintage originals.

Fenton began using molded marks on its products in 1974. The first mark was "Fenton" in raised scipt inside a raised oval. 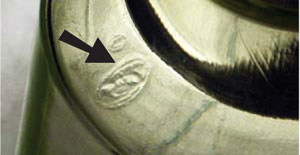 Fig. 4 Fenton molded mark on new vaseline rolling pin. Since this glass is transparent, studio lighting was able to be shined through the back to highlight the mark. Without the back lighting, it is as difficult to detect as the mark on the jadite pin in Fig. 5. This photo shows where the mark is located on the shoulder of the rolling pin. 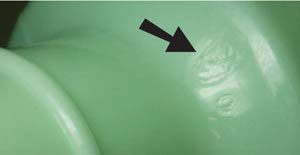 Fig. 5 Fenton molded mark on new jadite rolling pin. Even with special studio lighting, the mark is barely visible. The mark is so faint it is undetectable by touch. The piece must be rotated in the light in just the right way for the mark to be visible.

Fig. 6 The mold seams on this new Fenton vaseline rolling pin are raised slightly more than seams found on vintage mold blown pins. But seams can vary between originals. Just remember that no vintage double-ring rolling pin in vaseline was made by McKee. The vaseline version is a new Fenton product.