The name Gillinder has been associated with American glass since 1861 when William Gillinder started a glass factory in Philadelphia, Pennsylvania. William and his descendants designed and made some of the most popular pressed glass patterns of the Victorian era and early 20th century. These include: Westward Ho (Pioneer), Classic, Liberty Bell (Centennial Pattern), Holly Leaves and Stippled Star.

Some of their most highly sought after items were produced at a glass factory Gillinder set up on the grounds of the 1876 Centennial Exposition in Philadelphia. Pieces made and sold there range from small novelties such as glass canoes, shoes, umbrellas, etc. to very elegant 6" glass busts of famous Americans including Lincoln, Grant, Benjamin Franklin and Washington.

The business has been known under various names throughout the years including: Franklin Flint Glass Co. (1861), Gillinder & Bennett (1863), Gillinder & Sons (1867), Gillinder Bros. Inc. (1923). Gillinder is one of the few American glass companies to survive both world wars and the Great Depression. Family descendants continue to run the company today under the trade name Gillinder Glass, with Charles Gillinder as president.

The firm produced six new pieces of glass from old molds or old styles in the mid-1990s. Since the new pieces were virtually identical to the originals, they may cause confusion. This article will point out features which will help distinguish early pieces from those of more recent manufacture.

Like the majority of American pressed glass companies, Gillinder did not mark much of its production line glassware. About the only pre-1900 pieces that are marked were those made at the 1876 Centennial factory. Many, but not all, of those pieces are marked Gillinder & Sons or Gillinder & Sons Centennial Exhibition (Fig. 1). Pieces made after the Centennial are rarely marked. Following the company's 100th year in 1961, the paper label shown in Fig. 2 was used. Some, but not all, of the reissued pieces carry the mark shown in Fig. 3 which is molded and raised.

To our knowledge the raised molded marks in Fig. 1 have not be reproduced or reissued. The mark shown in Fig. 3, as far as we know, has not been used on any glass made prior to 1990. Most marks on our new samples were very faint and difficult to see; examine suspect pieces with extra care.

The new Washington paperweight is virtually identical to the original issued in 1876 (see Figs. 4-8). It is clear glass with a bust portrait impressed in the back side. The new paperweights can be detected by comparing their size and looking at what areas are frosted.

Nearly all known originals have frosted sides and only the portrait or area immediately around the portait are frosted on the back. New pieces have clear sides and are frosted across the entire back. Old weights are 3 1/4" dia., new are less than three inches, usually about 2 7/8". Neither old or new weights are marked. Both old and new are made of solid glass.

Gillinder Buddhas were first made in 1930 and appeared in a number of colors including green, amber and white. The same figure was reissued in cobalt blue. To add to the confusion, a very similar Buddha figure was made by the Cambridge Glass Company during the 1920s. (Cambridge also made a second style of Buddha but it is not likely to be a problem and is not part of our discussion.)

Here are some guidelines to use to separate Gillinder figures from the similar one made by Cambridge:

1. Cambridge Buddhas have a distinctive bulge in the beaded headgear; Gillinder pieces do not.

2. Cambridge Buddhas have large hanging earrings extending down to the shoulders; the Gillinder Buddhas do not have earrings.

Also reissued from an old Gillinder mold was a solid figure of a dog (Fig. 13) with a ribbon around its neck and tied in a bow. It is 4 3/4" high and made of opalescent milk glass. Old colors also include milk glass as well as amber, black, green and red.

The main difference between new and old is that the new dogs are made with a disc-shaped base (see illustration). Charles Gillinder, president, said that the mold had been modified to press the piece which resulted in the protrusion. Old pieces were sheared off flat and did not have the raised base.

New pieces were also marked with the raised molded script mark shown. Old dogs are not marked. Many new marks are very faint. If you didn't expect to find it, you could easily overlook the mark.

Gillinder records do not show when the original peacock pattern was introduced but it is thought to date from the 1920s era. The 6 1/4" vase shape in Fig. 16 was reissued in the 1990s. New pieces carry the raised script mark shown in Fig. 3; old pieces are not generally marked. NOTE: The mark on our sample was extremely faint; if you didn't expect to see a mark, it could easily be missed. As of September, 1995, this pattern had only been reissued in milkglass and in only the shape shown in Fig. 16. Another original example of Gillinder's peacock pattern in a different shape is shown in Collectors Encyclopedia of Milk Glass by Newbound, © Collector Books. (The Newbound piece is incorrectly attributed to Consolidated Glass rather than Gillinder.)

The other two pieces reissued by Gillinder are a cobalt blue crackle glass vase and an emerald green glass flower pot. Since these two pieces are more generic, they are probably less likely to cause confusion. The other new pieces--Washington paperweight, peacock vase, dog and Buddha--need to be examined closely to determine age. Other new colors may be issued in the future.

Special thanks to Lee Garmon, co-author, Glass Animals of the Depression Era, © Collector Books for her help and comments.

Fig. 1 Raised embossed lettering on some pieces produced in factory at 1876 Centennial. 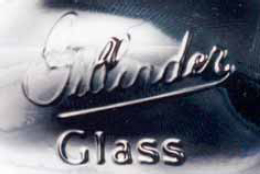 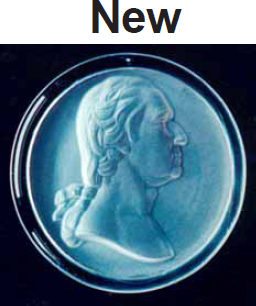 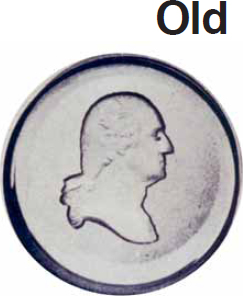 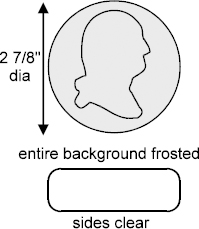 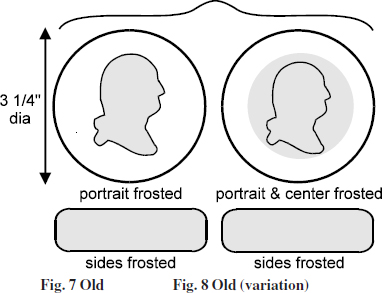 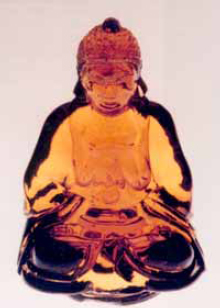 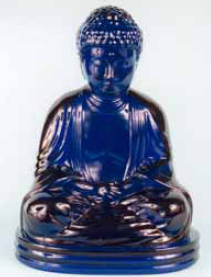 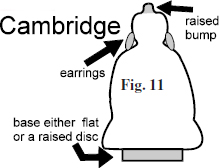 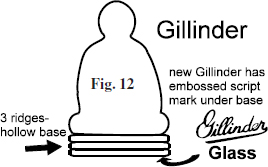 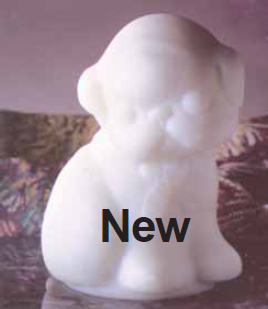 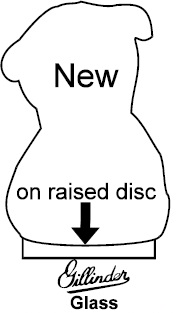 Fig. 14 This raised mark embossed on bottom of new dogs 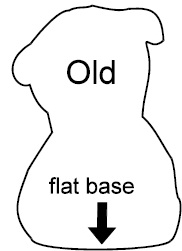 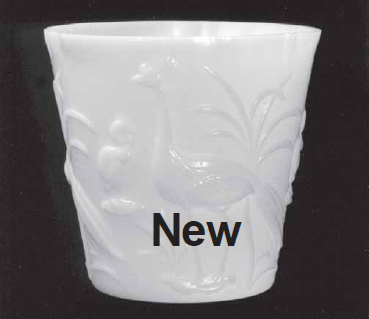