Pond sailboats, also called pond yachts, exploded in price in the mid-1990s. In autumn of 2001, an example brought $4,050 at auction, believed to have been a world record.

The number of reproductions has risen as prices of originals has climbed. Quality of new sailboats has also greatly increased and made detection of the reproduction ships more difficult.

In 1996, for example, when ACRN (Antiques Collectibles Repro Newsletter) first reported on these craft, reproductions were strictly for shelf display. They were built strictly as "antiques" and never meant to be placed in water. Hulls were not waterproof and there were no seals around masts, rudders and hatch covers. Yards, arms and spars–names for the horizontal parts of masts–were usually glued in place and not movable. Ship rigging, the system of ropes used to trim or adjust sails, was not functional.

Another important clue to detecting the earlier mid-1990s reproductions is the lack of a weighted, or ballasted, keel. A keel is the flat sided vertical panel or bulge on the bottom of the hull which extends from the hull down into the water. Keels help keep sail boats from tipping over by counterbalancing the push of air against the sails. Since they were shelf pieces never meant to sail, most reproductions of the mid-1990s, do not have weighted keels. Many new ships of this time also had permanently attached bases and stands which is another clue they were never intended to be placed into the water.

The latest pond sailboat reproductions are fully functional sailboats. They include weighted keels, fully adjustable sails and all necessary rigging to trim and adjust sails. They are available in various sizes starting around $100. A much closer inspection is required to catch this latest generation of copies.

First, here are some features that generally have nothing to do with age and are NOT reliable tests of age.

1) Number and types of sails. Both new and old ships have various styles, shapes and numbers of sails. Just keep in mind that sails must be able to be adjusted to be used on a working sailboat.

2) Size. New and old are found in various sizes from around 20″ long up to 60″ long. The original ship shown in Fig. 2 is exceptionally large and not a typical size.

3) Tool marks and other signs of handwork. Both new and old are made by hand, usually with hand made or at least hand fitted parts. Tool marks left by knife blades or fine saw marks are commonly found on both new and old. New ships are generally made in China, India or the Philippines.

What should you look at to determine age? Generally, virtually all original ships have at least some brass fittings. These should show a natural darkened patina. Although new brass can be artificially darkened, natural patina is difficult to imitate.

Look for normal wear. If a ship has actually been sailed, look for wear patterns around moving parts. Virtually all working sails, for example are attached to masts with brass rings. The insides of rings, continually rubbing against the wood masts, should be brighter than the outside of the ring. This is true even for ships that may not have been sailed for many years.

If you are unsure in your ability to detect wear, consider using a long wave ultraviolet light. New synthetic threads and strings virtually always fluoresce under black light. Look for new thread in the stitching of hems, or edges, of sails. Look for new string in the rigging used to trim sails.

Many modern synthetic glues and sealants, such as silicone, also fluoresce. Glues used before about 1940, such as hide glues, are generally based on organic proteins. The vintage natural glues rarely fluoresce. Some modern varnishes and paints also fluoresce.

Of course, these are general rules regarding ultraviolet. There is always the possibility that new strings and glues have been used to repair or restore a genuinely old sailboat. 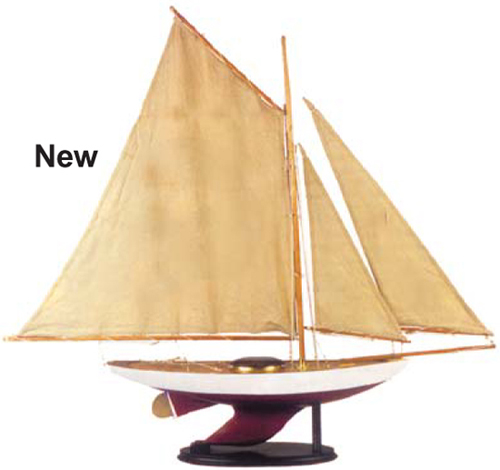 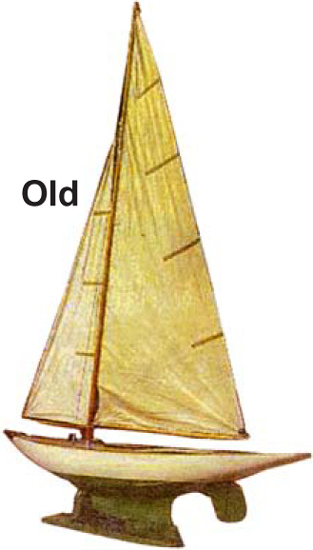 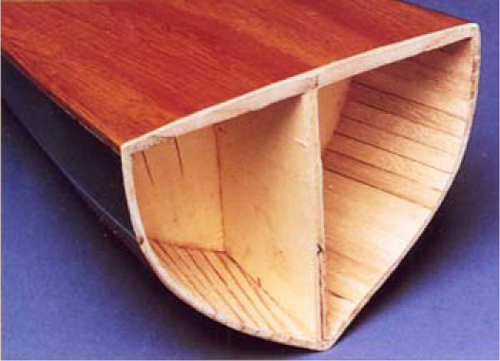 Fig. 3 All new pond sailboat reproductions are hand made. This cutaway of a typical new hull shows many small pieces of wood used to assemble the hull and deck. Don't mistake lots of handmade detail for age. 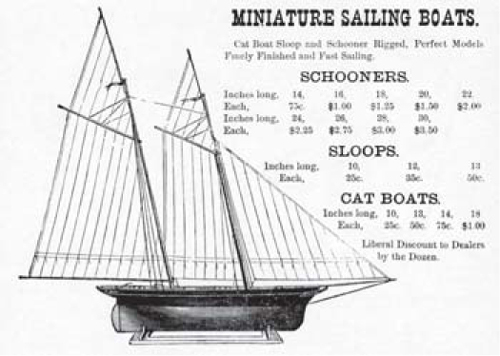 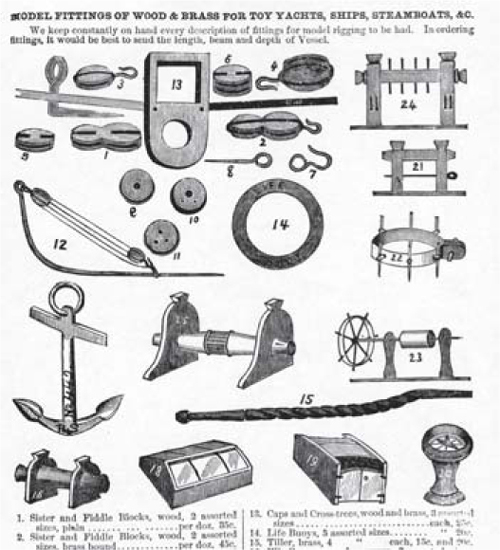 Fig. 5 Catalog page ca. 1896 of parts for building sailboats. Fully functioning parts made of wood and metal including brass. 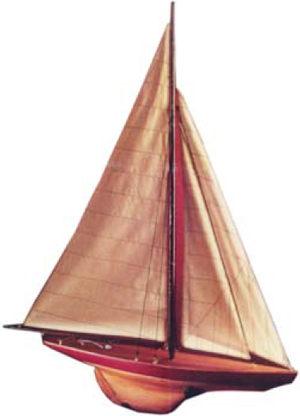 Fig. 6 Typical reproduction pond sailboat from the mid-1990s. Keel is not weighted, hull is not waterproof, sails cannot be trimmed, no seals around hatches and other openings. This example 43″ tall by 43″ long. 1996 price $99. Many other sizes both larger and smaller available, $39-$250. 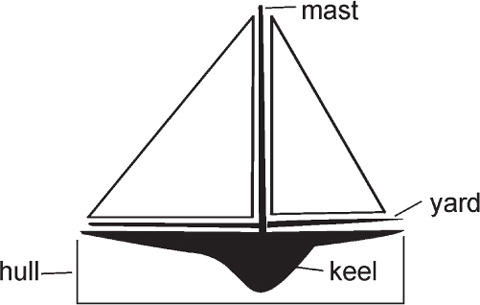