Throughout the 1970s and 1980s, a great number of new game plates and portrait pieces were imported into the United States by reproduction wholesalers and giftware distributors. Many of these new pieces had marks which were then, and now, easily confused with marks on old game and portrait plates. This article will review some of the most common decorations and marks used on those confusing pieces.

The plates in Fig. 4, for example, are only a sample of the range offered in a small catalog supplement of AA Importing Co., in 1975. Generally, the same designs were available from a number of wholesalers and distributors. Many designs appear in catalogs year after year and must have been good sellers. Others are seen for only a few years then dropped. Prices for the plates shown in Fig. 4 range from $2.50 to $4.25 each wholesale.

Popular designs also appear on shapes other than plates. The four shapes shown in Fig. 5 were part of a 12 piece series that included urns, vases and compotes some of which had metal mountings. Original 1970s wholesale prices for this group ranged from $5 for plates to $27.50 for the large urns with metal handles.

Being familiar with the designs and decorations known to have been reproduced is helpful but not essential to establishing age and authenticity. In fact the transfer decorations on these modern plates are made and applied in essentially the same way as decorations were applied to old originals. A much better way to prove their recent age is by looking at the marks applied as backstamps.

Although most antique reproductions today are made in Asia, reproductions of any modest quality at all were still being made in Europe until the early 1980s. That is why most of the reproduction game and portrait plates we are now discussing legitimately carry German and Austrian markings. It is the presence of such words as Germany (not West Germany), Bavaria, Austria, etc., that makes the new marks appear old. The new marks most commonly appearing on the new plates are shown at the end of this article.

The majority of these marks are importer's marks. That is to say they are marks designed or requested by the importing customer rather than marks required by law by U.S. customs or for export from the country of their origin. This is why you will not find these marks (with some exceptions) in books with antique marks--no old originals exist. True, some new marks include place names and symbols found in genuine old marks. But those features--such as the beehive (see note below), crown, etc.,-- are included more for their impressive appearance rather than to accurately identify their source or age.

Known colors of the marks are also listed but there are probably many variations. Other words and symbols also appear frequently with the basic marks shown. These include the blue beehive, for example, as well as numbers that appear to be year dates (such as those in the Napoleon battle series) or decorators' codes (see Figs. 16-17).

In addition to the various backstamps, many new game and portrait plates also carry telltale markings on the front. These include facsimile signatures which appear in the transfer such as "Vernet", "Meissonier" and "Fragonard" to mention a few (Figs. 18-20). The Fragonard signature is a time worn standard appearing on many china reproductions over the years which are backstamped everything from Nippon to RS Prussia to Limoges.

Also beware of most titled decorations such as those which appear on the Currier & Ives series (Fig. 17) and on many portrait pieces (Fig. 19). Another common clue to recent manufacture is "Gold Trim" or "Genuine karat gold trim" or similar phrase using the word "gold". Original period pieces were made before all the modern gold look-alikes were invented; if it looked like gold, it was gold and no special wording was needed to call attention to the fact. Modern pieces, however, often include a statement about the quality of the gold to distinguish it from present day synthetics and look-alikes.

The appearance of place names such as Austria, Bavaria, etc., in marks is not an indication age or quality. Many such marks were designed by importers within the last 20-30 years to suggest value and quality. Transfer decorations of nostalgic subjects--such as 19th century portraits, Indians, western scenes, etc.--are likewise not a reliable indication of when a piece was made. Be particularly cautious of lengthy or prominent captions, artist "signatures", titles and other markings near the main decoration. Be wary of bright shiny gold; gold trim on original period pieces is worn to a mellow appearance, it is too bright on the new pieces.

Pieces with any of the marks shown in this article are at most 20-30 years old, they are not antique. No further test is needed.

Marks commonly called "beehive" are actually shields--they have been turned upside down by mistaken identity. Because most of the original shield marks are associated with age and quality, modern manufacturers capitalize on this belief by including such marks with their regular mark (see Fig. 16). "Beehives" in a mark are no guarantee of either age or quality.

are actually shields turned upside down 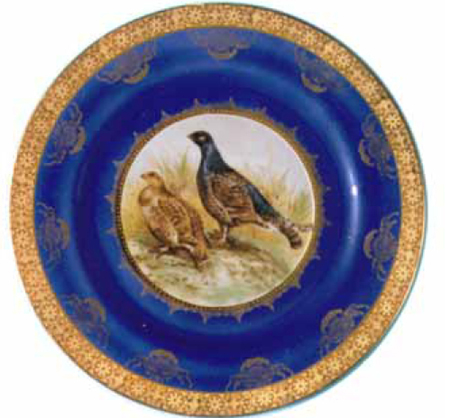 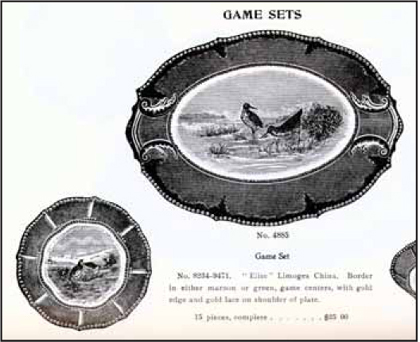 Fig. 2 Original game set from 1899 catalog. Available in green or red borders,gold rims and gold lace on shoulders. Sets like these are the inspiration for the reproductions shown in this article.

Fig. 3 Terms used to describe parts of a plate. 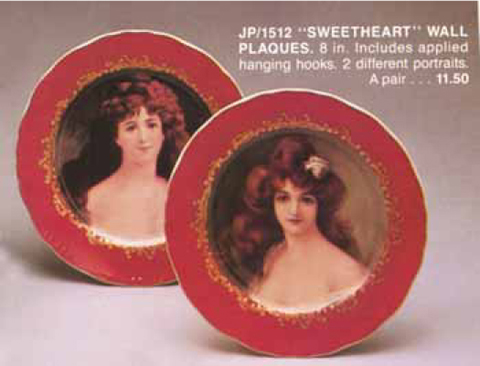 Fig. 4 Typical transfer decorated "portrait" plate sold by reproduction wholesalers for many years. The same transfer also appears on other new shapes such as vases, pitchers and chamber sets. A variety of new marks may appear on these pieces. These plates are from a 1984 catalog. 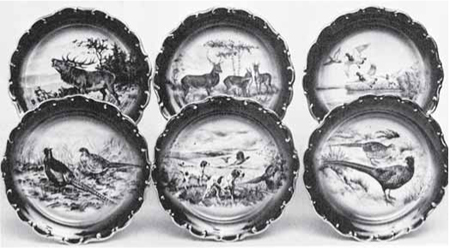 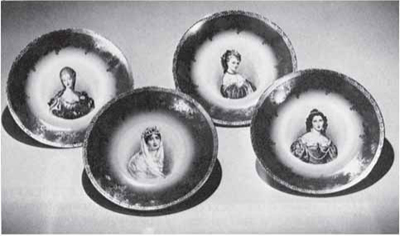 Fig. 6 Figs. 5 & 6 Many new game and portrait plates were issued in a series or groups. Fig. 5 shows a series of hunting scenes with dogs and game birds on 12″ dia. plates from a 1974 catalog. Fig. 6 shows a series of royal ladies 10″ plates from the same catalog. Both sets have marks like those shown at the end of this article. 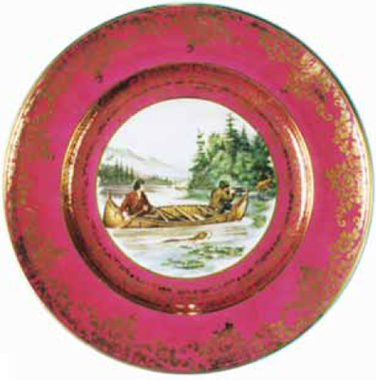 Fig. 7 One plate from a ca. 1970s series of new plates titles "Currier & Ives". These plates were 10 1/4″ dia. with burgundy or cobalt blue shoulders and gold rims and trim. Various hunting and fishing scenes taken from original Currier and Ives images were used as transfer decorations. These plates have a facsimile Currier and Ives signature with the title of the scene on the front of the plate. Wholesale, $4.50 each. No ceramic plates were ever made by the original 19th century firm of Currier and Ives.

Fig. 8 A ca. 1970s series of 10″ plates with sailing ships from a reproduction wholesale catalog.

Fig. 9 A ca. 1970s series of 10″ plates with steam locomotives from a reproduction wholesale catalog. 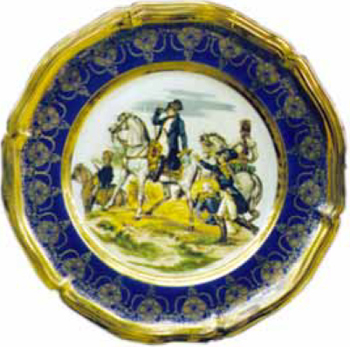 Fig. 10 A 12″ plate from a ca. 1970-80s series depicting Napoleon at famous battles. The date of the battle appears on the back side and may be mistaken for the date of manufacture. These plates have a "beehive mark" in blue on the back. 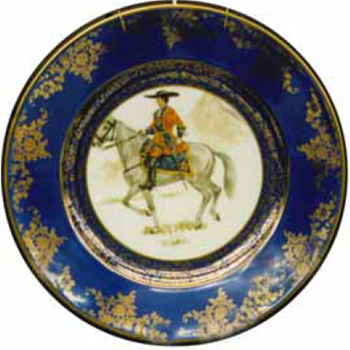 Fig. 17 The numeral two, right center, appears hand painted but it is a transfer.

Fig. 17 Simulated handwritten title on Currier & Ives series plates. Note the misspelling of "cArrier"; an A has been used instead of the U. 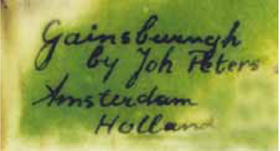 Fig. 19 Typical example of a title and facsimile signature on a new portrait plate.

The pieces illustrated in this article carry the first 5 marks shown below. The next 4 marks are found on a wide variety of reproduction china including portrait and game plates as well as other shapes.

Carl Schumann porcelain; after 1945. In blue, red and black.

Most commonly seen in blue but also red and green.

In black, red, blue, and green.

Most commonly in blue and red but sometimes in gold.