A new pickle castor frame is now available. Unlike other new castor frames which are nickel plated, this particular model is plated with real silver. The frame measures 13 inches overall with an insert opening of 3¼ inches. New frames sold for $25 each and included the six-inch tongs shown in Fig. 5.

This frame is shown with a new cranberry opalescent insert in the fern pattern made by Fenton. New Fenton inserts are mold blown and hand finished. During this process, the Fenton oval mark is frequently blurred and often so faint as to be nearly invisible.

Fig. 1 New silver plated pickle castor frame, slightly over 13 inches to the top of the frame. The opening in the base for the glass castor is 3¼ inches diameter. No permanent mark. 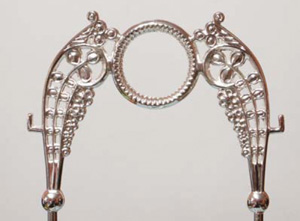 Fig. 3 The new base has an embossed pattern of flowers and insects. 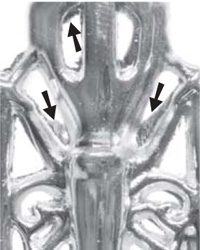 Fig. 4 Many new metal frames and tongs have excess metal (finning) in pierced designs. The metal leaks out between the molds and is not removed. 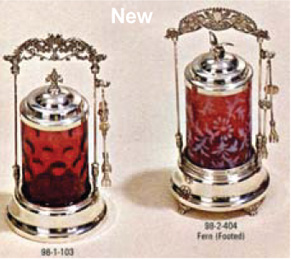