Although chintz ceramics have been produced since the 17th century, most American collectors are looking for the English chintz pottery produced from the 1920s until the late 1950s by factories like Grimwade's (Royal Winton), James Kent, Elijah Cotton (Lord Nelson) and A.G. Richardson (Crown Ducal).

In 1996 three books were published almost simultaneously in Canada, in the United States and in England and collecting became frenzied. Inevitably, the factories were approached to reproduce chintz and both Royal Winton and James Kent started to reproduce their old patterns and shapes in 1997. It can be difficult for new collectors or occasional chintz dealers to buy chintz with confidence — especially on the Internet auction sites.

When Royal Winton decided to make new tableware and gift wares they used the so-called "deco" backstamp (original shown Fig. M-6). The company felt that adding "LTD." with the period and putting a black circle around the mark were sufficient to identify the new backstamp (Fig. M-8). Various collectors groups around the world disagreed.

After discussion, the factory added "1995" under the backstamp starting in February 1998 (Fig. M-10). Pieces sent from the factory from late 1997 to February 1998 do not have "1995". The three patterns reproduced during this three or four-month period were Summertime, Florence and Julia.

Keep in mind that the "1995" in the backstamp is NOT a production date. The "1995" refers to the date that the factory was bought by the present owners Taylor Tunnicliffe and pieces will continue to be marked with that date whenever they are made.

For most small chintz pieces, it would not be worth altering the new back stamps but teapots and breakfast sets often sell for $1000+. Since it is possible to alter backstamps, there are several other indicators to watch for.

Collectors tell me they find the new chintz shinier, the lithographed patterns slightly different, and the body somehow heavier but this is difficult to spot if you are buying over the phone or on the internet. Check the foot rim. The Works Manager at Winton tells me that the new chintz has the foot rim unglazed because Winton has a special machine to grind off the glaze. On old pieces you often see three pin marks where the piece sat on pins in the kiln.

With the Winton teapots, check the finial – the new teapots have gilding around the top and the bottom of the finial whereas the old lids have gilding only around the outside edge of the top of the finial (Figs. 7-10). The new teapots are molded in a single piece so look inside or ask for a photograph of the inside where the handle meets the body. In the old pots the handle was added and the inside is smooth. The new pots have indentations inside because the handle is part of the mold (Fig. 3). The new pots do not have a strainer at the inside of the spout (Figs. 4).

The ordinary new Ascot shape teacups, creams and sugars do not have a second line of gilding around the inside top rim like the vintage ones (Fig. 11). Recently, however, more expensive pieces like breakfast sets and tennis sets have been produced with the second line of gilding added. If you are buying a breakfast set unseen, be sure to check the backstamps on all the parts. Toast racks (Fig. 12) are easily damaged and the new toast rack says only 1995. The old ones usually have "Made in England".

Pay particular attention to Julia pieces with a blue backstamp (Fig. M-11). Julia was produced in 1998 for Clementine Rusk, a California company, and it would be very simple to alter the backstamp. Some of the limited editions were editions of 2000 and some were 250. Check in the section on new chintz in the Charlton Guide or contact the factory to determine the issue size since this clearly affects the value.

Since Julia is one of the most popular chintz patterns worldwide, it would be worth the effort to change the backstamp. A vintage Julia stacking teapot, for example, is currently valued at about $2,200; a vintage four cup teapot, $1,100.

In the summer of 1998, Victoria magazine offered their readers the opportunity to buy 1000 individually numbered Welbeck teapots in the Ascot shape. Collectors assumed that this was a limited edition but discovered only weeks later that several thousand more unnumbered teapots were also produced and sold to Victoria readers.

James Kent is reproducing DuBarry, Hydrangea and Rosalynde as well as new colorways in these old patterns. The company had stored all the original molds since the 1950s and were able to re-use the original molds for their 1990s reproductions. This makes the James Kent reproductions even more difficult to spot. The backstamps are very similar but there are several differences that should help you spot the newer pieces — anything with "100 Year Anniversary" or "Limited Edition" is clearly a new piece.

Similarly the 1999 backstamp says "Collectors' Chintz" in the banner under the globe (Fig. M-2). The series of globes and banners can be quite confusing and should be studied. Most James Kent pieces do not sell for the same amounts as Royal Winton but stacking teapots and ladles should be checked. The factory has begun to reproduce the mayonnaise bowl, stand and ladle and the ladle is unmarked in any way. Very few original ladles turn up so if you are offered one check the source very carefully.

Royal Winton and James Kent would argue that these pieces are not reproductions but re-issues – the original factories are simply going through their archive and recreating successful designs from the past. Clearly there is no attempt to deceive on the part of the factory – these are not fakes from anonymous factories. Once a new collector or occasional chintz dealer has handled a few new pieces, they will not have much difficulty protecting themselves from being fooled regardless of the backstamp.

Susan Scott has written articles on 20th century English ceramics for New England Antiques Journal, The Antique Trader, Today's Collector, Collectors' Eye and others. Her book is The Charlton Standard Catalogue of Chintz. This article was written with the help of Sheryl Vogt, Royal Winton Collectors' Club, Australia and Steven Phillips. 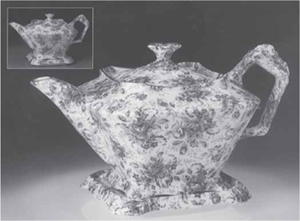 Fig. 1 Many pieces of new chintz like this James Kent Rosalynde teapot are made in the original molds (old shown in inset). Old shapes as well as old patterns are being reproduced. 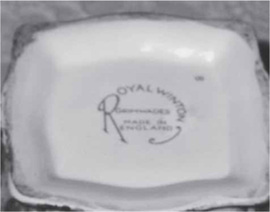 Fig. 2 High prices for original chintz tempts forgers. The backstamp on this new teapot has been altered to resemble a vintage backstamp. 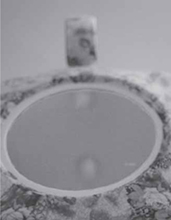 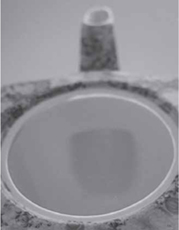 Fig. 4 Reproduction Welbeck Teapot. Note that the inner spout has no strainer (Fig. 4). The inside wall under the handle is not smooth (Fig. 3) as it would be if the handle had been attached separately, rather than formed in one piece in the mold. 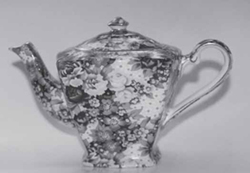 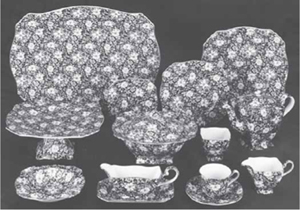 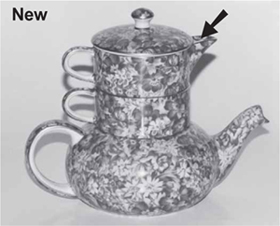 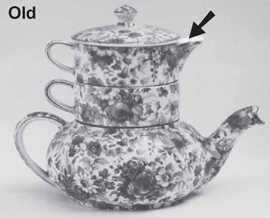 Fig. 8 Vintage Royal Winton stacking teapot in Summertime pattern. Only a single line of gilding on the finial (Fig. 10). The vintage creamer does not have the pattern inside the spout (arrow, Fig. 8). 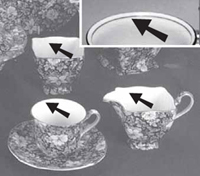 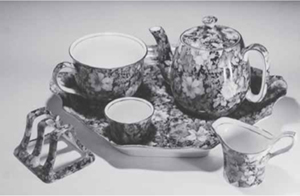 Fig. 13 Three highly desirable two-cup vintage teapots. All three patterns –Welbeck, Julia and Summertime–have been reproduced for several years. The Countess and the Ascot two-cup teapot shapes were reproduced as of November 1999. 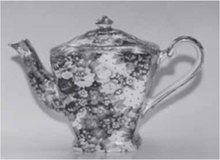 Fig. M-1 This 1999 backstamp is the one most likely to confuse collectors. 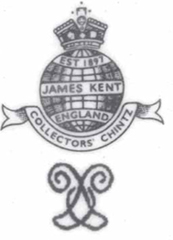 Fig. M-2 Recent backstamp with fancy monogram. Any backstamp with this kind of elaborate monogram is 1999 or later since this is when the factory began to identify their decorators with special marks. 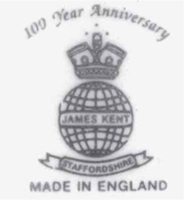 Fig. M-3 James Kent produced a number of pieces in 1998 which did not include the pattern name in the backstamp.

Fig. M-6 Original "deco" black backstamp is just under an inch in diameter. The reproduction backstamps come in two sizes – ¾ inches and 1¼ inches. Many of the backstamps on vintage pieces were applied with a stamp, not as decals. That's why many originals are often a little smudged.

Fig. M-7 If the "deco" backstamp incorporates an "A", you can be reasonably confident that the piece is vintage. The "A" was first used about 1943 and remained part of some backstamps until the 1960s.

Fig. M-8 New "deco" backstamp used on giftware/tableware produced from Fall 1997 through February 1998. Letters "LTD." have been added under Grimwades. In February 1998 the factory added "1995" to the backstamp to prevent confusion. (see M-10 below).

Fig. M-9 Giftware/tableware produced from Fall 1997 to February 1998 has occasionally turned up with this backstamp.

Fig. M-11 Blue backstamp used on the Julia produced for Clementine Rusk of California. It would not be difficult to modify this mark to resemble an original backstamp.

Where to see new chintz

Once you have handled a few pieces of new chintz you will be able to differentiate it more easily from the vintage. Check out local gift shops and shows since many of them may have new chintz for sale.

There are a number of sites on the Internet where you can see new chintz. Here is the Royal Winton site.