A sewing bird is a clamp, usually fastened to a table, to hold fabric for hemming or embroidery. The first sewing clamps were individually forged in the first quarter of the 19th century. By the mid-1800s, sewing birds were factory-made of iron and or brass. Some clamps were figural including birds which gives the clamp its name.

Original factory-made sewing birds, depending on condition, can sell for $150 and up with early hand forged pieces bringing over $500. The Indian reproduction is retailing for $39-$49.

The sample Indian-made sewing bird purchased for this article came in a blue velvet covered case lined with purple satin. A old styled brass catch completed the vintage look of the case.

Both the earlier Japanese reproduction and the Indian sewing birds are stamped brass. Unlike the Japanese version, however, which had a very faint "JAPAN" mark inside the clamp, the Indian bird is not permanently marked. The best way to identify both reproductions is to examine the details of construction.

The other feature separating most old pieces from new is how tightly the pieces forming the bird fit together. Original top and bottoms halves fit together with virtually no gap between the parts (Figs. 3-4).

The number of cushions on a bird is not a reliable clue to age. Most, but certainly not all, original birds have two cushions mounted on them: a small cushion on the bird's back and another larger cushion at the top of the clamp. Cushions on reproductions vary. The Japanese bird had two cushions; the current Indian reproduction only a single cushion.

You'll also want to examine the spring that forces the halves of the bird together. Original springs are usually about 1/16″ thick; the spring in the Indian bird is about 2-3 times thinner, only about 1/64″ thick. The new spring is a bright gunmetal blue with no tarnish or normal signs of aging. Original springs are also steel but were never blued and generally show a dark patina. Corrosion and light surface rust are also common to original birds 150-125 years old.

Only factory-made sewing birds have been reproduced in large numbers. Copies of hand-forged clamps may be in the market but are not widespread. 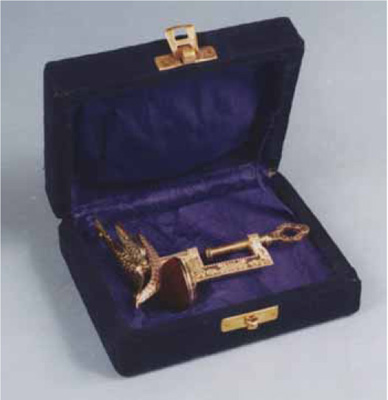 Fig. 1 New sewing bird is packaged in hinged box. Dark blue velvet covers the outside of the box; it is lined with purple satin. The solid brass catch in front is tarnished to simulate age. 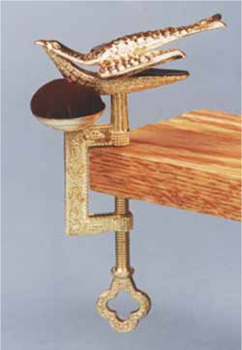 Fig. 2 New brass sewing bird removed from box and clamped for display. The bird figure is 2¾″ from tip of beak to end of tail. 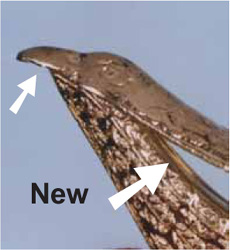 Fig. 3 There is a large space between upper and lower halves of the reproduction. The lower half of the beak does not extend to the end of the upper beak (small arrow). 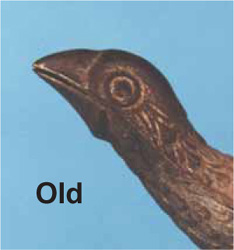 Fig. 4 Head and neck of typical original sewing bird. Upper and lower halves fit tightly together with no gap. The lower beak fully extends to the tip of the upper beak.

Fig. 5 Side view of spring in new bird. New spring is only about 1/64″ thick and gunmetal blue in color with no sign of normal aging.

Fig. 6 Side view of spring in typical old bird. Old spring is 1/16″, two to three times the thickness of new spring. Dark color from normal aging.

Fig. 7 View of new wing from bottom side. The entire top half of new bird is stamped from thin brass. The feathers on the top side show through on the bottom side. Note the thin edges (arrow).

Fig. 8 Virtually all old manufactured metal sewing birds have patent information. In the old example shown here, "Patented Feb, 1853" is molded on the top of the bird's wing. 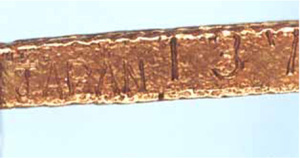 Fig. 9 Japanese reproduction is faintly marked "JAPAN" on inside of clamp. This mark is often illegible and difficult to read. 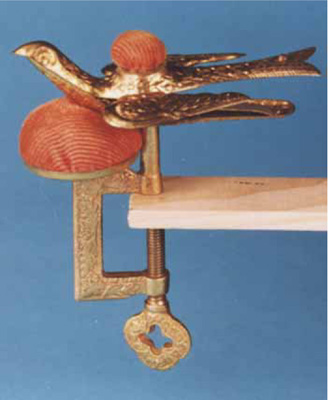 Fig. 10 Earlier reproduction made in Japan from 1950s through 1980s. Lower beak does not match the upper; hollow rivet holds upper and lower pieces together; no patent information.