Since the mid-1990s there have been a wide number of faked Nippon marks appearing on new porcelain.

The first fake marks of the 1980s were on blanks with decorations unlike that of original Nippon and were relatively easy to identify. Recent fakes have improved tremendously and have many of the features of originals such as heavy raised gold, pastel colors and very accurate copies of original marks.

One of the reasons Japanese porcelain was popular in the U.S. was because it was usually less expensive than porcelain from Europe or England. The low cost was not based on low quality, however. It was due to Japanese workers being paid very little for the time and skill they brought to their work.

The period between the passage of the McKinley Act in 1890 and the English word ruling in 1921 is the only time "Nippon" appeared in authentic marks. For years, this knowledge was an easy rule of thumb collectors used to their benefit. Any mark with "Nippon" had to be made before 1921 when the word was banned from U.S. imports. This rule held true until the early 1980s when new porcelain began appearing with marks containing the word "Nippon". Did the law change?

No, the McKinley Act did not change; nor was it interpreted differently. Goods imported into the U.S. still must be marked with the English name of the country of origin. However, new porcelain, imported from Taiwan for example, meets all current U.S. Customs requirements with a simple "Made in Taiwan" paper label. The appearance of other names on a piece, such as Nippon or R.S. Prussia, Limoges, etc., is not illegal.

Why? The majority of words collectors associate with age or quality--like Nippon, Prussia, Limoges, etc.--are generally place names for countries or regions that no longer exist. For U.S. Custom's purposes, old place names are ignored as long as the present day country of origin is stated. In other words, a confusing mark including the word Nippon is not illegal as long as the piece is also marked "Made in Taiwan (or China, Indonesia, etc.)". Unfortunately most "Made in...." country of origin markings are usually removable paper stickers. New marks with Nippon and other confusing words and symbols are usually under glaze and are not removable. Persons who want to misrepresent a new piece simply remove the country of origin label. It is then up to the buyer to detect the often subtle differences between new and old marks.

Detecting fake marks from memory alone can be difficult. No one rule can be used to detect all the new marks. What may be an indication of a fake in one mark, may not be of help when examining another mark. Most marks need to be examined on a case by case basis. Apply the guidelines for new and old only to the specific mark being discussed. Study and familiarize yourself with the key features of original marks listed by the photographs and illustrations in this article. Don't be misled by large areas of raised gold or what appears to be genuine old colors and old decorations. The overall appearance of the latest reproductions is becoming more and more like Nippon originals. 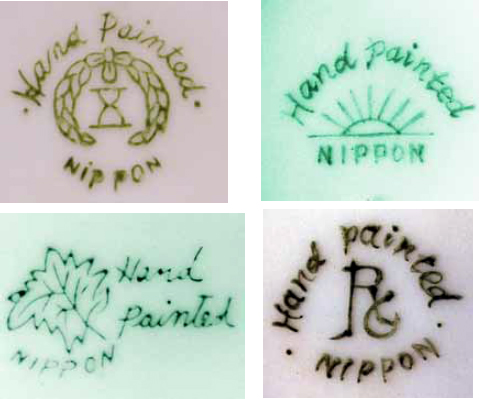 Fig. 1 A sample of new Nippon marks. All are copied from genuine pre-1921 marks. 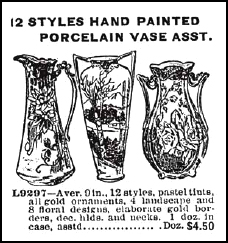 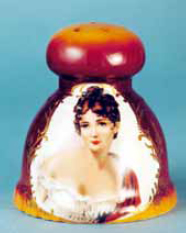 Fig. 5 Many place names associated with age or quality are permanently marked on new porcelain made in Taiwan, Japan, India, etc., The new hatpin holder in Fig. 5 was made in Japan and originally had a "Made in Japan" paper label. However, it is permanently marked with the confusing new Limoges mark in Fig. 4. 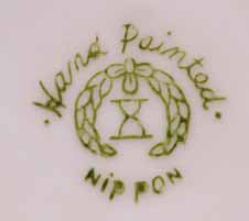 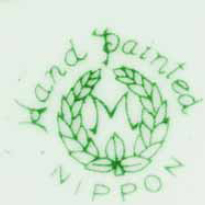 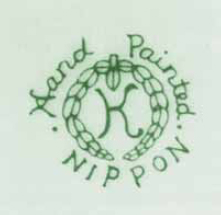 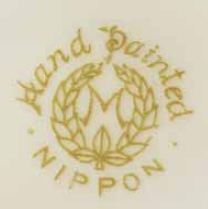 Fig. 9 Original mark -- The wreath is open at the top. All lines are quite solid and distinct.

Details in original wreath marks There are distinct decorative flourishes in the letters H and P of Hand Painted. The three leaf figure at the base of the wreath should have a stem. 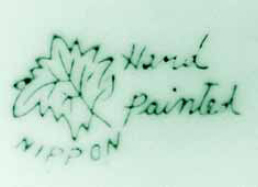 Fig. 10 The leaf in the new mark is about 1/2" wide. The leaf itself is poorly shaped and the lines tend to be broken and weak.

Fig. 12 New rising sun: mark (A) There is a white space between the jagged edge of the rays and the solid body of the sun. (Sample unavailable for photographing.) 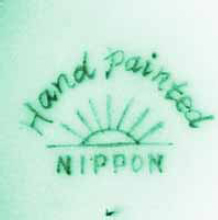 Fig. 13 New rising sun: mark (B) The semi-circle of the sun is shown in outline (hollow). Rays are straight lines. 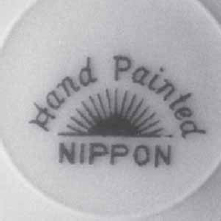 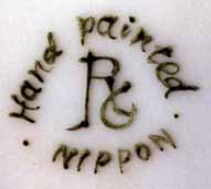 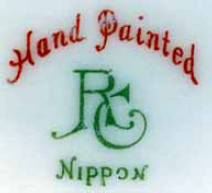 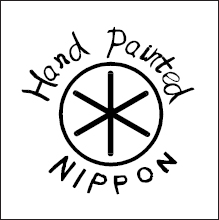 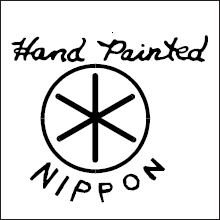 Fig. 18 Old Spoke mark: The words "Hand Painted" are set in a straight horizontal line at the top. (Sample unavailable for photographing). 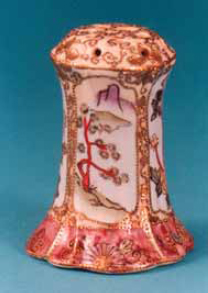 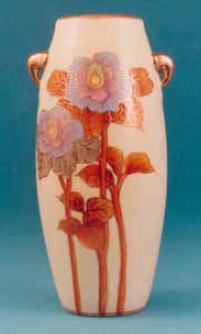 Fig. 20 8" vase with new RC mark. The same decoration appears on the bowl in Fig. 24 below. No specific mark is found on any specific shape or any particular decoration. Any new mark can appear on almost any new shape. 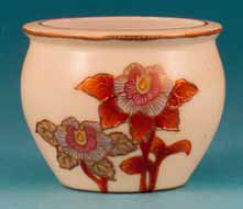 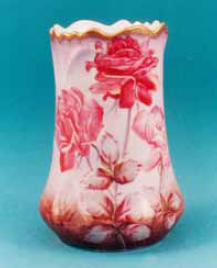 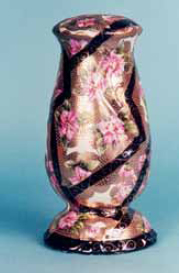 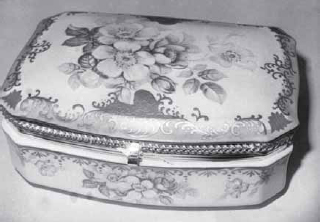 Fig. 27 A 8" porcelain box with metal hinges and trim. Marked with new K in wreath mark. 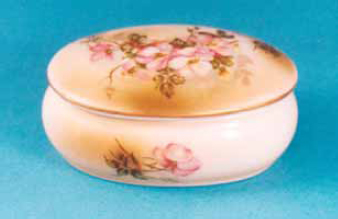 The entire mark is green. The R and C do not appear as distinct letters. Lines forming the mark are very weak and thin.

"Hand Painted" curves around the top of the circle.

This mark is considerably larger than the original. The leaf is approx. 1/2" wide.

There is white space between the body of the sun and the bottom of the rays.

The body of the sun is an outline. The rays simply straight lines.

Wreath turned upside down; an hour glass in the center, (hour glass was never used in an old mark)

Wreath is closed at top; no stem on 3-leaf figure at base of wreath.

The original mark is in two colors. The words "Hand Painted" are red; "RC" and "Nippon" are green. Letters R and C should be well formed and distinct. Look for the curled loop in the P in painted.

"Hand Painted" is set in a straight line. There is a loop in the cross bar of the letter "H"

The width of the leaf in the old mark is approx. l/4"wide.

The body of the sun in the old mark is solid.

The letter "M" in the center. Note that the wreath is open at top.

There is a stem at the base of the 3-leaf figure at the bottom of the wreath.