Advanced and beginning buyers alike have been fooled by new wall vases with fake Nippon marks. Joan Van Patten (author, Collectors Encyclopedia of Nippon series) was contacted by a number of persons at the recent Nippon convention who admitted to buying the new pieces.

"Several advanced collectors have ended up with these new wall vases," Van Patten said in a interview. "They [new wall pockets] have fooled lots of people, not just beginners. Collectors buy them hoping they're "sleepers" then are naturally disappointed to find out the pieces are brand new."

Van Patten points out that authentic Nippon was hardly ever made in a wall vase, or wall pocket, shape. When an original wall vase does surface, it is almost always a cone shaped piece (Fig. 5). As of this date, all the new wall vases have had flat backs, none of the new shapes are cone shaped.

There are at least two other new wall vases not shown here that have been described that no samples could be found to photograph. The surface of one is entirely covered in gold, then decorated with a few flowers. The other has flowers in wide stripes of black bands. These pieces also carry new marks.

Buyers seem to be convinced the new wall vases are old because there is a confusing mark on the new pieces. It is a green wreath mark virtually identical to the original green wreath mark in all respects including size and color (see Figs. 6 & 7). Previous fake marks were relatively easy to separate from originals because they were not exact copies. Marks alone should not be used as a single test for age or authenticity.

Another confusing feature of at least one of the new wall vases is the pattern. The raised gold and pink flower pattern shown on the new wall vase in Figs. 1-3, is almost identical to an original pattern shown on an authentic creamer in Fig. 4. This pattern features gold garlands with pink flowers draping from a gold disc with raised white enamel dots. It appears on many reproduction shapes including 10" candlesticks, two different hatpin holders, a dresser tray, 8"-10"-14" jardiniere, sugar shaker, and two large bowls in addition to the wall vase shown below.

Earlier reproductions had less accurate marks so marks can still be part of your test of age, but not your only test. All new pieces, regardless of shape, are almost always much heavier than originals, sometimes approaching one quarter inch in thickness. Originals are translucent porcelain which allows light to pass through. Most, but not all, new pieces are more dense and do not allow as much light through their walls. One of the best tests is to check the interiors for glaze. Regardless of shape, virtually all originals are fully glazed on the inside. Most, but not every one, of the reproductions is not fully glazed on the inside.

Use all of these tests before making a judgement on age and authenticity. No one test alone will catch all the different types of Nippon fakes out there. 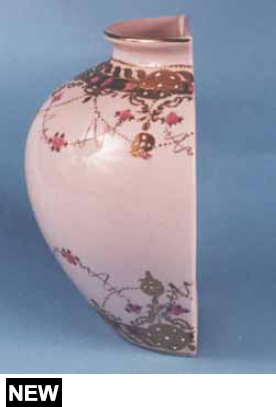 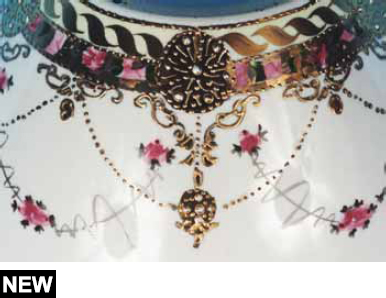 Fig. 3 Close up of raised gold and pink flower decoration on the wall vase in Figs. 1-2. An extremely close copy of a vintage pattern shown on the original creamer, Fig. 4. The key feature is the gold disc with raised white enamel dots. It is surrounded by garlands of raised gold dots with hand painted pink flowers. 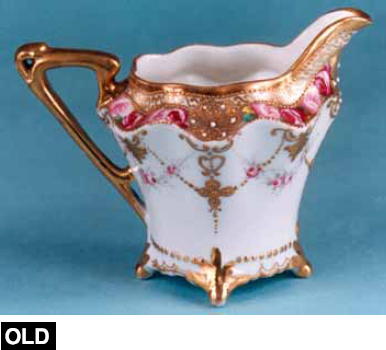 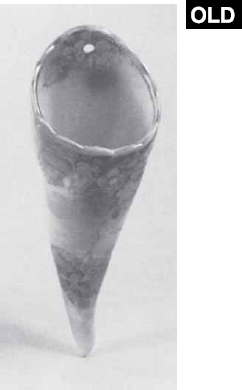 Fig. 5 Virtually all original Nippon wall vase are cone shaped like this example. So far, no reproduction wall vase has been seen in this authentic shape. About 7" high; has maple leaf mark in blue. This same shape also is found as a wall hanging hatpin holder. 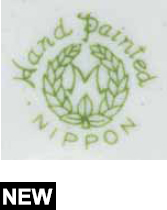 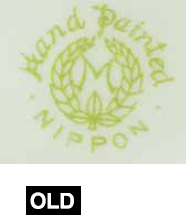 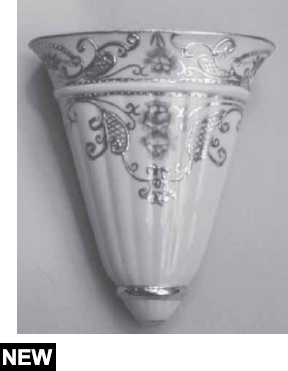