Reproductions of a classic 1930s Hubley cast iron race car have been fooling buyers across the nation. This model features 12 exhaust flames that move up and down in the hood as the wheels turn.

Sales of the new Hubley racer have been reported up to $750. Noel Barrett and several other toy experts explained that originals of this model currently bring $2,500-$3,500. Hubley produced two sizes of the original racer. One 7″ and the other 10 ¾″. The 10 ¾″ size is the model discussed and shown in this article. As of 1999, the small size is not known to be reproduced.

The vast majority of cast iron reproductions are crudely made with rough pitted surfaces and thin layers of poor quality paint. These new Hubley racers are on an entirely different level. The casting quality is generally very good, very close if not equal to original quality. Paint is thick and heavy, also very similar to original paint.

The new paint is also very convincing at first glance. It is thick and heavy like the enamels used on originals. Because it is thick like the original paint, it produces the deep irregular chips (Fig. 8) that buyers normally look for to authenticate old cast iron. New paint on most cast iron reproductions is much thinner and does not produce the deep irregular paint chips. This test, which has been used for many years to separate new from old cast iron, does not apply to the new Hubley racers.

So far the only color scheme found in the new cars is an orange body, red exhausts and gold trim on the "tail", fenders and mud guards. This is an exact copy of an original color scheme.

Who ever is painting the cars is doing an excellent job. The gold trim, for example, on originals is a very thin, transparent streaked wash rather than a true paint. Gold trim on the new cars is a perfect match of the same hand brushed, streaked and washed out gold.

Another confusing feature of the new cars is the color of exposed unpainted metal. Unpainted surfaces of the great majority of cast iron reproductions are shiny silver or red with rust. In the new Hubley racers, unpainted metal– like axles and exposed metal under paint chips– appears a dark brown almost black color. These dark colors have traditionally been found only on originals, not reproductions. Like paint chips, the dark patinas and colors previously used as a test for old cast iron no longer work for this particular reproduction.

Original models were made with two types of wheels: one, a rubber tired metal spoke version; the other a nickel plated solid iron wheel. So far, all the reproductions have had the nickel plated solid wheels shown in this article. The ends of new axles are peened, or flared, like the old and look the same.

Separating new and old racers requires attention to some very small details. Some so small you'll need a good quality loupe to see them.

First, look at the front axle. The exhaust flames are raised and lowered by bends in the axle. Look closely and you'll see dents and flat spots in the new axle. New front axles have been hammered into shape. Old axles are smooth without dents. They were made in a power fixture by bending, not hammering.

Although it might be possible to take an original axle from a damaged original racer, the axle would probably end up being obviously shorter and show tool marks from being removed. As a cross check on whether the axle is original, make sure the bends of the axle match the areas of paint wear on the arms that move the exhaust flames. If the point of contact on the axle does not align with the paint wear on the arms, the paint wear is artificial or the current axle did not make the current paint wear. On most originals, the point of contact has worn the paint to bare metal.

Next, use a 10X loupe to examine areas of paint wear. Under the loupe, you'll see that every spot of bare metal resembling paint wear on the reproductions is surrounded by regularly spaced parallel scratches (Figs. 8-10). Such marks indicate the wear is artificially created, most likely by sandpaper or a wire wheel. Normal wear appears as scratches of irregular width and random direction. Any patches or groups of evenly spaced parallel lines of regular width are virtually always a sign of artificially applied wear.

There is no practical difference between paint chips on new and old. The artificially created paint chips on the reproductions are virtually identical to the deep irregular chips found in paint on old cast iron.

Molded detail is not a reliable indicator or age for this particular reproduction. Overall the detail is very good or only varies as much as old originals vary among themselves. The only possible exception we found was in the steering wheel. A slight finning1 is present on the spokes of the steering wheel of our sample. However, this is difficult to see because the driver's body and arms almost completely hide the steering wheel. The finning on our sample was not extreme and easily missed.

The source of this reproduction is unknown. It is not clear whether someone in the United States is simply reworking and repainting a crude import or if the toy is made entirely in the US or entirely overseas. The new cars have sold on Internet auction sites, at malls, shops, shows and "estate" auctions.

What is clear is that you can't rely on traditional tests for paint and molding detail to catch this sophisticated cast iron reproduction.

This is a perfect example of the danger of basing your estimate of age on a single test. Examine and consider the full range of facts and details including logical wear and construction. Marks alone should never be used as a sole test of authenticity or age in any category of antiques or collectibles whether it's art glass or cast iron, furniture or oil paintings.

1. Finning refers to the thin sprays of metal that escape between loose fitting parts of a mold during casting.

Fig. 4 Close up of exhaust "flames". One side rises as other falls. The action is the same on new and old. New shown.

Fig. 5 Bottom of new car (shown above) is virtually identical to bottom of original. The Hubley mark appears at the rear (long arrow right). Mold numbers appear on the bottoms of the steps. The exhaust "flames" are raised and lowered by bends in the front axle (short arrow, left).

Figs. 6-7 The new front axle can be detected by tool marks which appear as flat dents. Two sides of a new front axle are shown above. The marks are made by putting bends in the axle to move the exhaust "flames" Original front axles do not have these tool marks. 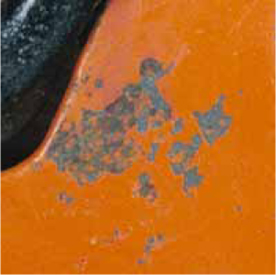 Fig. 8 At first glance, the thick paint on new Hubley racers show chips similar to those in old original paint. 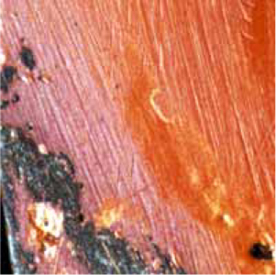 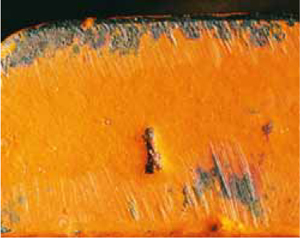 Fig. 10 Another view of regular parallel scratches indicating artificial wear. All paint wear on the reproduction is surrounded by these scratches. 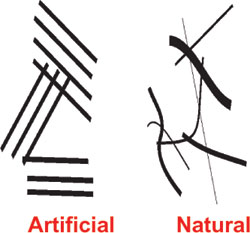 Fig. 11 Natural wear occurs over many years. The scratches left by natural wear are random in direction and vary in width and length. Artificial wear created with sandpaper, files, wire wheels or other abrasives and power tools, generally leaves an evenly spaced pattern of parallel lines of almost identical width. Signs of artificial wear appear the same on any surface and material: paint, glass, metal, wood, etc.