Many Halloween pieces described as paper mache containers are not true paper mache at all. The majority of the pieces are simply painted factory-made cardboard boxes or factory-made boxes with bits of crepe paper glued on.

Two typical new pieces are shown below. Prices for these and other similar so-called paper mache averaged about $10-$15 each.

Most vintage collectible Halloween paper mache was made before 1940 in Europe, particularly Germany. These homemade pieces are much easier to detect than the new paper mache containers made from old molds in Germany today.

Virtually all of the new paper, new white paint and new glue in these lookalike Halloween pieces fluoresce under long wave black light. Almost none of the genuine paper mache made before 1940 fluoresces under black light. 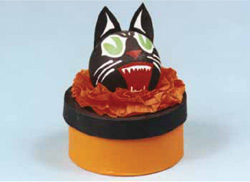 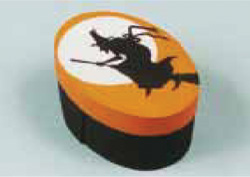