Mother of Pearl (MOP) is so named because of its lustered or "pearlized" surface. It is generally made of three layers of glass: 1–a clear outer layer; 2–a middle colored layer; and 3–an inner casing, usually white. MOP was made by blowing or placing a gather of glass into a mold to give the gather a raised pattern. This was then dipped into or rolled over the clear glass. The clear layer runs across the top of the raised pattern, trapping air in the gaps below. These trapped pockets of air reflect and spread light back through the outer surface to give MOP its glowing pearl-like luster. Some variations of MOP also used heat sensitive glass for special effects. The MOP process was patented in America and England by different companies but the technique was used widely throughout the glass industry in the USA and abroad.

Different molds created different patterns of air-trapped designs. MOP is generally named for these designs, such as Diamond Quilted and Rain Drop. Some of the other pattern names include Herringbone, Zipper, Peacock Eye, Flower and Acorn, Federzeichnung and Swirl. Original MOP is usually a pastel color such as blue, pink or apricot, but can be found in a wide range of other colors. Rainbow MOP refers to pieces with three or more separate colors that usually appear as bands or stripes.

MOP has been reproduced since the mid-1970s. Some pieces are quite crude; others, particularly pieces made in Italy, are quite good and very commonly mistaken for Victorian originals. One of the best tests to separate old from new MOP is to examine the pontil. Virtually all reproduction MOP has open, rough pontils. The great majority of Victorian MOP has ground pontils.

The most widely reproduced MOP pattern is Diamond Quilted, followed by Rain Drop, and then Herringbone. New pink and blue MOP pieces are nearly an identical color match to the old pink and blue. Colors in the new Rainbow MOP are also very similar to the originals. The new apricot color is the least like the original color and often looks brown or appears a muddy bronze.

Many pieces of reproduction MOP are made in new shapes with no Victorian counterparts. An electric lamp in new rainbow MOP from Italy, for example, was never made in any vintage MOP pattern. Other new shapes never seen in old MOP are two different bells. One is a smoke bell (Fig. 1), the other is a hand bell (Fig. 7). Both bells are in the Diamond Quilted pattern and were sold in several colors. A new MOP three-trumpet epergne is another new shape never made in Victorian MOP.

Some pieces of new Italian MOP can be identified by a unique crimping in the top rim (Figs. 8-9). Viewed from above, the crimping has the appearance of semicircles. It appears on toothpick holders, rosebowls, baskets and other shapes. No Victorian MOP has any similar crimping. Any piece with this rim is a modern product from Italy.

Another general clue to age is the overall quality of the piece. Many new applied handles, for examples, are attached without being properly centered (Fig. 11). Other new handles are noticeably much too thin and spindly to be practical. Remember, all original pitchers, cruets and other serving pieces were meant for daily use at the dinner table. Does the handle look strong enough to lift the pitcher if it were filled with water?

Once you confirm a MOP piece is genuine, be sure to give it a thorough examination for damage. The air bubbles which give Victorian MOP its unique appearance are often trapped near the surface during manufacturing. The glass is very thin around bubbles near the surface and can break very easily. This leaves jagged holes and pits which can seriously lower the value. 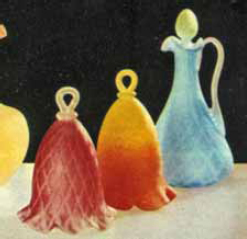 Fig. 1 New Diamond Quilted MOP in a wholesale catalog. The smoke bell shapes were never made in vintage MOP. 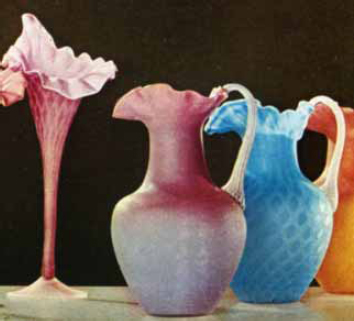 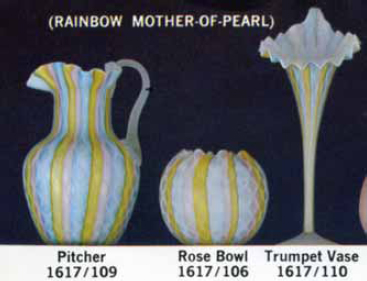 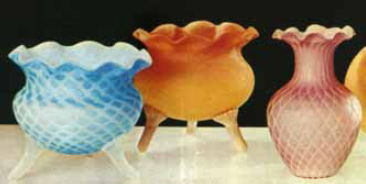 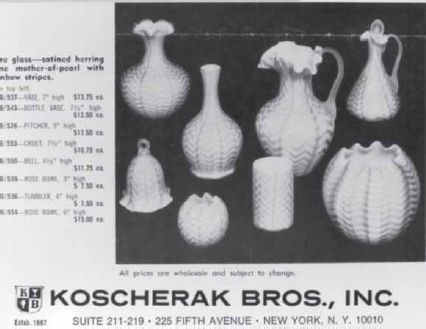 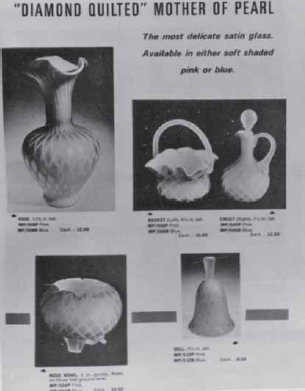 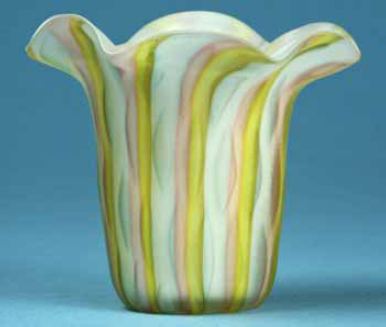 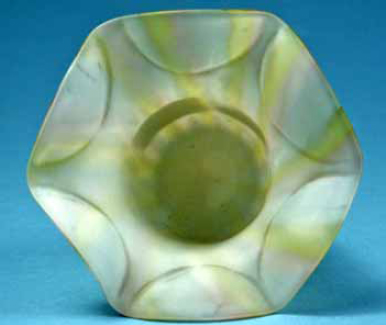 Figs. 8-9 New Rainbow MOP toothpick holder made in Italy. This new toothpick holder and many other new MOP pieces from Italy have the distinctive semicircles crimped in the top rim, Fig. 9. This crimping appears only in modern Italian glass, not in vintage MOP. 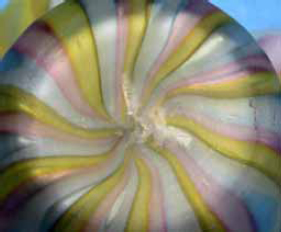 Fig. 10 The toothpick holder and most all other new MOP does not have a ground pontil. The base of this example is slightly concave because of its shape, but it's definitely not ground; the pontil rod has been snapped off.

Fig. 11 Many pieces of new MOP are poorly made. The handle on this new pitcher, for example, is not aligned with the spout. Such mistakes are common among the reproductions, but rarely found in vintage MOP. Other new pieces, especially the new cruets, have very thin spindly handles 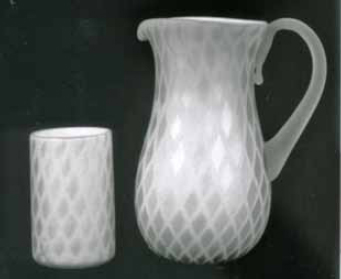 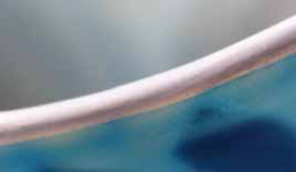 Fig. 13 The casing, or lining, of some new MOP is bright white and often spills over onto the colored outside layer. This new example shows the casing actually forming a lip around the entire top rim of a vase.