More new pottery marked McCoy has been released. Two of the pieces–a pitcher and vase–are close copies of vintage originals. Two other pieces, though, a stringholder and wall vase are fantasy items, items never made by McCoy.

The new McCoy pieces shown here as well as others, are already widespread throughout the collectibles market. When considering purchasing any of these pieces, remember that marks alone are not a reliable test of age. The new marks are virtually identical to marks found on genuinely old vintage pieces. 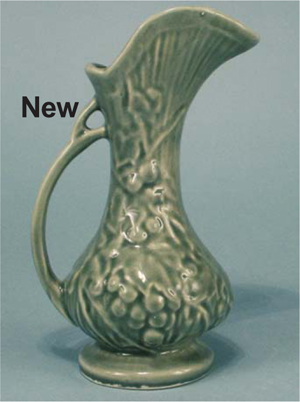 Fig. 1 New 8¾-inch berry and vine pitcher-shaped vase in green, marked McCoy on base. Available in blue, aqua, green, yellow and pink. The original was introduced in the mid-1940s in a variety of colors. Originals are 9 inches or more tall. This original pattern is often mistakenly called Grape, but grape is a another separate pattern. 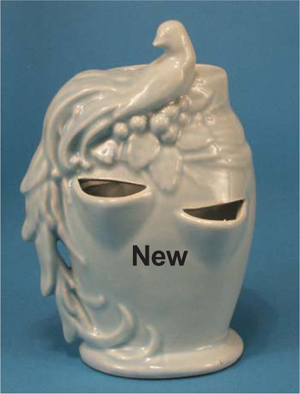 Fig. 2 New 7¾-inch strawberry-style jar with exotic bird in a monotone pale green. A raised McCoy mark on base. New pieces are available in blue, aqua, green, yellow and pink. The original was made during the 1950s. Almost all originals of this shape are two colors, not a single solid color; either an ivory vase with brown bird or green vase with brown bird. Original pieces are 8 inches tall. The mark is the same on new and old.

Fig. 3 This copy of a genuine raised molded McCoy mark appears on the new clock wall vase in Fig. 7. Most new marks are usually, but not always, exact copies of old marks. 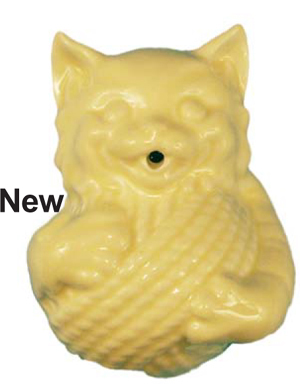 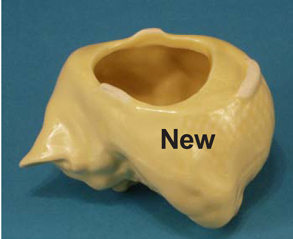 Figs. 5-6 New fantasy string-holder- marked McCoy on the back. This was copied from an unmarked 1950s wall string-holder by an unknown manufacturer. The new piece has been modified into a tabletop string-holder resting on three raised legs. The legs are shown in the view of the back in Fig. 6. The most common color of the original is a pale green. The new fantasy piece marked McCoy is sold in blue, aqua, green, yellow and pink. 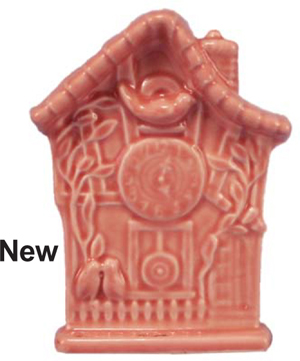 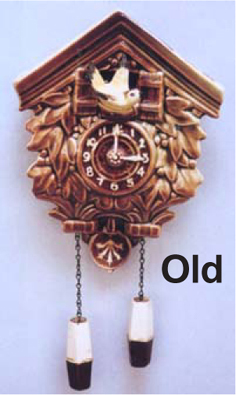 Figs. 7-8 A new fantasy "clock" wall vase marked McCoy U.S.A. on the back is shown in Fig. 7. The original McCoy clock wall vase is shown in Fig. 8. Although both old and new have a figural bird and a clock face, they are really quite different in appearance. The original has an irregular bottom and cannot be used as a freestanding vase. The fantasy piece has a flat bottom and can be used as both a freestanding vase or wall vase. Original clocks are among the most expensive McCoy wall pockets with a value of $150 to $250. Two-tone originals are worth the most. The new clocks are all monotone, available in pink, cobalt, aqua, green and yellow. The new fantasy clock is 7¼ inches tall. The clock portion of the McCoy original is 8 inches not including the chains. Originals were made in the mid-1950s. Original clock may have either Roman or Arabic numerals on the face.