The Waldorf pattern has been found on cups and saucers. The Iris pattern has been sold as a complete chamber set including basin, pitcher, chamber pot, soap dish and vase-shaped brush holder.

The original Waldorf pattern was made by New Wharf Pottery Co. of Burslem, England. New Wharf Pottery was in operation from 1878 to 1894. The old and new marks, shown below, differ only by the single word "England." England appears virtually without exception in the old Waldorf mark, but never appears in the new Waldorf mark.

The great majority of original Iris pattern was made by the English potteries of Royal Doulton, Arthur J. Wilkinson, W & E Corn, Mason's and Cauldon. The mark that appears on the new Iris is Dunn Bennett, the name of a 19th pottery located in Burslem, England, founded in 1875. The basic mark was a beehive with various wording, but some marks were initials only. From 1907 forward, "Ltd" usually, but not always, appears in the mark. A crown mark was introduced in 1937 and used through the 1950s. Dunn Bennett was purchased by Royal Doulton in 1964. 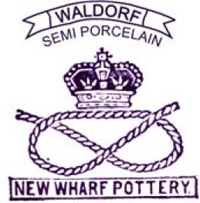 Fig. 1 (New) This mark is on new pieces with the Waldorf pattern and is practically identical to marks on vintage pieces of Waldorf. The pattern name appears in a banner at top; the company name, New Wharf Pottery, appears below. Notice that the new mark does not include "England." 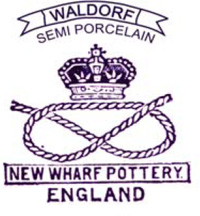 Fig. 2 (Old) Original mark found on vintage pieces of Waldorf pattern made by New Wharf Pottery. The old mark includes the word "England." If you find a piece of Waldorf by New Wharf without "England," be very suspicious of the age. 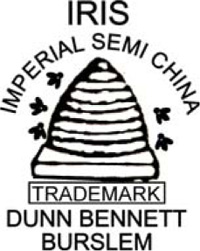