A new windup mechanism with a music box is being used to create old appearing mechanical dolls (also called automatas). Old doll parts including bisque heads, wigs and clothing are used to conceal the new body and mechanism within. Several of these dolls have been sold in the $600-800 price range; one was seen at one of the nation's largest Toy & Doll shows in June, 1994 priced at $1,400. All of the faked dolls so far have used the same type of new mechanism that is sold with a new vinyl body measuring about 15" including the base (Fig. 4-5). The mechanism is powered by a wind up music box which moves the head and arms as the music box plays. The motion resembles that of genuinely old and similar sized antique dolls by the French doll firm of Jumeau — the head moves back and forth while the arms move up and down.

The fakes seen so far have used old doll parts, such as heads and clothes, to cover the new mechanism. Clothing has been glued or sewn so tightly as to prevent the clothing to be conveniently removed for examination of the dolls body. The original wooden base on the new doll movement is also usually replaced or covered with old fabrics. Although the mechanism is shown here with a standing doll, the mechanism can also be used with a seated figure — be alert for both styles.

Detecting the New Mechanism and Body

Obviously, everyone can't carry around a portable X-ray machine but you can carry another type of scientific instrument — a pocket sized black light. Despite the use of genuinely old fabric, the modern thread used to sew the fabric produced a strong white fluorescence under long wave black light. It was easy to see that the lace in the skirt and collar as well as other trim pieces were pieced together with the new synthetic thread. Traces of new glue also fluoresced around the cuffs, hands and ankles. A painted design on the wicker basket in front also fluoresced brightly proving its recent production. (It is extremely rare for genuine Victorian-era paint, particularly paint on toys, to fluoresce.)

Another way to detect the fakes is to hold the suspected piece to a strong light. Generally, a strong light will make the pink vinyl body show through some part of the clothing particularly around the legs. You can also try to remove, separate or push back clothing from the neck, wrists and legs. If the clothing is glued or otherwise fastened in those areas or the seller refuses to allow you to inspect the body, assume the doll has been altered. Another detail to consider is the song the music box plays. Most genuine old music boxes play Victorian era tunes or the classics. If you hear Sound of Music or I Did it My Way, run!

Perhaps your best defense is a healthy suspicion. Knowing that an item can be reproduced should make you examine every purchase with care.

Thanks to Mary Gorham for her loan of the faked doll and the new doll mechanism for this article. 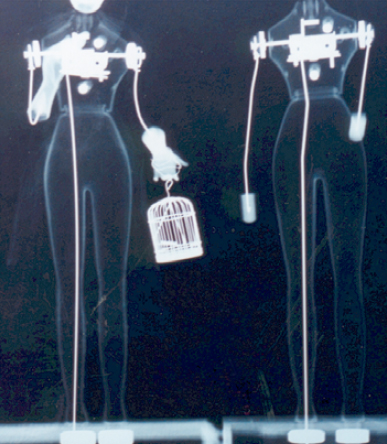 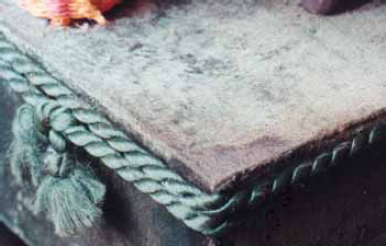 Fig. 2 Close up of simulated wear on the velvet fabric which was used to cover the base on the faked "old" doll. There is also similar wear around the wind up key in the back of the base. 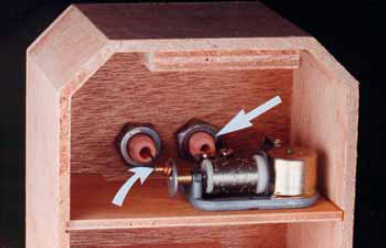 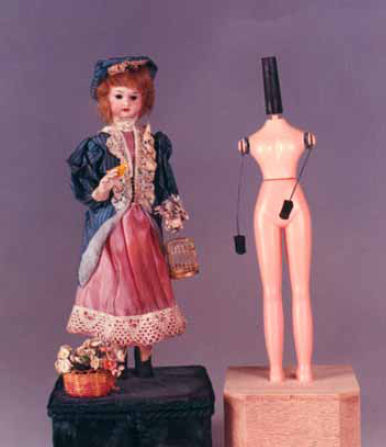 Fig. 4 The old appearing doll on the left is made from bits and pieces of old doll parts. The old pieces cover up the new vinyl doll body with new mechanism shown on the right. The new vinyl dolls, right, with mechanism cost about $50. 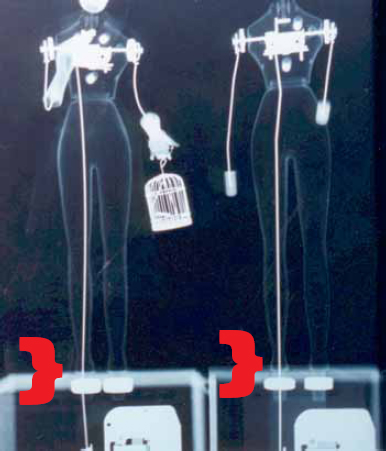 Fig. 5 This X-ray shows the mechanical movements inside the "old" doll and new doll to be identical. Note the two large steel nuts holding the legs where the body meets the base. 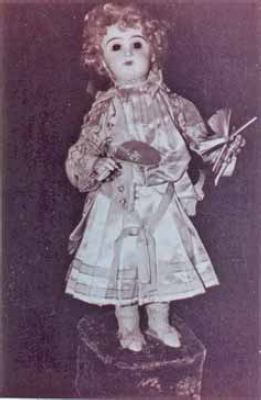 Fig. 6 An authentic 15" antique mechanical doll marked Jumeau. The doll is mounted on a velvet covered box-shaped base. The head moves back and forth; arms move up and down. The general look is very similar to the faked doll shown in this article. 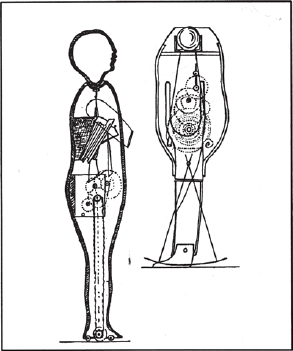 Fig. 7 Antique automata usually have fairly complicated mechanisms. This 1862 patent drawing is for a clockwork mechanism to power a walking doll. 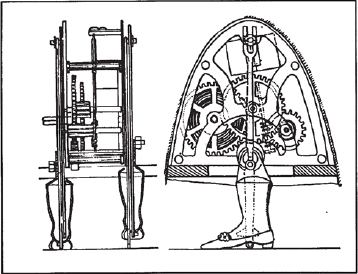 Fig. 8 Most automatas, like these shown in patent drawings, were not made by major doll companies but in small specialty shops, especially clock and watch shops. Doll bodies were purchased from the doll companies and the mechanisms added by the shops.