When forgeries of million dollar fine art are uncovered, the general media run banner headlines and bombard us with video of grim experts with shaking heads. If a particularly prominent museum or celebrity has been skewered, the story may even crowd out British royalty and make the tabloids. However, the daily loss due to fakes in decorative arts--like antique art glass--probably dwarfs the dollar amount lost on new Van Goghs and Rembrandts.

Avoiding fake and forged marks is sometimes as simple as knowing how original marks were applied: were they engraved or acid etched?... is the mark a legitimate catalog or shape number?...was the mark ever actually applied to glass or does it exist only in the mind of the forger?...when was that particular mark used?

This article looks at some of the most commonly found art glass forgeries. Under each mark covered is a list of original marks, how they were applied and some typical forgeries. Figures 4-9 are a guide to marking tools and devices and how they are used.

How do you avoid bad marks? By refusing to pay more for "marked" examples. If there were no premium paid for marks, forgers would be out of work. 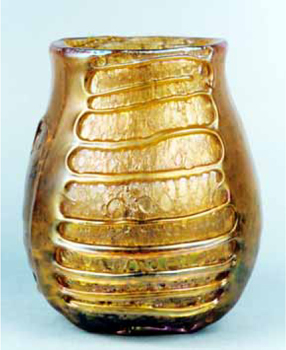 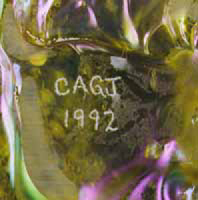 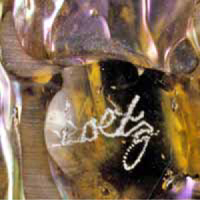 Fig. 3 The honest mark in the pontil has been polished out. The piece can now be represented as an "unmarked" authentic piece or have a forged mark applied like the one shown here.

Fig. 4 All the tools below either chip, scratch, cut or in some way alter the original reflective surface of glass. This alteration produces a frosted or matte appearance because it changes how light is reflected above. All the devices shown below work on this principle.

Fig. 5 - Rotary grinders
Ball shaped bits powered by spinning shaft. Width of line varies according to the size of the bit. Used for majority of original engraved marks; limited use on new forgeries

Fig. 7 - Electric pen
Hard metal tip vibrates from side to side. Width of mark adjustable. Widely used to forge imitations of old engraved marks. No pre-1940 engraved marks on glass were ever made with this tool.

1. Research how original marks were applied. Some were only engraved; others were used only on paper labels.
2. Examine the mark under a loupe and look for scratches. If the mark cuts through old wear scratches, the mark is recent. If old wear scratches pass through the mark, the mark was applied before the scratch was made.

Fig. 10 Scratches from normal wear go through original mark. An orignal mark is on the piece before the scratch.

Fig. 11 Forged marks go over scratches from normal wear. The scratch is there before the forged mark.

Over the years the number and quality of cameo glass reproductions has increased tremendously. Quality from Eastern Europe glass makers is coming close to the originals. To make matters worse, the majority of today's reproductions are carrying Galle marks in raised glass. Reproductions from China and Japan, although of less quality, are also marked Galle and can confuse inexperienced buyers.

Some of the best reproductions are coming from Romania. These pieces are muti-layered with raised glass Galle signatures. Colors and shapes are similar to originals. In addition to Galle, these pieces also carry a TIP mark. Tip means "type" in Romanian so a Galle-TIP mark legally means Galle-type or Galle-style which meets legal requirements. On some pieces, the TIP is appears close to the Galle mark; on others it is difficult to find. Many TIP marks are being ground off. You can detect most ground off marks with a black light. 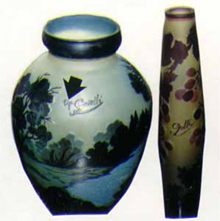 Fig. 12 TIP close to Galle mark on example at left; TIP on the reverse side of the example at right. 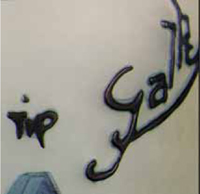 Fig. 14 Close up of TIP mark close to Galle mark. TIP is never been found on any pre-1930s cameo glass.

Fig. 16 The new Galle signature in (Fig. 17) is on about 30 different shapes including lamps, perfumes and vases like the one in (Fig. 16). They were made in Japan for antique reproduction wholesalers. The signature is the same size on all the pieces.

Fake Webb Mark
Raised in relief; no old mark like this was ever used. First reported in 1990. Found on old but unmarked glass from various makers. 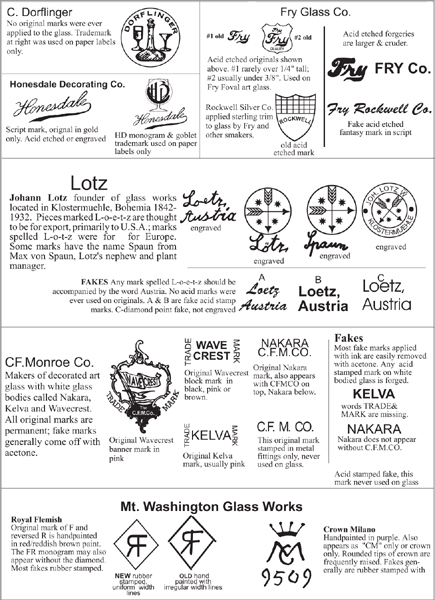 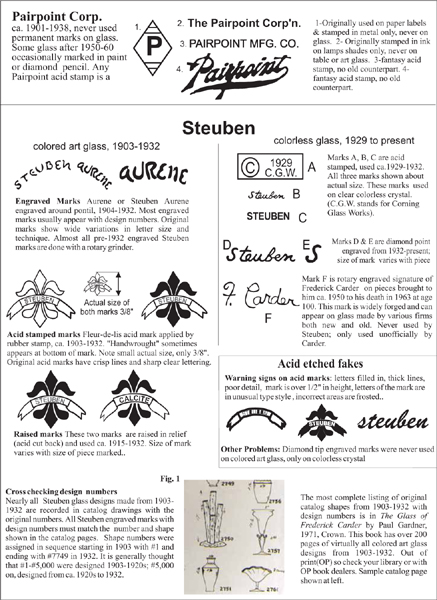 Engraved marks Original engraved marks appear on blown glass, ca. 1893-1928. There is a tremendous difference found among original engraved marks. Some are almost illegible, while others are in beautiful flowing script. Most marks are rotary engraved, while others (especially pastels) are marked with a diamond tip. In some engraved marks, all the words are spelled out, in others only initials are used. Most engraved marks also include model or design numbers with date codes (see chart below). In general, engraved marks are small with letters usually 3/16″ to 1/4″ tall on pieces up to 10-12″ in size; very rarely larger than 3/8″ on even the biggest pieces. Large, poorly spaced, badly proportioned or awkwardly located marks are highly suspect. Flat frosted acid etched Tiffany marks are all forgeries.

Tiffany Date Codes Many forgers rely on their imagination when adding letters and numbers to Tiffany marks. A letter before and after a number, for example, would indicate a fake. So would the use of two consecutive letters such as BB, etc. Use this chart as a general guide; there are always exceptions. There is considerable variation and inconsistencies among genuine old marks. 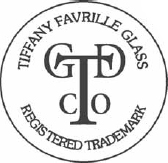 Stamped in metal from 1920 on; can include "Favrile" 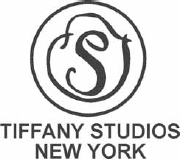 Many trademarks originally used only on paper labels or stamped into metal now appear as acid stamped marks on glass.

This mark appears only in trademark application papers; it was never used on any Tiffany products. It is now seen as an acid stamp forgery.

These three acid marks have no old counterparts: