The origin of new majolica is about evenly split between the United States and overseas. The most accurate majolica reproductions are probably from a company in Tennessee; whereas the country that makes the most reproductions is probably Italy.

There were 25 pieces of new majolica purchased for this article. And while there are bound to be exceptions (which we note later) here are some general guidelines to separate new from old.

1. Handles on new majolica--pitchers, creamers, urns, etc.--are generally hollow and form a hole where they join the body. This is because the new pieces are cast in a mold as one single unit. Handles in old pieces were made separately as a solid piece and then applied to the body.

2. The pattern on the outsides of new majolica can usually be clearly seen on the inside. This is also caused from the new pieces being cast. Old pieces were generally made by hand pressing strips of clay into a mold. Because these strips were thicker and also smoothed to remove the potter's fingerprints, the outside pattern is very seldom visible on the insides of old pieces. You may find the occasional bump or depression on the insides of old pieces but virtually never find distinct shapes such as flower petals, vines, etc. The walls of most new pieces, though, are much thinner because they have been slip cast. This thin wall follows the outside pattern and appears as the "back" of the design on the outside.

4. A bisque finish on insides and bottoms of pieces usually means a piece is new. Almost all original majolica was meant to be used. You couldn't very well serve milk out of a pitcher that wasn't glazed inside because the bisque surface could never be properly cleaned.

5. If the decoration, design or shape prevents a piece of tableware from functioning as a piece of tableware, it usually means a piece is new. Again, original majolica was made for every day use. Reproductions are made to be looked at. If a piece appears impractical or too delicate to be used at a 19th century dining table, it is probably new.

The new pitcher in Fig. 2 illustrates several of the guidelines. First, the handle is hollow and there is a hole where the handle joins the body (Fig. 4). Next, looking into the pitcher you can clearly see the pattern that is on the outside (arrow-Fig. 3). Finally, look at the top rim and notice the overhanging edge towards the inside. Pouring liquid out of this piece isn't practical because the rim would catch the liquid as it's poured.

Most rules generally apply to all pieces regardless of shape but there are exceptions. The most frequent exception seems to be with basically flat shapes such as trays, plate and platters. Virtually all old pieces in those shapes (Fig. 10) have smooth sided bottoms but so do most new pieces in those shapes. The new trays in Fig. 13 and Fig. 18, for example, both have smooth sided bottoms. However, the bottom sides on both are colored a solid white, which indicates their recent manufacture.

New pieces made in new molds taken from old originals can include the old marks that are on the originals. The new pitcher in Fig. 1, for example, carries the old Etruscan mark. The new mark by itself, even though blurred, isn't particularly suspicious since marks on genuinely old majolica are often covered over with glaze or smudged by careless molding. Looking beyond the mark, the pitcher's hollow handle and its visible pattern inside gives you enough more information to judge it as new.

Although no other pieces among our five samples from this particular manufacturer had an old mark, you should assume other new pieces with old marks exist (this same firm made over 80 different shapes, most all of which were based on old originals).

The only consistently applied new mark on our samples was an incised pair of letters, M and W (see Fig. 14). Most of the better majolica reproductions are being made by this firm so look carefully for the MW mark or the possible removal of the MW mark.

Colored and painted bottoms don't necessarily guarantee a piece is old (see Figs. 14-16) nor is weight alone a reliable indicator of age. True, many new pieces, particularly ones with hollow handles, are lighter than old counterparts but many new pieces, particularly plates and trays are also very nearly identical in weight to originals. Neither do old marks, old colors, or old patterns guarantee a piece of majolica is old.

Your best protection is not to rely on any one test or guideline but to base your decision on as many tests and general guidelines as possible. 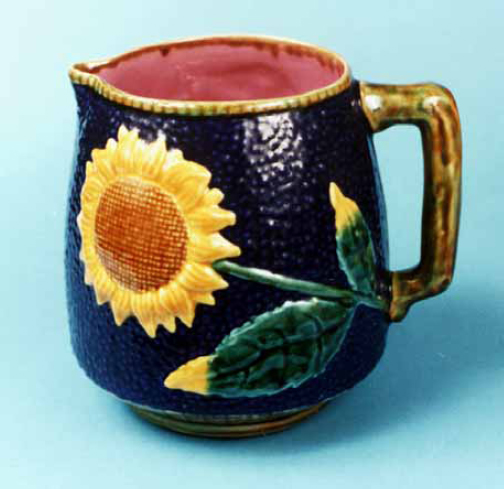 Fig. 1 A new Sunflower pattern pitcher. The mold for the new pitcher was taken directly from an old original. The mark of the original pitcher's maker, Etruscan Majolica, appears on the bottom of this new pitcher. 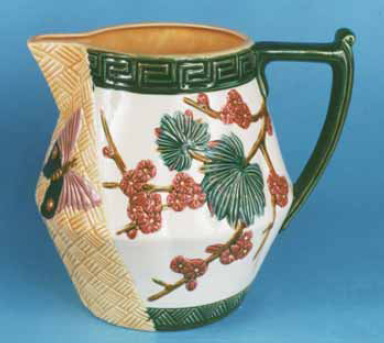 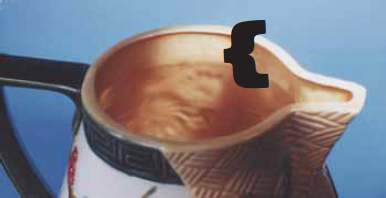 Fig. 3 The outside pattern is clearly seen on the inside. 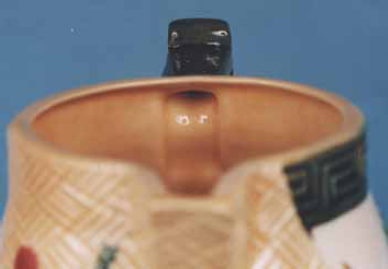 Fig. 4 There is a hole where the handle joins the body. 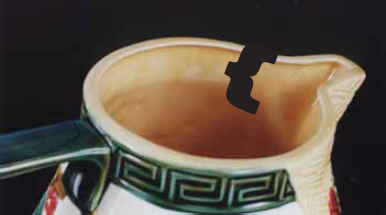 Fig. 5 Common sense tells us this overhanging edge along the top rim is not practical. The rim would catch liquids as they were poured. 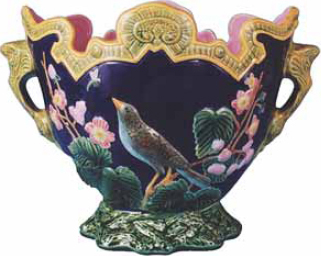 Fig. 6 This piece is painted in authentic period colors with a pink interior, a cobalt blue exterior background, a multi-colored bird with multi-colored pastel flowers. 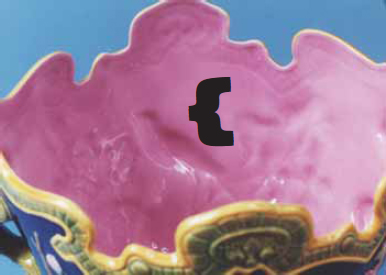 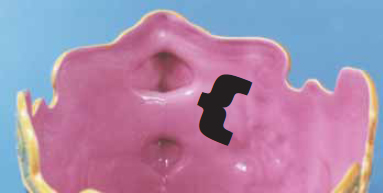 Figs. 6-8 New majolica comes in all sizes from small eggcups to large urns and vases. The bird and insect flower pot, or cachepot, in Fig. 6 is one of the larger new pieces measuring 12" across the handles, 9" high and 8" deep. Looking inside, you can clearly see details from the pattern on the outside such as the bird and flowers (Fig. 7). You can also see that the hollow handles form a hole where they join the body (Fig. 8). 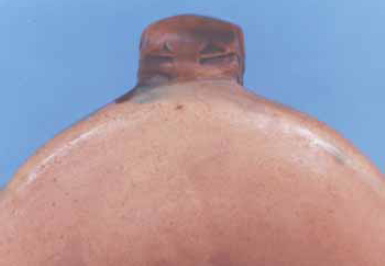 Fig. 9 There is no hole where the solid handles of old pitchers join the body. 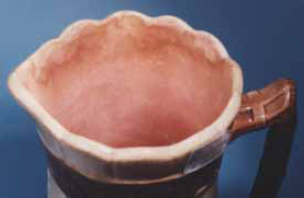 Fig. 10 The thicker sidewalls of old majolica are generally smooth and do not show the pattern that is on the outside . 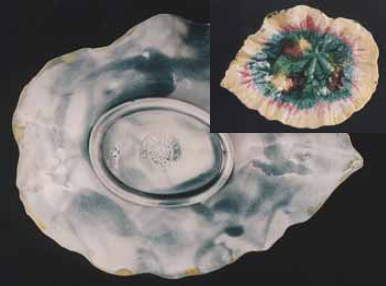 Fig. 11 The bottom of a typical old piece with hand sponged coloring. The bottom is smooth and doesn't show any of the highly textured pattern from the other side (shown in inset). 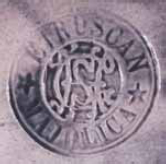 Fig. 12 This exceptionally clear old Etruscan Majolica mark is the same mark as on the new pitcher on the front page. The new mark is blurred with glaze but it is a copy of this old mark. It is not unusual for genuinely old Etruscan marks to be as blurred as the new mark appears. 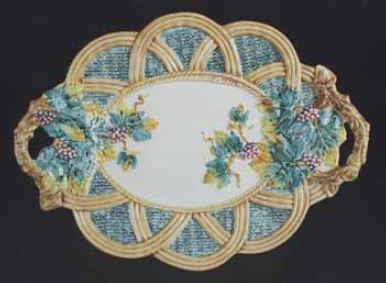 Fig. 13 This new 16x12" tray copies Wedgwood's old Basketweave and Grape Leaf pattern. It has a solid colored white bottom. Made in Italy. 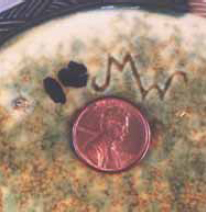 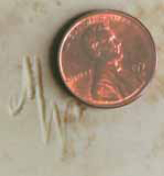 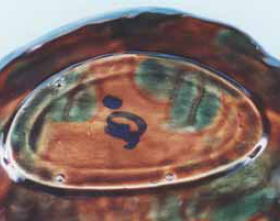 Figs. 14-16 The firm making the better quality copies fortunately marks their ware with the incised letters MW shown above about actual size. Notice how the mark varies from piece to piece. Also note the new bottoms in both Figs. 15 and 16 are daubed with paint similar to bottoms on old pieces. Both also have random letters and numbers in cobalt blue--obvious in Fig. 16, smudged (above the penny) in Fig. 14.

Some examples of new majolica 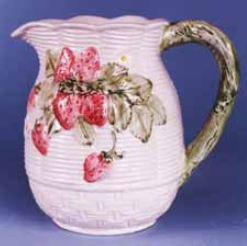 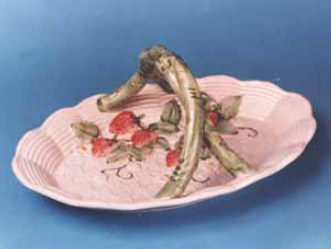 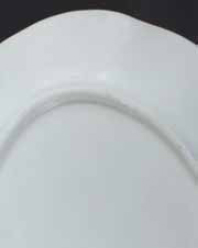 Figs. 17-19 The new 9" strawberry pattern pitcher (Fig. 17) has a matching 13" handled tray (Fig. 18). This is not a direct copy of an old pattern but a new pattern in the general style of an old majolica pattern. The pitcher has a hole in the side where the hollow handle joins the body and the bottom is unglazed bisque. The bottom of the tray is glazed but pure white, Fig. 19. Only marked with a "Made in Italy" paper label. 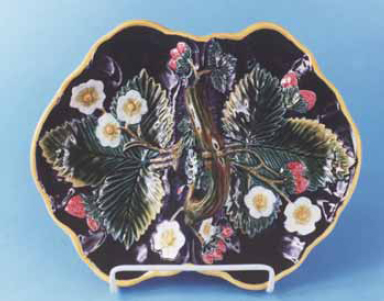 Fig. 20 A 10 x 8" cobalt blue copy of an original Strawberry Blossom pattern tray. The incised MW mark on the bottom. 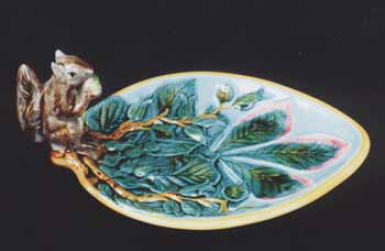 Fig. 21 A 9" tray with 3" figural squirrel. Copied from a George Jones original. The incised MW mark on the bottom. 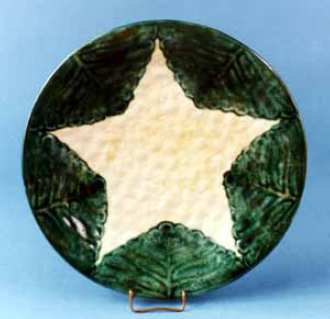 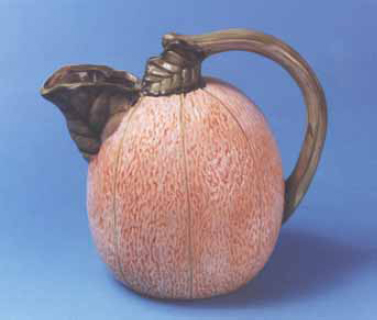 Fig. 23 New 7" pitcher copies a Minton original. There are holes where the handle joins the body.