A new group of Disney character toys designed to look like vintage 1930s toys was imported from China.

Among the pieces reproduced are metal character windups, character dolls with movable arms and legs, and character figures made of painted wood. All the Mickey and Minnie faces in this new group have the so-called "pie-eyes," black pupils with wedge-shaped gaps. Since the eyes of Disney characters changed over the years, the appearance of the eyes is an important clue to age. The vast majority of original pie-eyes appear on the very earliest toys made ca. 1930-1935.

One of the easiest clues to remember about these toys is that no vintage toys were marked China. The vast majority of Disney toys from the 1930s were marked Japan, USA or Germany.

Another easy way to date the toys is to keep in mind the various changes in how the Disney name appears on licensed products. Licensed products up to 1939 read Walt Disney Enterprises, often abbreviated WDE or Walt Disney Ent. After 1939, the name appears as Walt Disney Productions or WDP. The copyright symbol, ©, may or may not appear with any of these early marks. The licensing mark on the toys shown here, © Disney only, is not generally found on genuine pre-1950 officially licensed Disney toys. 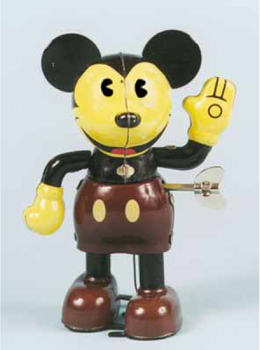 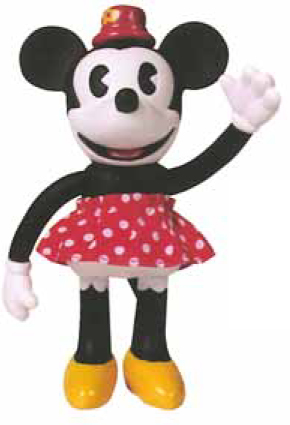 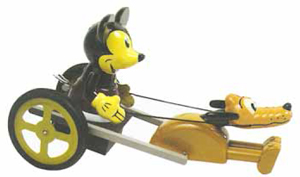 Fig. 4 Mark on new metal windups. Vintage 1930s Disney character toys were never made in China. Any Disney toy marked Made in China was probably made since the 1980s. Imported by Young Epoch. 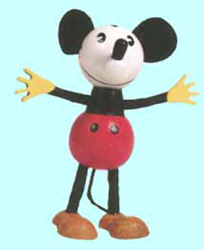 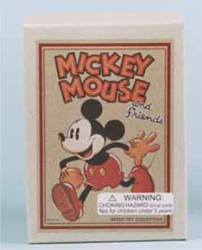 Fig. 7 New toys come in vintage-style boxes. Red, black and white label on lightweight gray cardboard box. Choking warning label has appeared on toys only since the mid 1980s-early 1990s. These labels are an obvious clue to a recently made product.