A $24 kitchen tool from India has been widely represented as an early American "herb crusher" priced at $350 to $950. A Michigan dealer of 37 years experience told ACRN she saw these new pieces at five separate shows in one week in Vermont. One dealer told her he turned down $400 for his example.

The two-piece device includes a 15-inch cast iron trough and a separate 6-inch iron cutting wheel with wood handles. It is purportedly used by placing herbs in the trough and running the wheel back and forth.

So far, no vintage American piece of a similar form can be documented. No matching examples have yet been found in auction catalogs or reference books. The vintage American form that comes the closest is a tabletop-sized chopper (Fig. 4) called a roller knife. This piece was used primarily in apothecary shops to shred large roots, branches and leaves.

The only old similar trough and wheel forms located so far are Asian in origin, specifically China. The vintage Asian pieces are discussed at some length in Linda Campbell's 300 Years of Kitchen Collectibles, 5th Edition (Krause Publications).

But this new piece shouldn't easily be confused with old pieces from Asia. Legs are attached with crude arc welding which is unlike any vintage construction (Fig. 2). The new wood handles are fastened to the circular blade with industrial glue which fluoresces under long wave black light (Fig. 3). Wood handles in vintage kitchen implements, American or Asian, were never originally attached with glue. 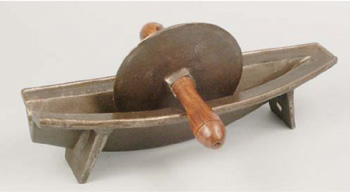 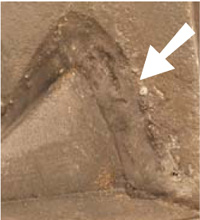 Fig. 2 Legs are joined to the new trough with crude welds.

Fig. 4 A vintage 19th century six-bladed commercial "roller knife" made of round steel blades with wood handles. This tool was most commonly used by apothecary shops to cut large roots and stems. This illustration appears in the catalog of W. Weber of Evansville, Indiana. It is discussed in The Pill Rollers by LC Richardson, a book on apothecary antiques and drug store collectibles.